Research in Australia and internationally has documented poor health and wellbeing among LGBTQI people compared to heterosexual people. What’s less understood are the reasons why.

A dominant theory, the minority stress model, suggests that the discrimination and stigmatisation experienced by LGBTQI people in their everyday lives are to blame.

While several studies have been conducted to back up these claims in the US, my recent research with student Abram Todd at The University of Queensland is the first to examine this issue in Australia.

Our study is partially based on the results of the 2017 same-sex marriage postal survey, made publicly available by the Australian Bureau of Statistics.

We determined where stigmatisation of LGB communities might be highest by identifying those electoral divisions that recorded the highest shares of “no” voters—defined as the number of people voting “no” out of the total number of people in the electorate invited to vote. To determine areas with low stigmatisation, we tracked the electoral divisions with the lowest shares of “no” voters.

We then linked these electorate data to a national social survey of Australians aged 15 and older, the Household, Income and Labour Dynamics in Australia (HILDA) Survey. The HILDA Survey contains information on the sexual identity, health and wellbeing of 15,986 respondents, of whom 554 identified as lesbian, gay or bisexual. (The survey did not ask respondents whether they identified as transgender, queer or intersex.) 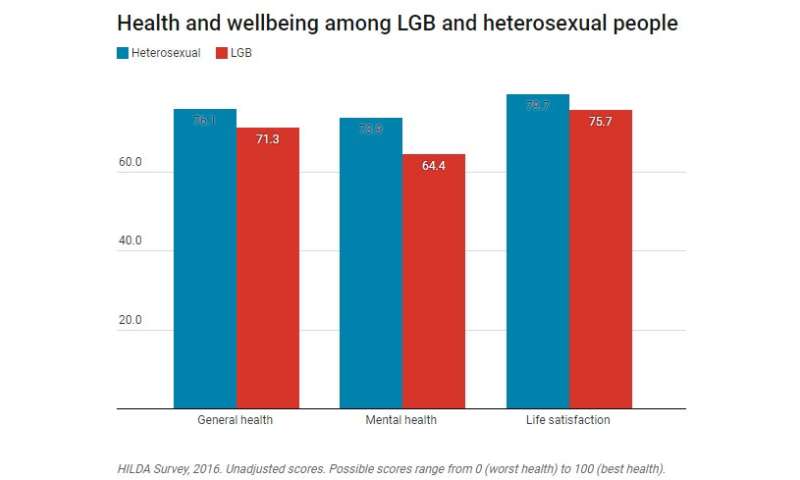 We examined the health and wellbeing of the people who responded to the survey using three standard measures:

The key question is: to what extent do these health and wellbeing scores vary according to where people live and the levels of stigmatisation in their communities? To answer this, we factored in our proxy measure of stigma – the percentage of “no” voters in each electorate in the same-sex marriage postal survey. 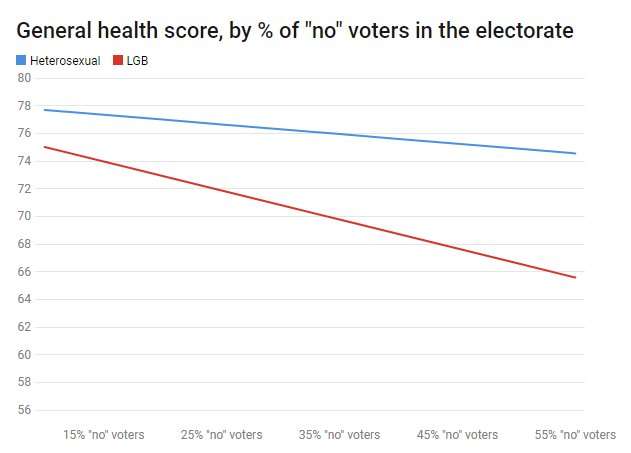 It is worth stressing that our estimates come from statistical models adjusting for a host of individual characteristics (such as age, gender or education) and electorate factors (such as unemployment rates and median income) that could otherwise bias the results.

Social support: A missing piece of the puzzle

In our study, we also tested whether perceived social support (friendships, good social relations and strong networks) contributed to the observed link between stigma and LGB health and wellbeing. 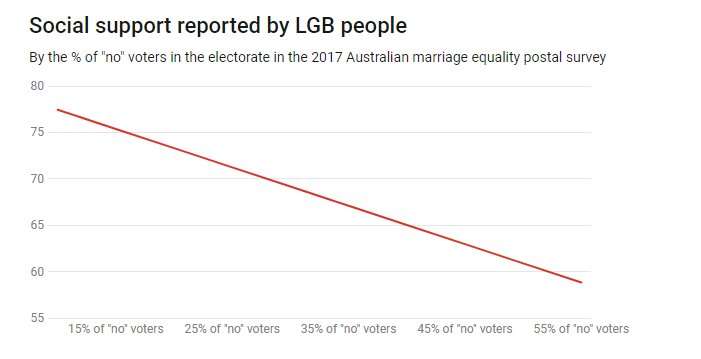 Additional statistical models revealed that these deficits in social support were key to explaining why LGB people fared worse in high-stigma areas.

What does it all mean?

Our findings are consistent with the notion that the disadvantage experienced by LGB people in society stems from social environments that are hostile to them.

Even within a relatively progressive country such as Australia, the lack of acceptance of LGB people and the dearth of social support that they receive are to a large extent responsible for their overall poor health and wellbeing.

Inclusive policies, such as the same-sex marriage provision, undoubtedly contribute to improving the visibility of LGB people and normalising their life experiences.