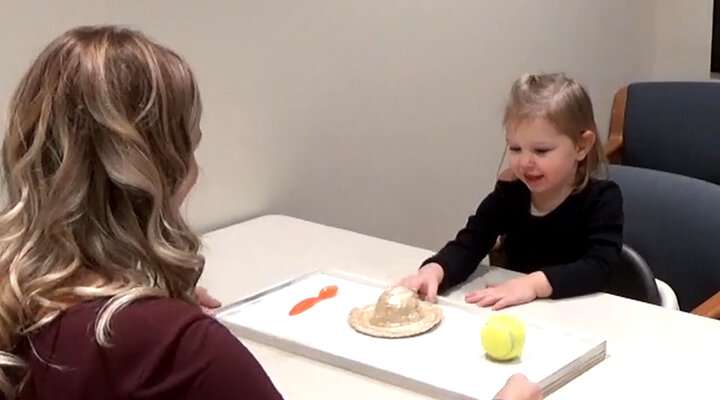 Children may learn new words better when they learn them in the context of other words they are just learning—according to new research from the University of East Anglia.

Researchers investigated how 18-24-month-olds learn new words—in the context of words they already know well and those they don’t.

The findings help explain how children learn new words and suggest a new way that parents and carers could help boost language development.

Dr. Larissa Samuelson, from UEA’s School of Psychology, said: “We wanted to find out more about children’s ability to learn and remember new words.

“Previous work suggests that when children hear a word they do not know and an object they have never seen in the context of some objects that they can already name, such as a toy or a ball, they guess the new word refers to the new thing.

“We wanted to know if the strength of a child’s knowledge of familiar things, how well they know what ‘cars’ or ‘balls’ are, mattered for learning new words and remembering them.

82 children took part in the study. In two experiments the team taught them some new words for things they couldn’t name—such as honey-dippers and strainers.

Dr. Samuelson said: “We practiced these new words until they knew the honey-dipper was called a ‘zeb’ and the strainer was a ‘yok.” We then showed them a new thing—a bird toy—in the context of either the objects they knew well—a ball and a car—or things they had only just learned to name—the ‘zeb’ honey-dipper and ‘yok’ strainer.

“When we asked them to get the ‘blick,” they were good at linking this new word to the bird-toy when it was presented with the familiar things, and with the just learned things.”

But, after a five minute colouring break, the children were not so good at remembering what a ‘blick’ was when they had learned it in the context of objects they already knew.

“It was really surprising that when we asked them to get the ‘blick’ after a short break, they did better when they had initially leaned the word in the context of the less well-known things—the ‘zeb’ honey dipper and the ‘yok’ strainer.

“We had expected that a stronger knowledge of familiar words would be better for learning new words, but we found the opposite was true.

“This tells us new things about how children use the words they know to learn new words.

“Our previous research has shown that even though two-year-old children are very good at making new word-object links, they don’t always remember them. But if we let them play with the new objects for just a bit—as little as a minute—before they make the link, it helps.

“Also, when they are just a bit older at 30 months, they can remember the links better.

“This new work suggests another way we might be able to help boost children’s ability to remember new word-object links—by teaching them in the context of other things that they are just learning.