Diabetic retinopathy is a retinal microvascular disease that often causes blindness in adults who have had diabetes mellitus for 10 years or more. Estimates are that 600 million people will have some sort of diabetic retinopathy by 2040. Previously, no good animal models existed that scientists could use to study the disease, its diagnosis or potential treatments. Now, a team of researchers led by the University of Missouri has employed a mouse model exhibiting diabetic retinopathy symptoms that could lead to future translational research studies.

“Diabetic retinopathy is a common retinal complication of diabetes mellitus that can be categorized in different stages in humans,” said Shyam Chaurasia, an assistant professor of ophthalmology and vision sciences research in the MU College of Veterinary Medicine. “Multiple interlinked pathways—including malfunctions in the immune system—lead to cellular damage. These vascular and neuronal abnormalities in the retina lead to ‘blind spots’ and complete blindness. With the prevalence of diabetes reaching record levels, it is important to develop the tools needed to combat this disease.”

Using advanced retinal imaging techniques, the scientists tested these diabetic mice that processed NLRP3. Using a new technique called laser speckle flowgraphy, the group was able to create the “heat map” of blood flow volume and found significantly decreased levels in the NLRP3 mice. These mice also showed an increased prevalence of a buildup of macrophages in the retina that could be caused by immune responses involved in chronic inflammation that leads to diabetic retinopathy. 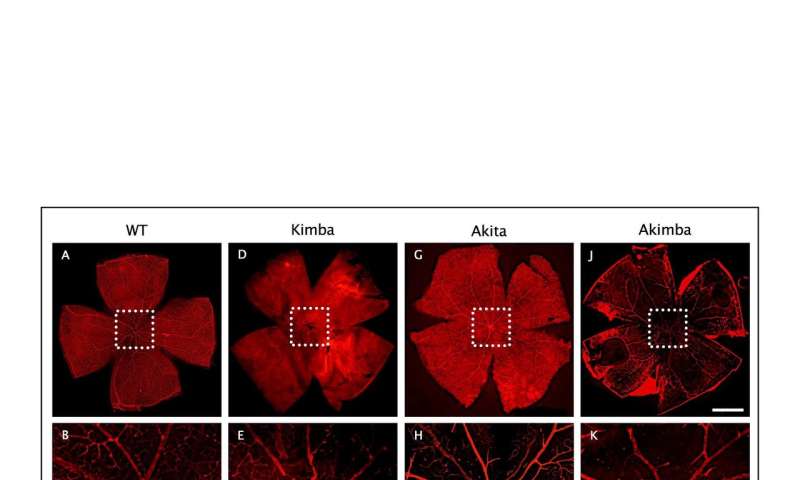 “Several new techniques and potential diagnostics are demonstrated in this study for the first time, including the laser speckle flowgraphy technique, which may prove useful in the diagnosis of human DR,” Chaurasia said. “This is the first study to show that the activation of the NLRP3 inflammasome is involved in the proliferative changes observed during DR progression, proving that this mouse model could be useful in screening potential drugs to fight the disease.”