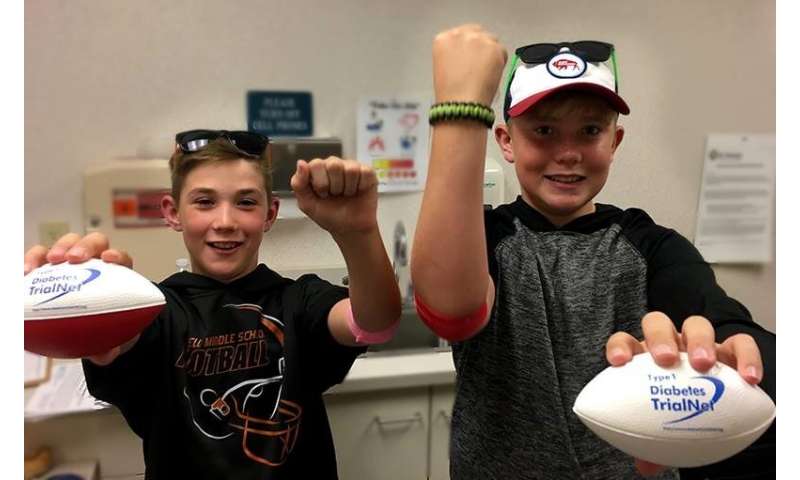 A treatment affecting the immune system effectively slowed the progression to clinical type 1 diabetes in high risk individuals, according to findings from National Institutes of Health-funded research. The study is the first to show that clinical type 1 diabetes can be delayed by two or more years among people who are at high risk. These results were published online in The New England Journal of Medicine and presented at the American Diabetes Association Scientific Sessions in San Francisco.

The study, involving treatment with an anti-CD3 monoclonal antibody (teplizumab), was conducted by Type 1 Diabetes TrialNet, an international collaboration aimed at discovering ways to delay or prevent type 1 diabetes. Researchers enrolled 76 participants ages 8-49 who were relatives of people with type 1 diabetes, had at least two types of diabetes-related autoantibodies (proteins made by the immune system), and abnormal glucose (sugar) tolerance.

“The difference in outcomes was striking. This discovery is the first evidence we’ve seen that clinical type 1 diabetes can be delayed with early preventive treatment,” said Lisa Spain, Ph.D., Project Scientist from the NIH’s National Institute of Diabetes and Digestive and Kidney Diseases (NIDDK), sponsor of TrialNet. “The results have important implications for people, particularly youth, who have relatives with the disease, as these individuals may be at high risk and benefit from early screening and treatment.”

“Previous clinical research funded by the NIH found that teplizumab effectively slows the loss of beta cells in people with recent onset clinical type 1 diabetes, but the drug had never been tested in people who did not have clinical disease,” said Kevan C. Herold, M.D., of Yale University, the study’s lead author. “We wanted to see whether early intervention would have a benefit for people who are at high risk but do not yet have symptoms of type 1 diabetes.”

The effects of the drug were greatest in the first year after it was given, when 41% of participants developed clinical diabetes, mainly in the placebo group. Many factors, including age, could have contributed to the ability of teplizumab to delay clinical disease, since at-risk children and adolescents are known to progress to type 1 diabetes faster than adults. Faster progression of type 1 diabetes is associated with a highly active immune system, which may explain the impact of immune system-modulating drugs like teplizumab.

Other data collected from the trial may help researchers to understand why certain people responded to treatment. Participants who responded to teplizumab tended to have certain autoantibodies and other immune system characteristics. The research team also cautioned that the study had limitations, including the small number of participants, their lack of ethnic diversity, and that all participants were relatives of people with type 1 diabetes, potentially limiting the ability to translate the study broadly.

“While the results are encouraging, more research needs to be done to address the trial’s limitations, as well as to fully understand the mechanisms of action, long-term efficacy and safety of the treatment,” said Dr. Spain.