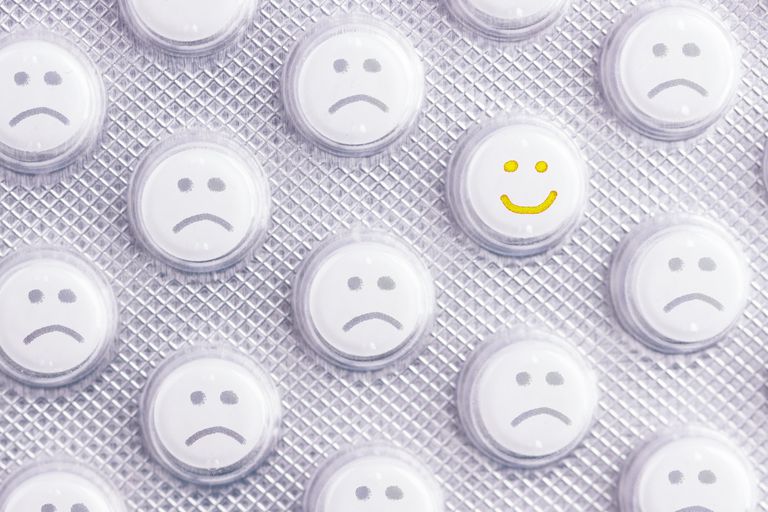 It might seem unfair that the drug you’re taking to relieve your depression is now giving you insomnia. Seriously: WTF!

But yeah, that’s just one common Wellbutrin side effect that can affect people who take this medication.

Don’t get me wrong, Wellbutrin (and antidepressants in general) do a lot of good—but it’s always smart to be aware of the downsides, too.

Unlike other antidepressants, like selective-serotonin reuptake inhibitors (SSRIs), which include Zoloft, Prozac, and Lexapro, Wellbutrin is in its own class. It’s a norepinephrine-dopamine reuptake inhibitor (NDRI). “It doesn’t actually affect the serotonin system. It affects norepinephrine and dopamine neurotransmitters in the brain,” says Ackerman, explaining that dopamine helps control the brain’s reward and pleasure centers.

Doctors also prescribe it to help wean smokers off of nicotine, says Ackerman. “The mechanism of how it impacts nicotine cravings is not entirely clear,” Ackerman says. “But it does reduce cravings in patients and you can see people who are entirely able to quit.”

But, as with most drugs, there are a few Wellbutrin side effects that you should definitely not ignore.

Doctors may choose Wellbutrin for patients whose depression symptoms are more “melancholic” or “sluggish,” says Ackerman, because it can give patients a boost energy-wise. “It can be like an extra cup of coffee,” she says.

Some women, however, may find it actually revs them up too much, increasing anxiety. If that happens, talk with your doctor right away about trying a new drug, advises Ackerman.

2. Your heart is going a mile a minute.

Some people may experience heart palpitations, called tachycardia (more than 100 beats per minute), while on Wellbutrin, says Ackerman. If this happens, tell your doctor ASAP. They’ll likely order an electrocardiogram (EKG or ECG), a test that measures the electrical activity of your heartbeat to check for underlying heart issues, says Ackerman.

When u add Wellbutrin to the mix pic.twitter.com/HgpecSUWBQ

It’s fairly common for Wellbutrin-takers to experience insomnia, a.k.a. difficulty falling asleep or staying asleep, but keep an eye on it to make sure it doesn’t start interfering with your daily activities. “If someone’s really having issues, they may have to switch drugs,” says Ackerman.

“The most serious side effect we worry about with Wellbutrin is the increased risk in seizures, especially in certain sub-populations like patients with eating disorders, particularly bulimia,” says Ackerman.

There’s also an increased risk of seizures with Wellbutrin if you have a pre-existing seizure disorder or a brain tumor, she adds. If this happens, let your doctor know right away.

I stopped taking Wellbutrin and now I can drink real coffee again without feelin like I’m gonna have a conniption? Coffee is real good y’all

Because Wellbutrin can amp up some women, caffeine—like your daily latte or diet soda— may make you feel over-the-top jittery, says Ackerman. If you start to notice this symptom after taking Wellbutrin, cut out caffeine while you’re on the medication, or go decaf until you’re off the drug.

6. You’ve got tons of energy all of a sudden.

This can be a perk of the drug for women who want to feel more energized. But Ackerman warns: “There’s a risk of flipping someone into hypomania [a mild form of hyperactivity] or mania if they have an underlying bipolar disorder.” It’s for this reason, Ackerman adds, that Wellbutrin wouldn’t be used in bipolar patients, unless it was paired with a mood stabilizer.

7. You don’t even want to think about food.

#MentalHealth Update: other side effects of the Wellbutrin have kicked in. Namely: not feeling hungry, better focus. 😀

While it’s less common, diminished hunger and weight loss can come with Wellbutrin use, too, says Ackerman. But this side effect, and a dampened sex drive, are actually more common with other antidepressants, specifically SSRIs, adds Ackerman.