Surgeons have removed the lid of a pressure cooker that became embedded in a woman’s skull.

Rich Kaur reportedly woke in the early hours of July 23 to use the bathroom of her Mumbai home.

Ms Kaur, who is partially sighted, slipped on cutlery lying on the floor outside her kitchen, causing her to fall and bang her head on the cooker.

The lid’s whistle, which indicates when the cooker is too hot, penetrated her skull and became lodged in her brain, local media states.

Ms Kaur was rushed to hospital where surgeons spent two hours removing the lid.  She is said to be stable, conscious and talking. 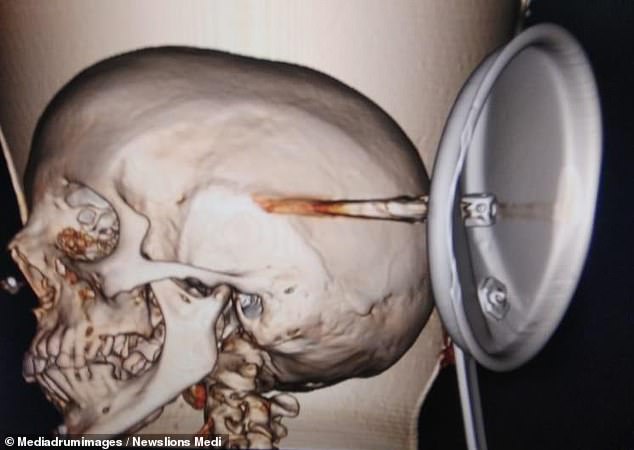 The lid’s whistle, which indicates when the pressure cooker’s temperature is too high, penetrated her skull and became lodged in her brain (seen in the scan)

Ms Kaur’s daughter Lakhwinder claims her mother has cataracts that cloud her vision and caused her not to notice the cutlery.

‘When she fell, her head hit the lid of a pressure cooker,’ Lakhwinder told the Mumbai Mirror.

‘The whistle on the lid got dislodged and the protruding rod under it poked through her skull.’

Ms Kaur’s family took her to Santacruz General Hospital, where she was referred to SION Hospital.

Lakhwinder did not expect her mother to survive as she watched her wincing in pain, the newspaper reported.

Ms Kaur arrived at SION at around 2.30am local time. Neurosurgeon Dr Batuk Diyora was quick to get to work. 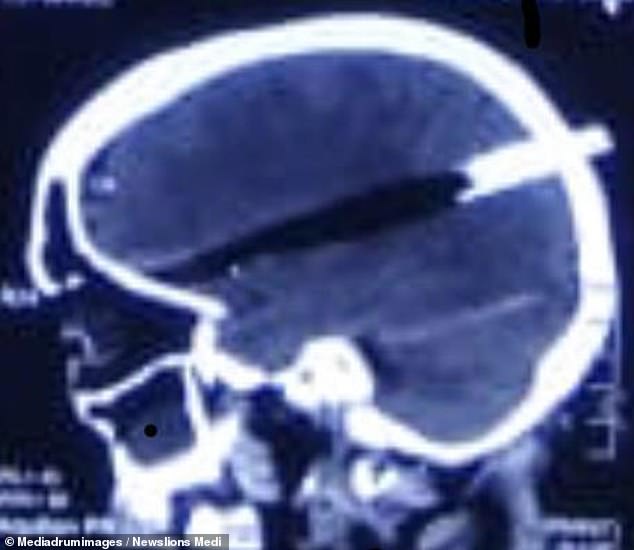 The extent of Ms Kaur’s injuries meant she could not properly lie down during the surgery. She also had shattered pieces of bone at the base of her wound, which raised her risk of infections

The injury meant Ms Kaur could not lie down properly, which made the operation difficult.

Medics also struggled to insert tubes down her throat to maintain her breathing.

And she had small pieces of shattered bone over the base of her injury, which increased her risk of infections.

Despite the complications, Dr Diyora and his team managed to remove the lid and ‘take care of internal injuries’. It is unclear what these were.

‘The patient is fully conscious, able to talk and out of danger’, Dr Diyora said.

Ms Kaur’s sister Manjeet claims she would have taken her to a private hospital if they could afford it.

She added, however, the public hospital’s ‘good service’ was a ‘pleasant surprise’.

A man has ‘miraculously’ survived after plunging a sharp knife deep into his skull without sustaining brain damage.

Yury Zhokhov, 41, claimed he wanted to make another hole in his head because he could not breathe properly through his nose.

Police found the Russian man kneeling in a field with the eight inch kitchen blade buried deep in his head.

‘He was fully conscious,’ said a law enforcement source in the Russian town of Donetsk in Rostov region.

‘My nose was not breathing. I pierced my head to breathe,’ he said.

X-rays taken after he was rushed to hospital show how deeply the knife had pierced his head – with medics saying it was a ‘miracle’: he had not killed himself or suffered acute brain damage.

Surgeons removed the knife and say the man is alive but in a ‘grave’ condition because of the risk of infection, say doctors.

The astonishing scene was filmed on a police video as shocked officers arrived at the scene and realised how at least five inches of the blade was embedded in the head of a man known locally as Yura.