Why washing your weekly shopping probably does nothing to protect you from Covid: Virus seems to be airborne and isn’t generally transmitted via surfaces, evidence suggests

Be honest. Are you still washing your grocery shopping? Along with bulk-buying loo roll, it always seemed like Covid overkill to me.

But I know a fair few people (even doctors) who, back in the early days of the pandemic, did do it, ‘just to be on the safe side’.

My mum’s shielding neighbours took to quarantining their post for two days to allow for decontamination. Meanwhile, canny cleaning firms seized on the opportunity and began offering special coronavirus services that came complete with a ‘sterilisation certificate’.

In our office, the cleaning staff are still being tasked with wiping down every photocopier, fire extinguisher and lift button with disinfectant on an endless loop. No surface is too obscure.

Public toilets were closed – many still are – and Tesco even banned giving out plastic cutlery in its panic to reduce the perceived Covid risk of multiple people handling the same things.

Is any of this really necessary? The answer is probably not. Or, at least, not if you’re trying to avoid the virus. 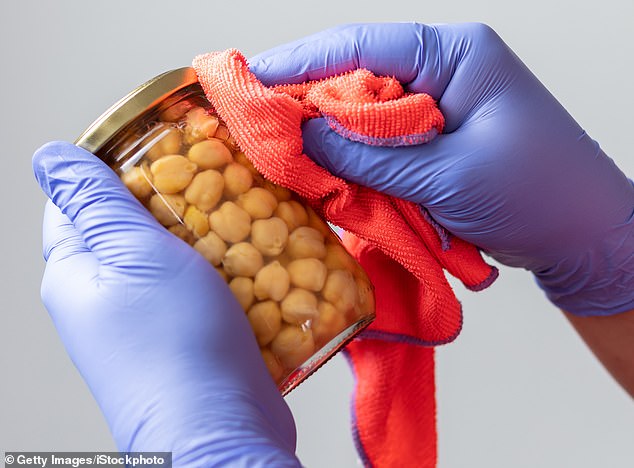 I know a fair few people (even doctors) who, back in the early days of the pandemic, did wash their grocery shopping, ‘just to be on the safe side’, writes Barney Calman

So at the very least, all this ‘hygiene theatre’ is likely to be a waste of time. But, at worst, it could be creating a false sense of security and distracting people from the real risks.

So how did we get here? A year ago, when Covid hit, there was the idea that it could be picked up from surfaces. Someone infected with the virus could cough or sneeze and spray virus-laden droplets on to surfaces or their hands and touch things. And we could pick up the infection by coming into contact with them.

There was even an NHS-backed advert depicting the virus as dayglow paint smeared over a mobile phone, door handle and coffee cup.

But scientists who know about these things now agree this isn’t where the true risk lies.

It’s still prudent to keep your hands clean, of course, but our understanding of Covid has moved on and evidence seems to suggest it is airborne.

When a person has Covid they exhale the virus. This is the case whether they have symptoms or not – and up to half of people who are infected are asymptomatic.

If people get too close – having a long conversation face to face, for instance – they can directly breathe each other’s air, and transmission can occur that way.

But once in the air, the virus can remain suspended, floating around, like smoke. If outdoors, or in a well-ventilated space, it blows away pretty quickly.

But indoors, viral particles can build up, quickly filling a space. Some studies have found these clouds can travel 20ft or more. If other people are in that space, they breathe in the virus and become infected. 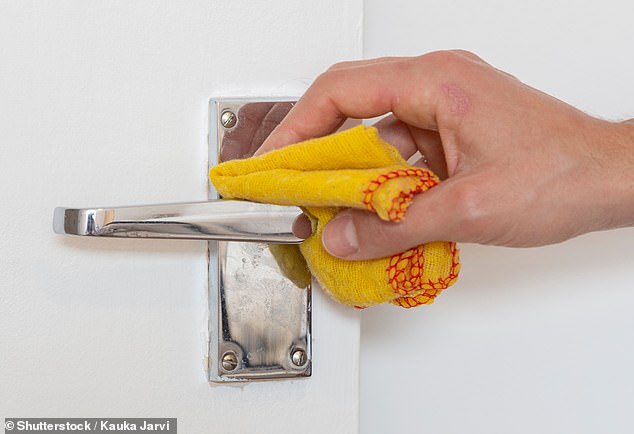 Almost all so-called superspreader events – outbreaks in which multiple people are infected at the same time – are believed to have occurred this way, according to numerous studies.

As a side point, this airborne model of transmission is why, if you’re in an office or other workplace that has installed plastic screens between desks, they are doing absolutely nothing to protect you. Not a thing.

It’s also why, as we revealed last week, social-distancing measures can be futile if you’re in a poorly ventilated space.

While catching Covid from surfaces or objects – collectively known in scientific terms as fomites – is theoretically plausible, it just doesn’t seem to happen.

Early studies looked at how long the virus survived on surfaces, with some suggesting that microbes could linger for up to six days. But these involved dolloping unrealistically large amounts of Covid-19 on to things in lab settings.

Recent research, in more real-life-like settings, suggests the virus doesn’t really survive on fomites for long, or at least not in any amount likely to cause infection.

Writing in The Lancet in August, New Jersey-based microbiologist Professor Emanuel Goldman said that while disinfecting surfaces and the use of gloves in hospital settings was ‘a reasonable precaution’, fomites in non-medical settings did not pose a risk.

He called for a ‘more balanced perspective’ to ‘curb excesses that become counterproductive’. 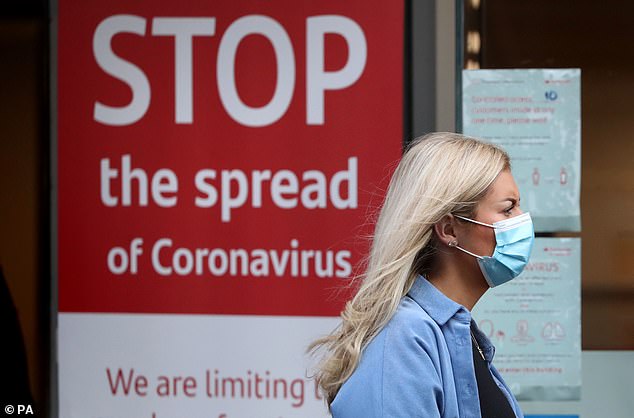 Mask-wearing is key: it can reduce how much virus is exhaled. But ventilation is also vital. Pictured: file photo of a person wearing a face mask in September last year

To translate, all this feverish cleaning of surfaces needs to stop. Part of the problem is that the UK’s authorities have been slow to pick up on all this.

The Government’s Health and Safety Executive, which advises businesses, still states, right at the top of its guidance: ‘Coronavirus can transfer from people to surfaces. It can be passed on to others who touch the same surfaces. Keeping your workplace clean… reduces the potential for coronavirus to spread and is a critical part of making and keeping your business Covid secure.’

Similarly, Public Health England states: ‘Surfaces and belongings can be contaminated with Covid-19 when people with the infection cough or sneeze or touch them. Increased frequency of cleaning of general room surfaces reduces the presence of the virus and the risk of contact.’

And as recently as January, the Prime Minister was warning: ‘This disease is not just passed on by standing too near someone in a supermarket queue, but also by handling something touched by an infected person.’

University of Leicester virologist Professor Julian Tang said it was clear to many experts early on that Covid was transmitted via shared air. He added: ‘We’ve been lobbying the World Health Organisation to recognise this for a year, but it’s like trying to change the direction of an elephant.’

He suggested there was a tendency among public health officials to downplay the risk of airborne transmission, at least partly due to the idea of invisible clouds of infectious particles being ‘scary’.

But last week, the US Centers for Disease Control (CDC) updated its advice, admitting airborne transmission was a far greater risk than it had previously stated. It admitted there was less than a one in 10,000 chance of catching Covid from a surface, and this could be mitigated by simple hand-washing. 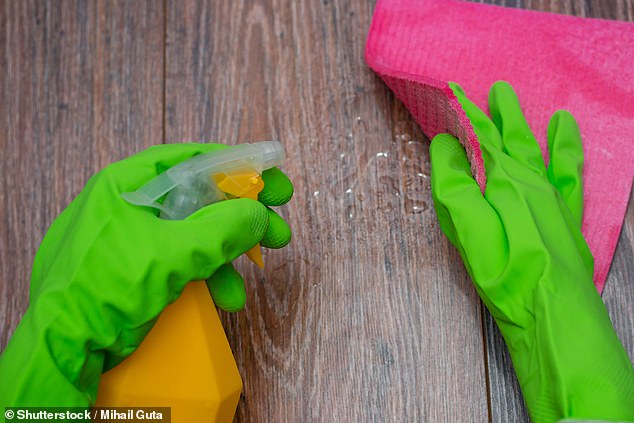 To translate, all this feverish cleaning of surfaces needs to stop. Part of the problem is that the UK’s authorities have been slow to pick up on all this (file photo)

Normal soapy water, rather than disinfectant, was enough to kill off any possible Covid on hands, or on a surface, should it actually be there. The CDC also warned there had been a spike in cases of poisoning and injuries since the start of the pandemic from wrongly used cleaning products.

And dermatologists I know all say they’re seeing a tsunami of new cases of hand eczema in people who appear to be using alcohol-based hand gel every five minutes when they’ve not even left the house.

Over the past few weeks, this newspaper has highlighted a number of Covid safety measure that were widely introduced at the start of the pandemic – but are now outdated.

Temperature checks were described by a number of leading scientists as ‘useless’ and ‘for show’ – the machines are not only inaccurate, but they’re proven to be unable to weed out Covid cases. And social-distancing measures, while well-meaning, fail to protect people from airborne transmission of the virus.

We’ve never said those who implement these things aren’t trying their best.

But sometimes, this isn’t the same as doing the best – and, if we are to successfully steer our way out of this pandemic, it will require a hand on the tiller at all times. As new evidence emerges, businesses must react.

So what else can be done that will keep us safe?

Mask-wearing is key: it can reduce how much virus is exhaled. But ventilation is also vital.

To its credit, the Health and Safety Executive does now require employers and business owners to open windows or install mechanical ventilation – fans and ducts that bring in fresh air from outside. 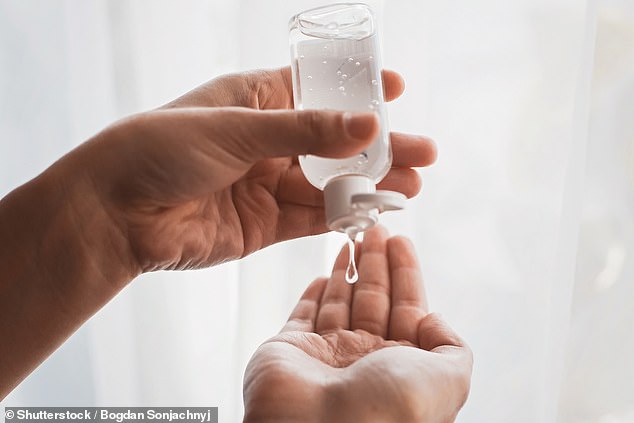 The problem is, many indoor spaces were not designed with maximising fresh air circulation in mind, which may pose a problem later this year as pubs and restaurants begin serving inside.

Public health expert Trish Greenhalgh has long been warning that the air, not surfaces, is the main risk with Covid. She said: ‘If you’re looking to catch Covid, the best place to be is indoors with the windows closed, with a lot of people and with some heavy breathing or singing going on.

‘If that sounds like your local pub, gym, band practice, board meeting, church, synagogue or playdate, and you don’t want to catch Covid, then shift out of doors as much as possible for as long as possible.

‘If you must meet indoors, wear well-fitting masks to catch the virus and keep the air clean. Third, open the windows.’

Prof Greenhalgh also suggest keeping tabs on airborne Covid infection risk with a carbon dioxide monitor. They don’t pick up the virus itself, but can indicate if the air quality is reaching stagnant, risky levels in which Covid could well be transmitting. ‘If the reading goes above 700, it’s time to open the window much wider or leave the room,’ she added.

Does washing everything actually do anything?

‘It might help people feel better,’ says Prof Tang. ‘But it won’t stop you getting Covid-19 if you’re sharing air with someone who’s infected.’