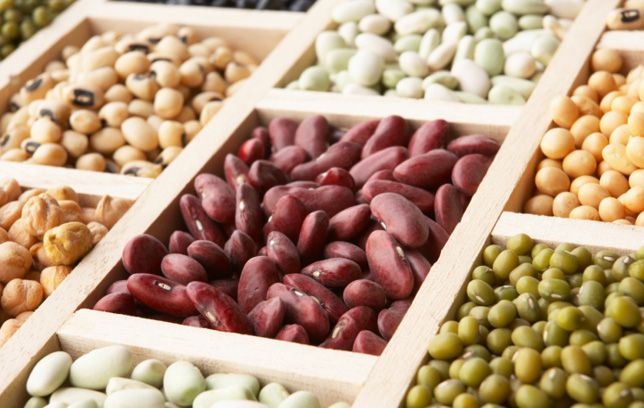 Beans tend to get a bad rap. If it’s not school kids associating them with farts, it’s health bloggers freaking out over the fact that beans contain phytic acid, a substance that is also found in grains, nuts, and legumes which is commonly labeled an “anti-nutrient.”

Naturally, the word “anti-nutrient” sounds terrifying. But it’s also seriously misleading. Here’s the truth about phytic acid — and why you don’t need to worry about it.

What is phytic acid?

Phytic acid is a substance found in nuts, edible seeds, and beans/legumes; it serves as the main storage form of phosphorous. It also binds to positively charged metals, which means it can attract the kinds of minerals that are crucial for nutrition, such as magnesium, iron, and zinc, thus impairing the absorption of these minerals in your digestive tract.

“Basically, if you chew your food and there’s some metal floating around and some phytic acid floating around, they may interact with each other,” says Trevor Kashey, Ph.D., an Ohio-based nutritionist and biochemist. “If they do, the phytic acid will bind the metal like a magnet, becoming phytate, and you might poop it out instead of absorbing it.”

For this reason, some health bloggers and Paleo thought leaders warn people to avoid eating things like nuts, beans, grains, and legumes, which are high in phytic acid. One of their most common arguments is that phytic acid binds with minerals that are vital for human health, thieving them in the night and leaving your bones brittle and your gut in turmoil.

Is phytic acid good or bad for you?

In fact, there are plenty of upsides to phytic acid that you won’t hear Paleo folks talk about. For starters, in addition to binding to iron and zinc, phytic acid also binds to not-so-great-for-you heavy metals like cadmium and lead, thus helping your body get rid of these metals. (This is more likely to be useful if you’re a smoker, since cigarettes contain toxic heavy metals.)

Additionally, phytic acid is also an antioxidant, and there’s some research to suggest that it can help protect against things like cancer, cardiovascular disease, and kidney stones, since it may bind to calcium and reduce urinary calcium levels. Phytic acid could even be the reason that whole grains are linked to a lower risk of colon cancer.

Basically, like anything else in life, phytic acid has both drawbacks and benefits. “There is this logic that everything on earth is…either good for us or bad for us, and it’s just not the case,” Kashey says. “Phytic acid isn’t really healthy or unhealthy for humans. It’s something that’s meant for plants and when it comes to the human diet, I think its incorporation is neutral. It’s not especially healthy, but it’s not especially harmful, either. It’s just something that helps plants store energy.”

How much phytic acid is safe to eat?

Phytic acid is neither a thieving boogeyman nor an undiscovered superfood. For most people, it’s basically a non-issue, says Kashey.

“Given the amounts of phytic acid present in food versus the amount of metals we get in food, it’s just not a factor if you have a balanced diet,” adds Kashey. “Food preparation and food variety make it a non issue for most everyone.”

Research has also found that adding Vitamin C completely “overcame the inhibitory effects of phytates,” plus it helps to improve iron absorption. One study found a sufficient dose to vanquish absorption issues was 30 milligrams — a third of the daily intake for men, which is basically the equivalent of less than half a cup of strawberries or broccoli.

Generally speaking, if phytic acid causes even a little concern, just be sure to eat fruits or veggies with your meals. (And you’re already doing that anyway, right?).