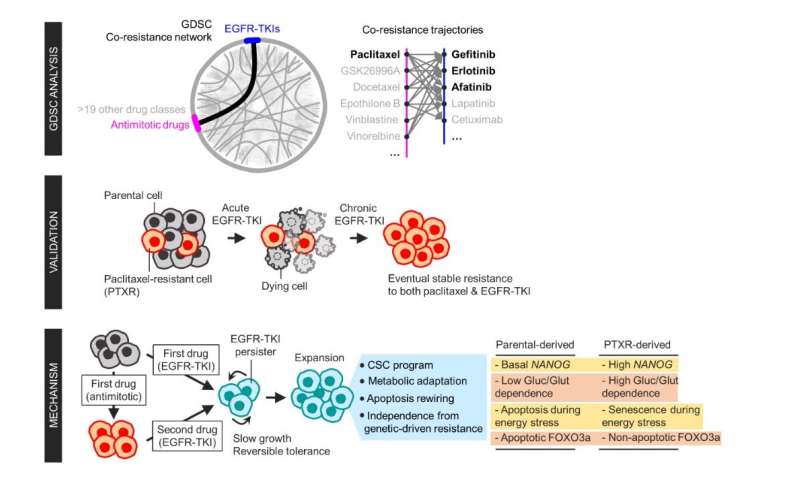 KAIST researchers have identified mechanisms that relay prior acquired resistance to the first-line chemotherapy to the second-line targeted therapy, fueling a “domino effect” in cancer drug resistance. Their study featured in the February 7 edition of Science Advances suggests a new strategy for improving the second-line setting of cancer treatment for patients who showed resistance to anti-cancer drugs.

A team of researchers led by Professor Yoosik Kim from the Department of Chemical and Biomolecular Engineering and the KAIST Institute for Health Science and Technology (KIHST) has discovered an unexpected resistance signature that occurs between chemotherapy and targeted therapy. The team further identified a set of integrated mechanisms that promotes this kind of sequential therapy resistance.

“There have been multiple clinical accounts reflecting that targeted therapies tend to be least successful in patients who have exhausted all standard treatments,” said the first author of the paper Mark Borris D. Aldonza. He continued, “These accounts ignited our hypothesis that failed responses to some chemotherapies might speed up the evolution of resistance to other drugs, particularly those with specific targets.” 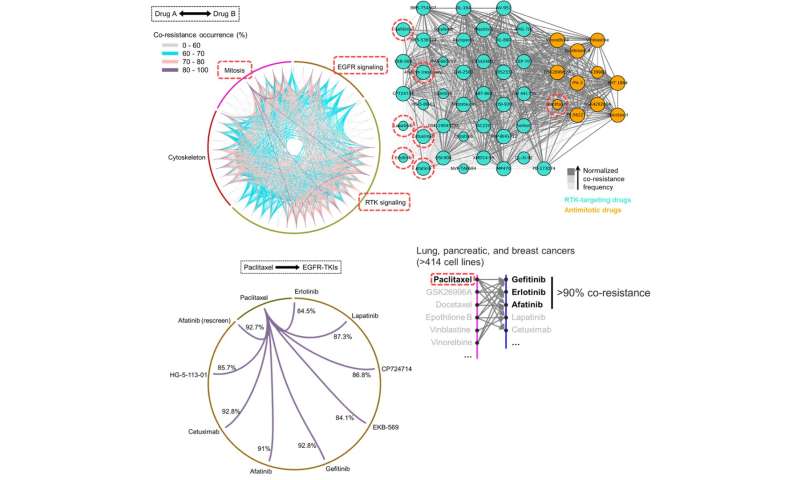 In all of the cancer types analyzed, more than 84 percent of those resistant to AMDs, representatively ‘paclitaxel,” were also resistant to at least nine EGFR-TKIs. In lung, pancreatic, and breast cancers where paclitaxel is often used as a first-line, standard-of-care regimen, greater than 92 percent showed resistance to EGFR-TKIs. Professor Kim said, “It is surprising to see that such collateral resistance can occur specifically between two chemically different classes of drugs.”

To figure out how failed responses to paclitaxel leads to resistance to EGFR-TKIs, the team validated co-resistance signatures that they found in the database by generating and analyzing a subset of slow-doubling, paclitaxel-resistant cancer models called ‘persisters.”

The results demonstrated that paclitaxel-resistant cancers remodel their stress response by first becoming more stem cell-like, evolving the ability to self-renew to adapt to more stressful conditions like drug exposures. More surprisingly, when the researchers characterized the metabolic state of the cells, EGFR-TKI persisters derived from paclitaxel-resistant cancer cells showed high dependencies to energy-producing processes such as glycolysis and glutaminolysis.

“We found that, without an energy stimulus like glucose, these cells transform to becoming more senescent, a characteristic of cells that have arrested cell division. However, this senescence is controlled by stem cell factors, which the paclitaxel-resistant cancers use to escape from this arrested state given a favorable condition to re-grow,” said Aldonza.

Professor Kim explained, “Before this research, there was no reason to expect that acquiring the cancer stem cell phenotype that dramatically leads to a cascade of changes in cellular states affecting metabolism and cell death is linked with drug-specific sequential resistance between two classes of therapies.”

Bowel cancer symptoms: What shape are your stools? Sign of the deadly disease

Bowel cancer symptoms: What shape are your stools? Sign of the deadly disease

Coronavirus: inflammations of the heart muscle by COVID-19 favored Naturopathy naturopathy specialist portal
We and our partners use cookies on this site to improve our service, perform analytics, personalize advertising, measure advertising performance, and remember website preferences.Ok