Given that up to half of foodborne illnesses may come from the home kitchen, understanding food safety practices, and how to prevent this kind of sickness, is absolutely vital.

But while we all may say that we’re being safe and healthy, and know about good practices for preparing food at home, the truth is that we might be doing things that have the potential to make us ill when we eat.

For our latest study, we wanted to find out just where people are going wrong. But rather than conduct a survey, we decided to use the most reliable method of finding out what people are doing in the kitchen – watching them in action.

At Cardiff Metropolitan’s ZERO2FIVE Food Industry Centre, we have a fully fitted unit which is much like a home kitchen, except with CCTV cameras to observe behaviour. We wanted to explore the food safety practices of older adults in particular, so we invited 100 people over the age of 60 to prepare a meal for themselves in the unit.

Older adults are associated with increased incidence of foodborne illness, due to reduced immune function, so food safety practices at home are particularly important for them. However, researchers have found that those over 60 have insufficient knowledge, and negative attitudes towards food safety, which may contribute to the implementation of unsafe food handling practices.

But data on older adults’ actual food safety behaviours are lacking. Though there have been several studies, I have found that less than a third of consumer food safety research covering all age groups – the majority of which were conducted in home kitchens – determine actual behaviour. In home kitchens, certain variables (such as baseline microbial levels) can’t be controlled, making comparisons between individuals problematic. In addition, a researcher’s presence can make participants behave differently, as they change their behaviour in response to being watched. 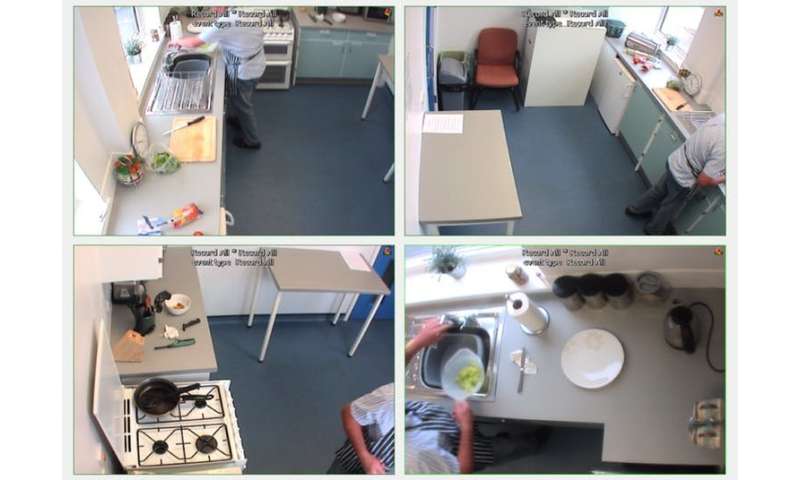 In addition to recording our participants’ behaviour, after they were finished in the kitchen we took swabs of surfaces and equipment to determine contamination. Linking the observed practices with microbiological analysis meant that we could identify suspected routes of contamination, as well as see where they were initially going wrong.

Currently, only 3% of consumer food safety studies are conducted in observation kitchens like ours, and no others have used microbial swabs to find potential routes of cross-contamination among an at risk group of consumers.

Using the kitchen and swabs, we found that the older adults frequently implemented potentially unsafe food handling practices. For example, less than a third (30%) adequately washed and dried their hands before starting food preparation. Nearly half (47%) failed to use soap during one or more hand washing attempts. And a staggering 90% failed to adequately wash and dry their hands immediately after handling raw chicken. But we also found that those who implemented more adequate hand cleaning had significantly lower levels of microbiological contamination across the kitchen.

Looking at the tools used to prepare food, 10% of the participants failed to clean or use a separate chopping board and knife for raw chicken and ready-to-eat food, such as salad vegetables or ready-to-eat sliced cooked ham. On one or more occasion, 91% of participants implemented inadequate washing and drying of chopping boards.

As for the food itself, 20% of the participants were seen washing raw chicken breast meat in the sink before preparation and cooking. Despite common awareness, this practice only increases the risk of cross-contamination.