To a young Allison King, Washington University School of Medicine served as one of the best playgrounds in St. Louis.

As a preschooler, she hid underneath benches in the renal lab where her mother worked. In grade school, she spent summer days creating red, yellow and blue plastic tube people from a waxy laboratory staple used to seal flasks and other containers. As she got older, she helped exercise the lab rats to see if movement improved kidney function (it did). She even had a favorite rat, Picasso, named because the rodent’s partially eaten food resembled the artist’s sculptures.

“I grew up at Washington University,” said King, MD, PhD, now an associate professor of occupational therapy, of pediatrics and of medicine, and a leading national expert on sickle cell disease in children and young adults. “My mom worked in a renal lab since before I was born. I’d spend many summer days on campus, making myself busy and having fun.”

Her life always has revolved around Washington University. Not only does King work on the Medical Campus, she can see the impressive Danforth Campus from her kitchen window in a house she shares with her 7-year-old twins and her husband, John F. DiPersio, MD, PhD, the Virginia E. and Sam J. Golman Professor of Medicine in Oncology and deputy director of Siteman Cancer Center at Barnes-Jewish Hospital and Washington University School of Medicine.

King contributes to the university’s impressiveness through her nationally recognized research in sickle cell disease, as well as the protocols she has helped implement to improve clinical care for the incurable disease, which affects 100,000 people in the U.S., primarily African-Americans.

Last year, King received a six-year, $4.3 million grant from the National Institutes of Health (NIH) to help improve health care for teens and adults with sickle cell disease. The condition encompasses a group of inherited red blood cell disorders resulting from abnormal hemoglobin, a protein that delivers oxygen in the body. The disease causes typically round red blood cells to become crescent-shaped, or sickled, and leads to chronic pain and fatigue, organ damage and shortened life spans.

The funding — part of a larger effort spearheaded by the National Heart, Lung, and Blood Institute (NHLBI) of the NIH — is the first of its kind focused on young adult patients.

“Research on teens and adults with sickle cell disease is limited,” said King, who also is an associate professor of surgery and a medical director of survivorship at Siteman Cancer Center. “Transitioning patients from pediatric to adult health care is one of the most challenging barriers to overcome with this disease.”

Gary A. Silverman, MD, PhD, the Harriet B. Spoehrer Professor and head of the Department of Pediatrics, said King is “one of the foremost experts in sickle cell research. She has helped to distinguish Washington University nationally as a leader in the field.” 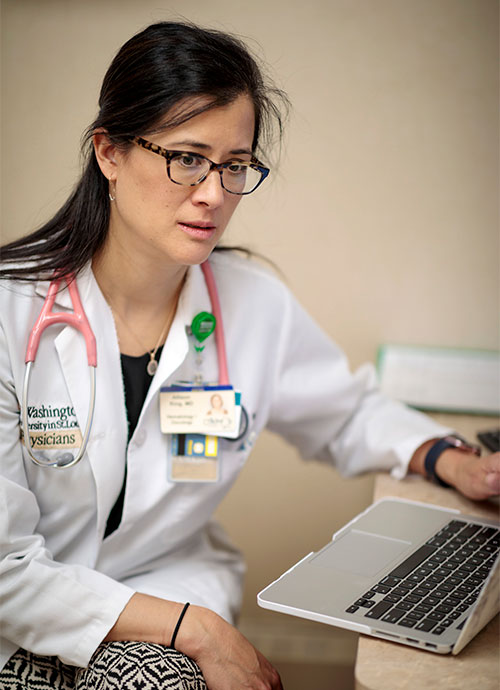 How did you become interested in sickle cell research?

I didn’t originally plan to specialize in sickle cell. When I was a senior in high school, my dad had a massive stroke. He lived for another year and a half, but through the experience, I was exposed to rehabilitation medicine and neurology. I thought that was what I would do. I wanted to help people learn to walk again. But when I was in medical school, I found the pace too slow. Then as an intern, during one of my first weekends on call, I helped care for a boy who had a severe headache and was later found to have a stroke. He was in grade school, and he had sickle cell disease. I helped arrange for his imaging and preparing for a blood transfusion. It was more fast-paced and encompassed many aspects of medicine, from hematology to neurology to epidemiology and therapy services.

How has care for patients with sickle cell disease changed over the years?

Overall patient care has improved dramatically in the last couple decades. That’s partly because parents and kids are more educated about the disease and undergo more health screenings. Also, there has been an uptick in hydroxyurea prescriptions, a medicine that helps to decrease patients’ pain, reduces the need for blood transfusions and helps prevent organ damage. It has increased life spans, allowing some people to live into their 60s. Before, many patients died in their 20s.

Why is it difficult for sickle cell patients to transition from pediatric care to adult care?

We classify patients as adolescent up to age 26. This is an age group that does not want to be defined by a chronic disease; we see this a lot in both sickle cell and leukemia patients. Anything related to their condition may be off-putting. Many are less concerned about taking maintenance medications, and hydroxyurea, for example, needs to be taken every day. A lot of what we do in our clinic is teaching skills for autonomy and educating patients about their disease. We explain the medications and how they work, and we help devise a schedule for taking them. I help program their smartphones so they have daily reminders to take their meds, and I enter doctor appointments in their calendars. By focusing on adolescents, we have the luxury of having more time to help build these important skills.

There’s also a different attitude among health-care workers who work with this age group. We understand where these patients are in terms of brain development. If a patient says out of frustration, “OK, I’ll just go home,” we work through it. Whereas in a busy adult clinic, the patient may get discharged for threatening to leave.

What are other challenges facing young adults with sickle cell disease?

Cognitive deficits are very common. This is what I’m really focused on. Many of these patients suffer silent strokes, resulting in brain damage. However, even those who have not had a stroke often have cognitive issues. Such challenges include the inability to multitask, plan and organize. Many lack sound judgment and follow-through, and they experience delayed brain-processing speeds and poor memory. In a health clinic for adults, you go through a litany of questions, get prescriptions and leave. The quick pace would be too much for many young patients to comprehend. They need more time and extra support. We know this. We understand that patients are not bad people if they neglect their complicated medication regimens; they sometimes have cognitive challenges. It gets even more complex when patients have other conditions such as asthma. And many of these patients live at or near poverty levels. They may be hungry or unable to find transportation to go to doctor appointments. Some health-care providers don’t see the big picture. It’s a complex and very interesting disease to study, but it’s also very sad.

What else does your research entail?

Part of my research involves working with schools to get educators to recognize the cognitive deficits. Sickle cell is such a rare disease that many schools have only a couple of kids who have it and, therefore, school administrators and teachers don’t know much about it. The disease is like an invisible disability. We work with the schools to implement federally mandated plans that provide extra support. It might be allowing kids to go to the bathroom frequently without teachers raising their eyebrows; with this disease, you drink more, so you urinate more. We also address behavior. Sometimes schools don’t understand when children with sickle cell start acting out. It’s not because they’re being jerks; their inhibition and judgment are affected. Similarly, parents may get frustrated if, for instance, they notice children playing video games incessantly. Parents might think that if their kids feel good enough to play games, they’re fine. But often, the kids play nonstop because they’re in so much pain and need a distraction. Sadly, when they get older, the behavioral consequences sometimes become more severe. Now that I’ve started to see my patients grow into young adults, I see it firsthand. I have a handful of adult patients who have brain damage from strokes, and they’ve been in jail. There are people around them who recognize that they sometimes lack the ability to say no to a bad situation and, as a result, they end up being accessories in illegal situations.

Part of our grant money also goes toward establishing evidence-based care in hospitals. We’re working at a systems and an individual level to change practice — for example, improving emergency room care. A standard order for treating sickle cell patients means they can be fast-tracked so they spend less time waiting and get the medicine they urgently need. It’s not rocket science, but it involves a lot of planning and collaboration.

Were your parents in the medical field?

My father was in sales. My mother got her master’s degree in biology and a teaching certificate from Stanford University. She could’ve gone to medical school or earned a doctoral degree. But she was the daughter of Chinese immigrants, and the thought of taking out loans was too stressful for her family. Instead, she taught high school biology. She then worked for 33 years in the university’s renal division, running tests that investigators needed to do research. I remember walking with her to the dialysis center and picking up patient samples. I’d come with her to the lab when she didn’t have child care. I always found things to do.

Any other memories from your mom’s lab?

Macho the Rooster. He’s a 17-pound rooster, stuffed and preserved in a Plexiglas case and still on display in a campus lab. He helped Eduardo Slatopolsky, MD, a professor emeritus in the Division of Nephrology, develop an antibody that enabled researchers to measure levels of parathyroid hormone (PTH) in humans. It improved treatment of bone disease in patients with chronic kidney disease and contributed to research on the effects of PTH on other organs. Anyone who has worked in the renal division likely remembers Macho the Rooster.

Can you tell us about your family life?

John (DiPersio) and I met while I was doing a rotation in the adult bone marrow transplant unit at Barnes-Jewish Hospital. We connected over a yellow Labrador puppy named Max. John traveled a lot and didn’t want to leave Max at a kennel so I offered to take care of the dog. We became good friends and married in 2005. Unfortunately, Max died about three years ago. We have a new dog, Sulley, another male yellow Labrador. Sulley is named after James P. Sullivan, the monster from Disney’s Monsters Inc. More importantly, we have twins, Isabella and Jack. Izzy wants to be a veterinarian, and Jack wants to build limbs for people who lost theirs to cancer. Most of my time away from work is spent with the kids at soccer games, visiting Grant’s Farm because Izzy likes horses or eating bar food at Blueberry Hill. The fun thing is that our kids will sometimes come with us to work. Washington University is like their second home.