Revealed: Just a QUARTER of GP appointments are face-to-face AND with a qualified doctor

Just a quarter of GP appointments in England are face-to-face and with an actual doctor, MailOnline can reveal.

Critics have warned general practice is heading down a ‘slippery slope’ where nurses and other staff are picking up the burden amid crippling staffing shortages.

An NHS source told MailOnline that of the 27.5million GP appointments carried out across England in May, just 27 per cent were both in-person and with a qualified doctor.

That figure is not routinely published but publicly-available data shows 64 per cent of total GP appointments were face-to-face and roughly half were with a real GP. The rest were a mixture of virtual or telephone consultations and appointments led by practice nurses, physiotherapists and even acupuncturists.

Despite the Government’s push to go back to normal, the country’s top family doctor yesterday said the current level of face-to-face appointments was ‘probably about right’. Professor Martin Marshall, chair of the Royal College of GPs, told a conference in London that going back to pre-pandemic levels of more than 80 per cent ‘just doesn’t make sense for patients’. 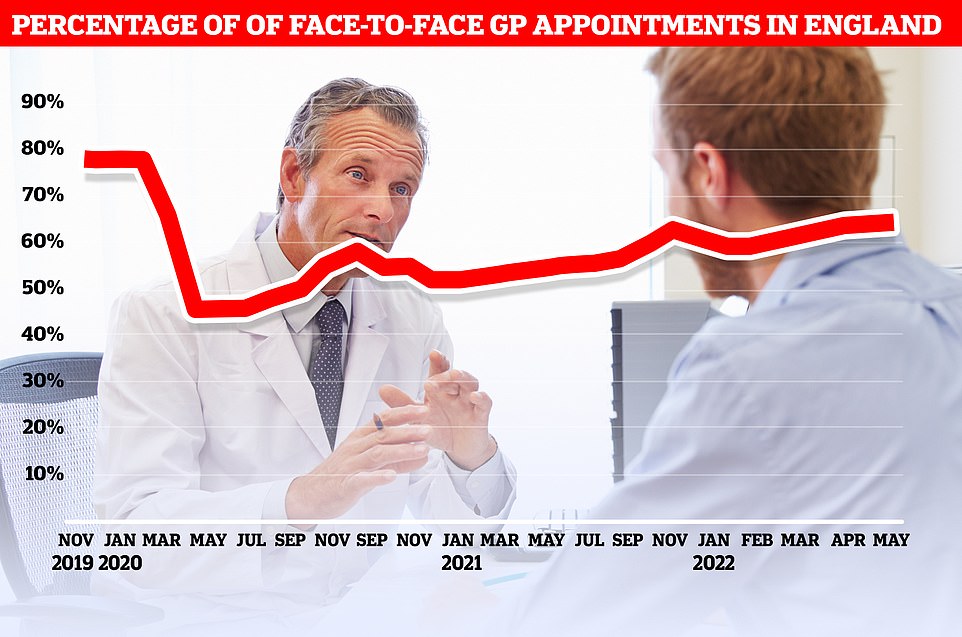 NHS England data shows 64 per cent of total GP appointments were face-to-face in May. The figure is the second-highest since the height of the first Covid wave forced the majority of appointments to be held virtually. But it is still well below pre-pandemic levels, when eight in 10 appointments took place in-person. 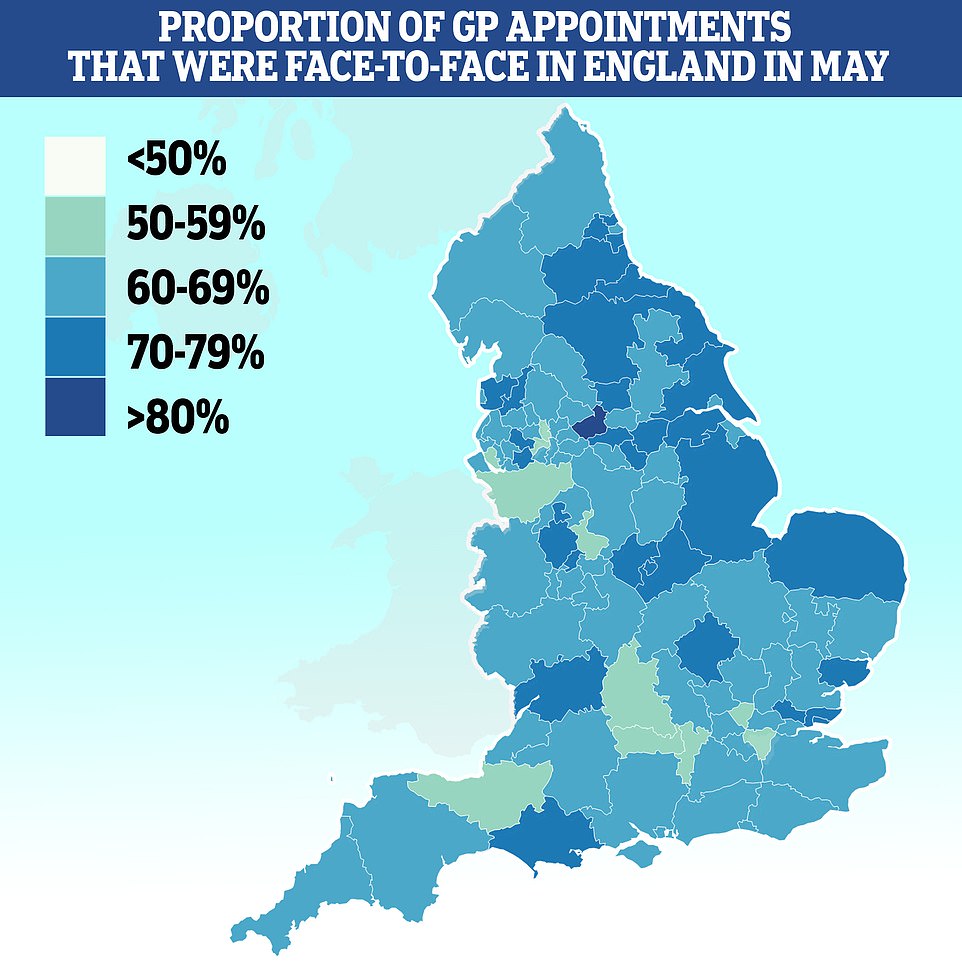 Only half of NHS patients regularly get to see the same GP — even though it’s better for their health, it emerged today.

Queen Mary University of London experts looked at appointments given to 1million adults registered at 126 GP practices in east London.

Dr Sally Hull, the study’s author, said: ‘Continuity of care leads to better outcomes, particularly for elderly patients and those with complex needs.

‘It should be measured routinely as a marker of practice quality.’

It comes as the UK’s top GP today warned dropping levels of continuity of care pose an ‘existential threat’ to patient safety.

Professor Martin Marshall, chair of the Royal College of GPs, told a GP conference in London that trusted relationships between family doctors and patients are the most ‘powerful intervention’ for delivering better care.

This included nearly 1.2million that were listed as ‘did not attend’.

Half of appointments — 13.8million — were with GPs and 12.8million (46.6 per cent) were with nurses or other members of staff, which could include acupuncturists, chiropodists or even counsellors in some cases.

The type of healthcare staff was not logged for 878,374 appointments.

Practice nurses have many of the same powers as GPs as they can examine and diagnose patients, as well as provide treatment, prescriptions and referrals.

The figure is the second highest since the pandemic took off in spring 2020.

But it is still well below pre-pandemic levels, when eight in 10 appointments took place in-person.

A third of appointments in May were phone calls, while 0.5 per cent took place via video or online.

An NHS source admitted that even though face-to-face appointments are recovering, just 42 per cent of all in-person consults were with actual GPs.

Mr Reed warned GPs are now the last point of contact rather than the first and warned the NHS is heading down a ‘slippery slope’.

The trend ‘seems to be due to the shortage of GPs’ and has become ‘necessary in so many practices’ to manage demand, Mr Reed said.

He added that the Government has ‘gone completely quiet’ on the issue because they know that the number of GPs are the ‘root of the problem’.

Ministers had promised to hire 6,000 new GPs by 2024 but have since admitted they will likely fail, breaking a key manifesto pledge.

But Professor Marshall yesterday told the Royal College of General Practitioners (RCGP) annual conference in London that just two-thirds of appointments being in-person would probably be the new normal.

The RCGP chair said: ‘The argument about face to face against remote have been really frustrating, it has to be said. What we’ve seen in a transition.

‘Pre-pandemic, around about 80 per cent of consultations were conducted face-to-face. At the height of the first wave that dropped down to 10 per cent and now it’s back to pretty much stable at 64 per cent.

‘A higher proportion of face-to-face consultations are carried out by members of the primary care team other than doctors, nurses obviously doing examinations, procedures, whatever. 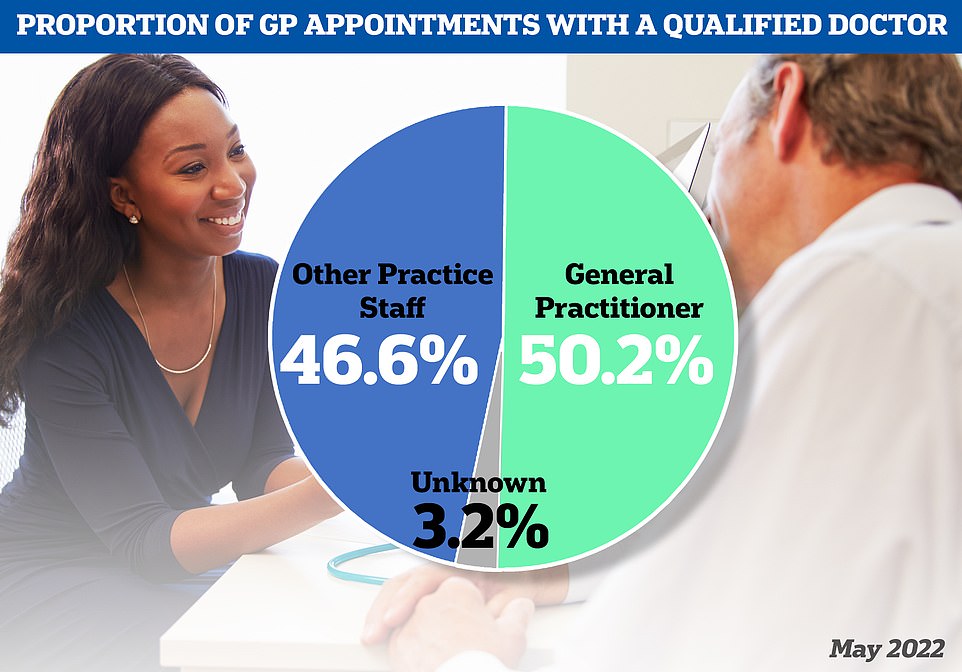 End of the family GP? A quarter of doctor and nurse posts could be vacant by 2030, report warns

More than a quarter of doctor and nurse posts in GP practices could be vacant within ten years, a damning report is warning today.

The NHS in England is facing a ‘crippling shortage’ that poses a risk to patient care, the Health Foundation think-tank says.

Patients are struggling to secure appointments amid a shortage of 4,200 full-time equivalent GPs and 1,700 general practice nurses.

But the think-tank’s projections show these figures are set to get ‘substantially worse’ over the coming decade.

It estimates GP shortages could climb to 10,700 full-time equivalents by 2030/31 on current trends, relative to the number needed to meet the rising need for care.

However, if a growing number of GPs quit due to burnout, the projected shortfall could increase even further to 20,400, leaving around half of posts vacant in 2030/31.

Worryingly, even in an optimistic scenario there could still be a shortfall of GPs and general practice nurses in the decade ahead, the report concludes.

‘But generally it feels to me if you look across the country, 64 per cent is probably about right.

‘We’ve learnt from the pandemic that we can do more in general practice for the convenience of patients remotely than we ever thought was possible.

‘So the idea that we should go back to 80 per cent of consultations face to face just doesn’t make sense for patients.’

Professor Marshall said GPs have got better at making decisions about when in-person appointments are necessary and when they are not over the last two-and-a-half years and patients have ‘got used to it’.

‘So we’ve just been through a learning exercise and it feels to me like we’re stable now,’ he added

It comes after the Health Foundation warned the GP crisis is going to get ‘substantially worse’ over the next 10 years, with thousands expected to quit or scale back their hours.

The think tank estimated family doctor shortages could climb to 10,700 full-time equivalents by 2031, based on current trends, in relation to the number needed to meet the rising care need.

A separate survey earlier this year revealed that patient satisfaction with their GP surgery has plummeted to its lowest ever level, fuelled by the appointments crisis.

A quarter of consultations are taking five minutes or less in some parts of the country. Doctors say squeezing in so many appointments raises the risk of missing diseases and prescribing the wrong drugs.

In order to make it easier for millions of patients to be seen, GPs have been told to start offering weekday evening and weekend consultations from October.

But family doctors, who pocket an average of £100,000 per year, have threatened industrial action over the NHS contract because they feel overwhelmed and fear the move will spread them even thinner.

Overall, there are now nearly 1,700 fewer full-time equivalent GPs than in 2015.

Many are retiring in their 50s, moving abroad or leaving to work in the private sector because of soaring demand and paperwork.

The row over current levels of face-to-face appointments, in particular, has also been named as one factor for GPs quitting.