Vaccine coverage falls for ALL 13 childhood jabs in England in a year despite measles warnings and Government drive to beat anti-vaxxers, ‘unacceptable’ NHS figures show

The proportion of children getting vaccinated on time dropped for all 13 jabs in England last year.

Fewer families are managing to get their children immunised against deadly diseases such as measles, polio, tetanus and meningitis than in 2017-18.

Vaccination rates have fallen despite Government threats to stop children starting school if they’re not protected and an attempt to crack down on anti-vaxx theories spreading.

Measles cases around the world have soared this year and, although the effects on the UK haven’t been as bad, there are concerns people are getting complacent.

The Government’s Health Secretary, Matt Hancock, said the drop was ‘unacceptable’ and that he wouldn’t rule out sending children home from school. 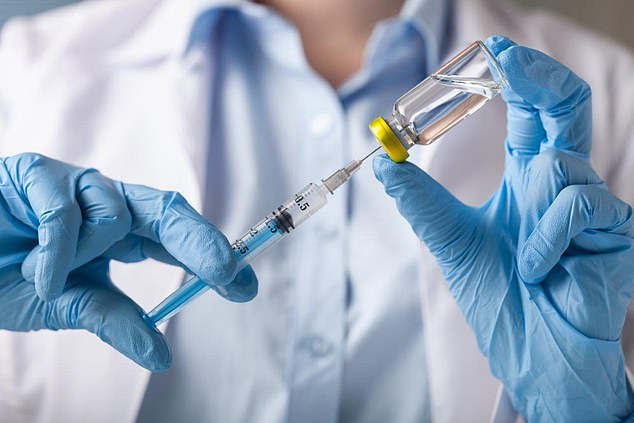 The proportion of parents in England making sure their children get vaccinated on time is falling, according to NHS statistics (stock image)

The damning statistics were released by NHS Digital earlier today and show more work needs to be done to improve how many children get vaccinated before starting school.

For individual jabs, the decreases from last year ranged from drops of 0.2 to 1 per cent.

The worst change was for the DTap-IPV-Hib among one-year-olds, which dropped by one percentage point to 92.1 per cent – its lowest level since 2008-09.

The smallest fall was for the Hib/Meningitis C protection among five-year-olds, which dropped 0.2 per cent from 92.4 to 92.2.

Coverage for the a single dose of the measles, mumps and rubella (MMR) vaccine by the age of five is 94.5 per cent, down from 94.9 per cent in 2017-18 and below the 95 per cent target set by the World Health Organization.

To give full protection, however, children should have two doses of MMR by the time they’re five, and only 86.4 per cent of children had received this last year.

Health Secretary Matt Hancock said: ‘Falling childhood vaccination rates are unacceptable. Everyone has a role to play in halting this decline.

‘The loss of our measles-free status is a stark reminder that devastating diseases can, and will, resurface.

‘We need to be bold and I will not rule out action so that every child is properly protected.’

The vaccines covered by the figures include the DTap-IPV-Hib, also known as the six-in-one, which protects against diphtheria, tetanus, whooping cough, polio, Haemophilus influenzae type b (Hib) and and hepatitis B.

Children also get the PCV vaccine, to protect against a pneumonia-causing bacteria; the Rotavirus vaccine; the MMR vaccine and one for meningitis C.

Most require more than one dose before the child turns five in order for them to be fully effective. Coverage rates for second doses tend to be significantly lower than for firsts.

The NHS’s figures gave a geographical breakdown of the country and showed all of the 20 boroughs with the worst MMR coverage were in London.

Westminster fared worst, with just 64.1 per cent of youngsters being given both doses of the MMR jab by their fifth birthday.

At the other end of the scale was County Durham, where the rate of five-year-olds having both MMR doses was 96.4 per cent. The rate for England was 86.4 per cent.

The NHS’s medical director for England, Professor Stephen Powis, said: ‘Vaccines are a vital, life-saving part of our country’s public health and the numbers of children not being vaccinated is concerning.

‘No one should be complacent about getting their own or their child’s jabs and so the NHS is taking action, with its partners, to combat the decline and to reverse the dangerous effects of complacency about vaccines.’

Public Health England’s head of immunisation, Dr Mary Ramsay, added: ‘Although these changes are small proportions, these are big drops in terms of public health.

‘The trend is a concerning continuation of what we’ve seen in the last five years.

‘No parent should be in any doubt of the devastating impact of these diseases. It’s vital that everyone recognises the value of vaccines and takes up this life-saving offer.’

She said in November: ‘Over 30 years, we have vaccinated millions of children. It is a safe vaccination, we know that, and we’ve saved millions of lives across the world.

‘People who spread these myths, when children die they will not be there to pick up the pieces or the blame.’

One myth is based on research done by Andrew Wakefield in the 1990s which claimed MMR led to autism, but his results were later found to be fake, and the work was called ‘fatally flawed’, ‘fraudulent’ and ‘dishonest’ by experts in the field.

Others claim the vaccine doesn’t work – but after the introduction of MMR in 1963, global measles deaths dropped, on average, from 2.6million to around 100,000, according to the WHO.

The figure has fluctuated since, believed to be partly due to the Wakefield scare in the mid-90s, but in 2017 there were reports of only 1,693 measles cases in England.