A pair of twins in Germany are thriving after becoming the first to get a drug treatment for a genetic disorder while still in the womb.

Corrina’s first son, Joshua, has very few teeth and insufficient sweat glands, meaning he could easily overheat and even die if his body temperature rises too high due to a genetic disorder called X-linked hypohidrotic ectodermal dysplasia.

When she became pregnant with twin boys, Corrina wondered if the same fate was inescapable for them.

After finding out Joshua’s diagnosis when he was two, Corrina got touch with Dr Holm Schneider, who researches the disorder.

Dr Schneider had had remarkable success treating developing animal fetuses for the disorder while they were in the womb, but had never tried to treat a human – let alone twins. 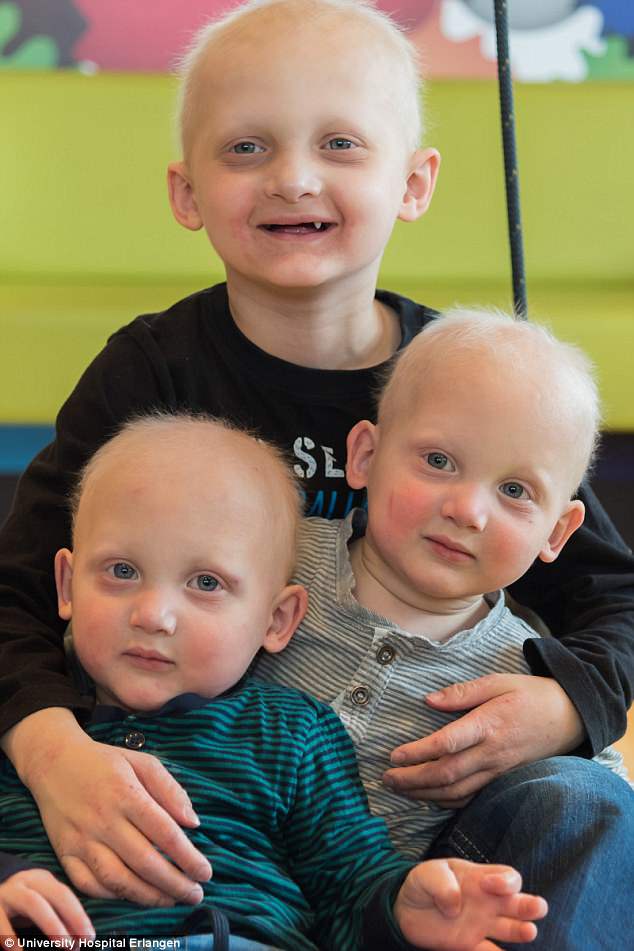 Twins Linus (bottom left) and Maarten (bottom right) were the first babies to receive a drug treatment in the womb for the rare genetic disorder that their brother, Joshua (center) suffers

Corrina decided to take the plunge.

Her boys, Maarten and Linus became the first to get the in utero treatment and now, at the same age their brother was when he was diagnosed, the first-of-its kind procedure seems to have worked.

For most parents, a sweaty car seat on a hot summer day would hardly be noteworthy, except perhaps something as something that would need to be cleaned.

But for Corrina and her husband, Tobias, ‘when we discovered wet baby car seats in the first summer, we became really excited about the effect of the treatment,’ she told CNN.

Maarten and Linus look very similar to their older brother – all three boys have sparse hair so blonde it is nearly white and slight dark shadows under their blue eyes.

But the two-year-old twins have a protein that Joshua lacks, thanks to the experimental new treatment.

People born with X-linked hypohidrotic ectodermal dysplasia (HED) inherit a faulty gene from the X-chromosome that leaves them with an dysfunctional protein contains instructions for the formation particular types of tissues during development in the womb. 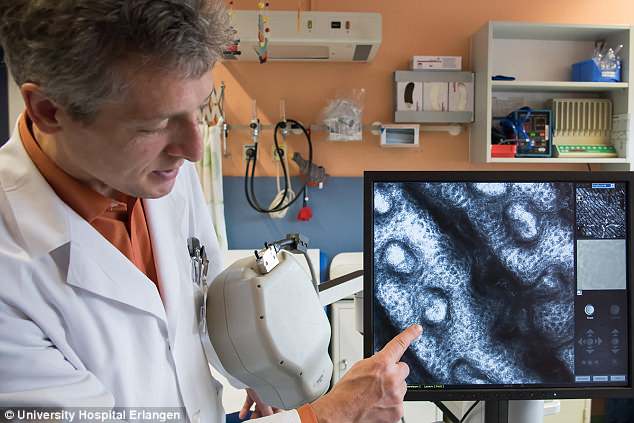 Under a microscope, Dr Schneider (left) can see that healthy sweat glands have developed in the Linus’s and Maarten’s skin (right) 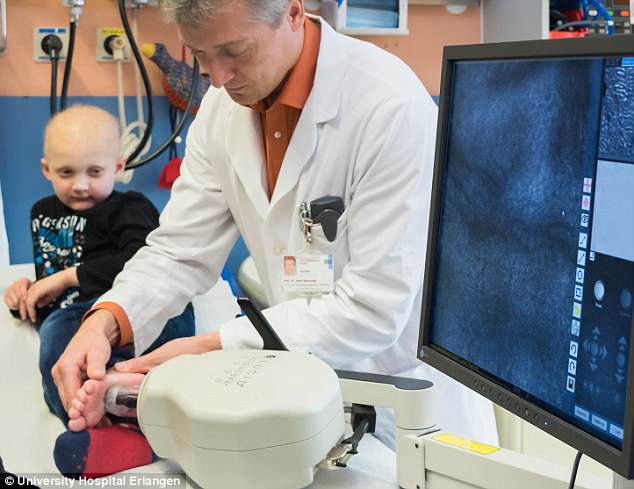 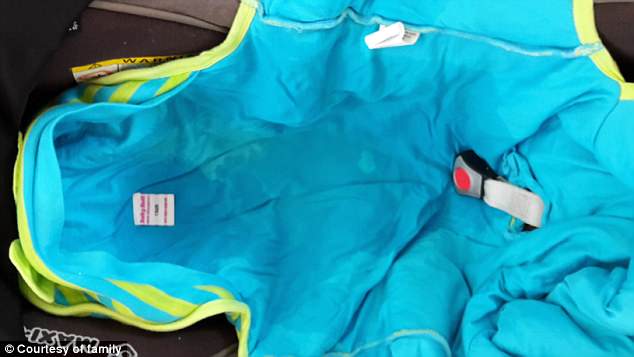 Sweat glands develop between the 20th and 30th weeks of pregnancy. Once fully formed, the sweat they secrete are crucial to the body’s ability to regulate temperature.

The protein is also involved in the formation of teeth. Because of his HED, Joshua, now five, has only a few small, pointy teeth.

There are not really any treatments for people with HED, who the NIH simply recommends should take measures to be sure to stay cool, get dentures and artificial tears.

Dr Schneider had been experimenting with injecting a substitute for the protein into the amniotic fluid surrounding animal fetuses.

In mice that got the injections, the drug overrided the genetic mutation, and their development proceeded normally, giving the baby mice the ability to sweat normally.

More and more doctors are experimenting wutg in utero procedures but no one has  tried to administer a drug therapy to undo the effects of a genetic mutation to a fetus before.

Two injections were delivered to the developing twins, at 26 weeks and 31 weeks into Corrina’s pregnancy. Because the window of development for the tissues affected by HED is so short, timing the treatments correctly was imperative. 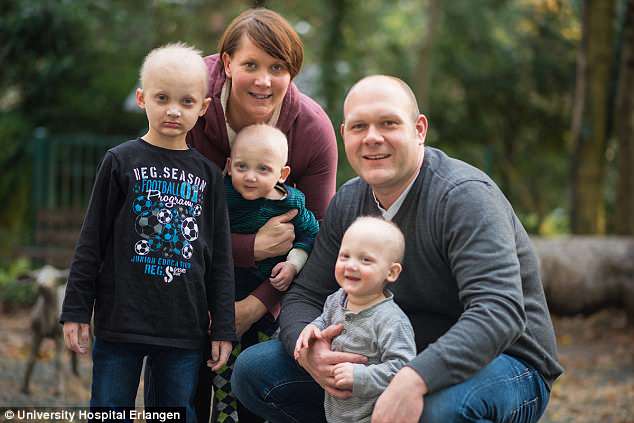 Joshua, Corrina, Maarten, Linus and Tobias (from left to right) can enjoy the outdoors together without worrying so much about the twins, who are too young to say if they are overheated

From there, Corrina, Tobias and Dr Schneider simply had to wait.

Maarten and Linus were born six weeks early, which is a risk of a pregnancy with twins.

There is no way to know if their injections had anything to do with the boys’ early births, though one other baby has since been born after having the treatment and his mother carried him to full term.

But Corrina’s newborn sons were healthy – and they were even able to sweat, tests revealed.

‘They can run as they like to do and can enjoy the sun … as everybody else without overheating,’ Dr Schneider told CNN.

Though at two, Maarten and Linus wouldn’t be expected to have all their teeth any way, they have far more precursors of teeth than their brother did at their age.

Maarten and Linus became the first human babies treated successfully for a genetic disorder in the womb, and Dr Schneider and his team published their work in the New England Journal of Medicine in April.

Dr Schneider is the first to make deliver such a treatment, but many speculate these methods will be key to the future of medicine.

Scientists are working on treatments for other genetic disorders – most notably hemophilia – that could change the lives of the six percent of babies born with such conditions.