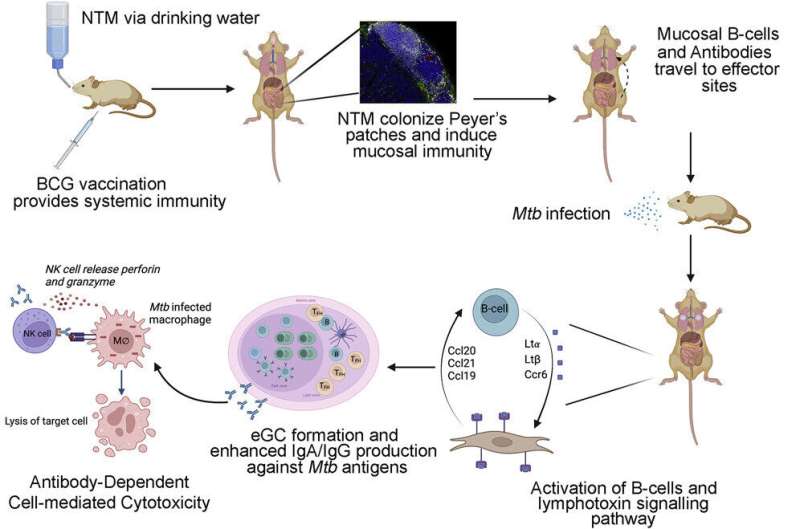 Tuberculosis is an infectious disease of the lungs that’s been with humanity for centuries and affects a quarter of the world’s population. The stubborn disease killed over a million and a half people in 2021, mostly in lower- and middle- income countries where access to basic resources is scarce.

Researchers at Colorado State University are among the foremost experts on Mycobacterium tuberculosis, the causative agent of the disease, and have for many years been dedicated to understanding its underlying immunopathology as well as finding new ways to prevent or treat it.

Now, CSU researchers have uncovered an intriguing link between the efficacy of the world’s only licensed tuberculosis vaccine, and the environmental pathogens that people all over the world live with every day.

The most widely used vaccine against Mycobacterium tuberculosis, called Bacille Calmette-Guerin (BCG), is administered regularly in parts of the world where the disease is a common threat, but its efficacy is spotty and wanes over time. People who live in lower- and middle-income countries also tend to experience higher rates of exposure to other pathogens of the same family Mycobacteria. These related, environmental pathogens, found in air, soil and water, are called non-tuberculous mycobacteria.

The CSU team led by Monfort Professor Marcela Henao-Tamayo, associate professor in the Department of Microbiology, Immunology, and Pathology, has been seeking to understand the relationship between prolonged exposure to non-tuberculous mycobacteria and how well the current BCG vaccine protects against the disease. Previously, scientists thought one reason the vaccine does not protect well is due to this constant exposure to environmental mycobacteria.

The CSU team developed a mouse model to investigate this relationship, creating a closely mimicked real-world condition in which mice were continuously exposed to live non-tuberculous mycobacteria through drinking water, after being administered the BCG vaccine.

What the researchers found was contrary to prevalent opinion about vaccine efficacy. Their results, published in Cell Reports, showed a close to 50% increase in prolonged protection against tuberculosis in mice who were continuously exposed to environmental mycobacteria after BCG vaccination. The team also performed detailed analyses using a novel technology—spatial transcriptomics—that showed the immunological mechanisms associated with the protection. Namely, the mice with continuous exposure plus the vaccine showed an immune response comprised of B cells and antibodies as well as new growth of lymphatic structures in the lungs.

The link is intriguing to the scientists, but they must consider the many other environmental factors that characterize countries with high incidence of tuberculosis and might also affect vaccine efficacy. These include parasitic infections as well as the prevalence of biomass burning in homes, which is a known cause of lung disease.

Nonetheless, the findings offer a new avenue of inquiry around inducing a more effective and reliable immune response than current vaccines do, possibly through an oral rather than intradermal route.

Incidence of tuberculosis since the COVID-19 pandemic began has increased across the world due to lack of diagnosis and access to treatment, including in the United States, according to Henao-Tamayo.