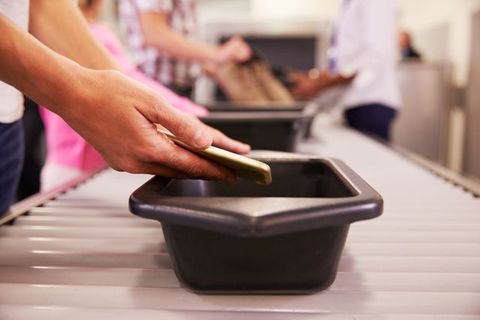 Welp, here’s something that could kill your wanderlust.

You know those plastic bins that hold your stuff when you go through airport security? Apparently, they have more germs than a toilet.

This is according to a new paper in BMC Infectious Diseases, which found 10 respiratory viruses — including the common cold and flu — lurking on various surfaces at the Helsinki-Vantaa airport in Finland. The researchers visited several times during peak 2015-2016 flu season to collect germ samples right after the airport’s morning, noon, and mid-afternoon rushes.

It turns out, those plastic bins that hold your cell phone, wallet, shoes, and other personal belongings contained more samples of germs than any other tested area in airport — including toilet flushers, elevator buttons, and the flight check-in machine.

The germs found in the bins could cause you to develop a cold, the flu, or bronchitis. Talk about a ruined vacation.

According to the paper, the boxes are extra germy because they’re touched by almost everyone at the airport — and unlike the toilets, they’re rarely cleaned. The researchers suggest that airports could offer hand sanitizer and frequently disinfect the trays to stop the spread of germs.

Of course, these are just the results from one airport, so it’s not necessarily representative of every airport in the world. (Although let’s be honest: Have you ever seen anyone dousing themselves in hand sanitizer in the airport security line?)

No matter where you are, it’s a good idea to wash your hands to reduce your chances of getting sick. For more tips on preventing a cold, click here.