The secret to happiness? Be more like Winnie the Pooh! Harvard professor claims the lovable bear is the ‘most contented and wise creature ever imagined’

The secret to happiness may be taking inspiration from Winnie the Pooh.

As the ‘master of Zen’ we could all learn something from the honey-loving creature’s perspective on life, Professor Chopra adds.

‘Perhaps the single-most contented and wise creature ever imagined is Winnie the Pooh.

‘There’s much we can all glean from Pooh’s implacable calm and goodwill,’ he adds. 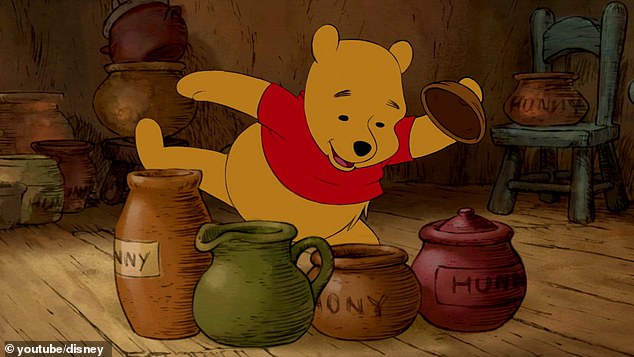 The secret to happiness may be taking inspiration from Winnie the Pooh, a professor claims

Writing in the article ‘What Can We Learn From Winnie the Pooh – 3 Things you can do to be a happier you’, Professor Chopra said: ‘The master of Zen and the art of honey-tummy maintenance has forgotten more about being happy than most of us will ever learn.

‘In fact, he forgets nearly everything that isn’t related to one of his deep, loving friendships.

‘Winnie the Pooh brings more to bear on wisdom than the average bear and his wisdom can be garnered from the charming stories.’

Writing in Psychology Today, Professor Chopra argues we could all learn something from Pooh’s attitude during tough times.

‘Simply put, it’s this: Pooh bear chooses to put his challenges into perspective.

WINNIE THE POOH’S MOST INSPIRATIONAL QUOTATIONS

‘Some people care too much. I think it’s called love’

‘Love is taking a few steps backward, maybe even more…to give way to the happiness of the person you love’

‘Rivers know this: There is no hurry. We shall get there some day’

‘Life is a journey to be experienced, not a problem to be solved’

‘A day without laughter is a day wasted’

‘We didn’t realise we were making memories, we were just having fun’

‘When life throws you a rainy day, play in the puddles’

‘The sun still shines even when it’s hiding’

‘When reminded of something he has inadvertently mucked up, he will dismiss his mistake with a heartfelt apology,’ he said.

To show Pooh’s loving nature, Professor Chopra quotes: ‘A day without a friend is like a pot without a single drop of honey left inside.’

‘Like Pooh, when you are happy, you can’t help spreading joy to others,’ he writes.

Professor Chopra ends with a dialogue between Pooh and Piglet.

‘Make every day count. Pooh knows these simple things, now you do, too,’ Professor Chopra concludes.