The high-tech ‘tampon’ that could alert you to early signs of disease: Device that will launch in Britain next year records health data by measuring different biomarkers in the blood

A new invention that combines high-tech biosensors with a sophisticated app could spell the end to the embarrassment of periods and pave the way for a new era of health- care diagnosis.

The leakproof silicone alternative to a tampon, which is being developed with government funding, looks like a miniature folding umbrella.

It has sensors embedded in it that not only tell you when it needs to be emptied, but also record health data by measuring different biomarkers in blood.

The first version of the device, called the Emm, will launch in Britain next year.

In future, refinements of the device mean that data on collected blood could be used to detect early signs of diabetes, cholesterol, gynaecological disease and even fertility levels.

The Emm will also be able to monitor specific pre-existing conditions without the need for a conventional blood sample, says its maker. 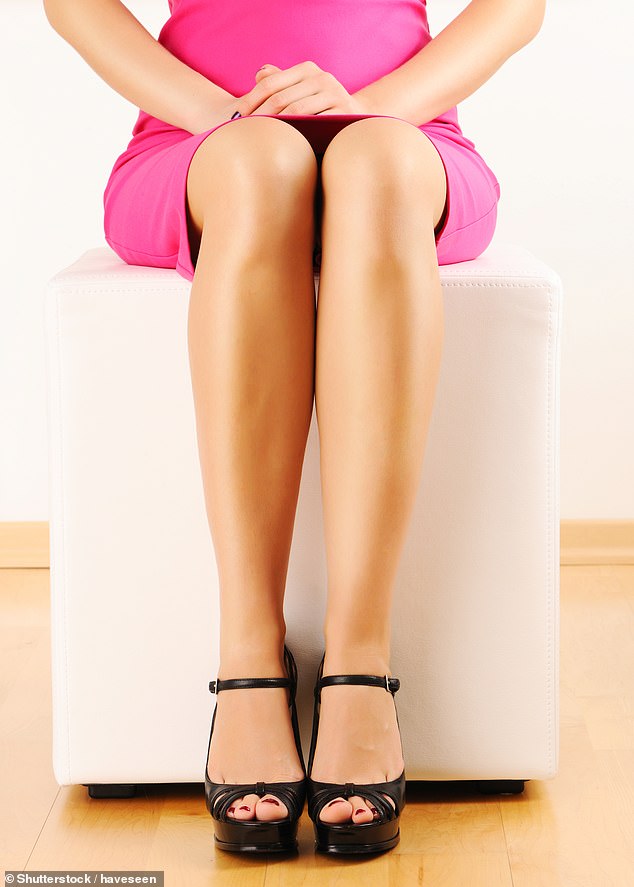 While in recent years there’s been growing interest in the diagnostic potential of menstrual blood, the Emm — a collecting cup — will be the first device to provide this.

The innovation comes at a turning point in attitudes to menstruation. It was only in 2017 that the manufacturers of Bodyform pads were given approval for a TV advert that appeared to show actual blood.

Now 75 years after the first Wimbledon tennis tournament was held, women players are going to be able to wear coloured pants, rather than traditional white.

The first research suggesting menstrual blood could be used for diagnosis and prevention of disease emerged only recently.

Four years ago, a team at Stanford University in California published research in the Journal of Clinical and Laboratory Medicine showing it could be used to monitor how many eggs a woman had left in her ovaries, giving a clue to her chances of getting pregnant, as well as her kidney function and six other biomarkers.

The advance means high-tech health and fertility monitoring could be routinely available to all women: ‘These results provide data to support the potential of using menstrual blood-based testing as an alternative to systemic blood analysis,’ says the team, led by Paul Blumenthal, a professor of obstetrics and gynaecology at Stanford, who has no connection to the Emm project.

‘Such an alternative testing approach has the potential to change practice and potentially improve safety, convenience and cost-effectiveness of blood analysis for both diagnosis and therapeutic monitoring among menstruating women.’ 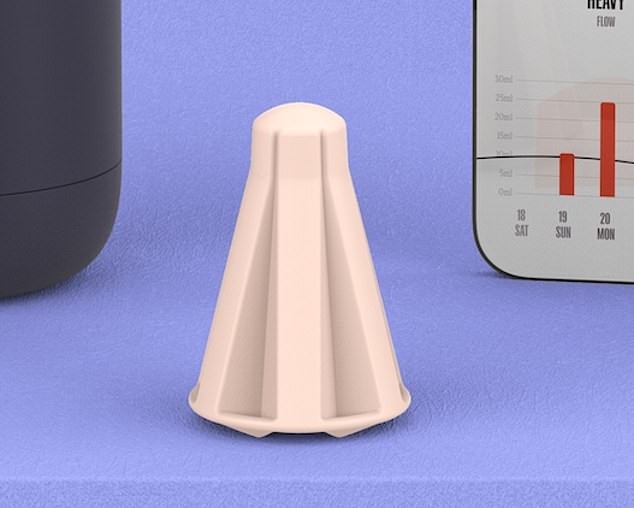 The first version of the device, called the Emm, will launch in Britain next year. In future, refinements of the device mean that data on collected blood could be used to detect early signs of diabetes, cholesterol, gynaecological disease and even fertility levels

The product, which comes with its own handbag carrier, applicator and rapid ultraviolet sterilising unit, will cost around £150 and last for at least three years.

Data is collected by sensors in the device and sent wirelessly to an app which will record menstrual cycle and blood flow and predict the onset of a period using a woman’s personalised data.

Alex Dodl, 24, from Milton Keynes, was one of the first volunteers to test the Emm (she works for a design technology consultancy used by the developers of the device). ‘It is comfortable, easy to use, and it works,’ she says. ‘I couldn’t feel that it was there.’

‘Menstrual cu-ps don’t create the waste and environmental damage of tampons and pads, but it is often hard to get them into the right position.

‘The Emm folds itself into the right shape and you then put it into the applicator to insert it. It’s also easy to remove, and it folds back in on itself so there’s no spillage.

‘More younger women, like me, are looking for environment-friendly alternatives to tampons and pads. This device is a better and more high- tech alternative.’

The Emm is the brainchild of 30-year-old Londoner Jenny Button, a law graduate from Bristol University.

She used £60,000 she’d made from an earlier start-up (selling discounted designer clothing samples) to develop the Emm.

‘I’ve always been interested in finding out how my body’s working and what it’s doing,’ she says.

‘During lockdown, all people talked about was analysing their health. I was thinking about how wearable devices might be developed to do this as I stared at a box of tampons on the shelf.’

In that Eureka moment, in May 2020, Jenny, who has no formal background in science, engineering or medical devices, set to work with a pen and paper and designed a miniature umbrella to be made from super-fine silicone and pushed in place via an applicator.

Jenny knew she needed an engineer with experience using superfine silicone and working with ‘biosensors’ capable of analysing body functions. Scouring the internet, she found Chris van Kempen, a 35-year-old specialist working at Dyson, and an expert in the technology of implanting biosensors in ultra-thin silicone. Armed with a £150,000 investment from an entrepreneur who’d backed her previous start-up, she persuaded Chris to leave his job and join her project.

There were numerous hurdles in the Emm design process. Little reliable data is available on the blood volume lost in a normal period, the maximum hourly volume, or even the variation in the vagina diameter where it meets the cervix (it turns out to be anything between 2-5cm).

Chris took on the project in June 2020, and it took him two years to get the dimensions right — initially using data from sheep, which was all that was available — and to create a reliable flexible seal that will come in two sizes.

‘It had to fold in and slide into place through an applicator which is 23mm (about ¾in) in diameter with electronic sensors embedded in silicone that’s only 0.8mm thick,’ he says.

The device alerts the woman to the expected onset of her period so the Emm can be inserted in time. It has an ultra-smooth tampon-style applicator and the blood-collecting cup opens out like an upside-down umbrella once it is correctly in place.

It will then collect data on different hourly rates of blood loss, as well as monitoring biomarkers.

‘The electronics are concentrated on a small area of the base, with sensing elements that go up the segments of the ‘umbrella’ and detect the level of fluid,’ explains Chris. ‘It holds 30ml, so can be left in place for 12 hours during the day or overnight.

Those with heavy bleeding [at least one in five] will also be able to use it without the risk of leakage because of the capacity.’

Jenny developed the idea to a usable product, which has attracted almost £1 million in funding, including £300,000 from the Government’s innovation funding scheme, Innovate UK.

A study in Cleaner Engineering and Technology journal this year calculated there are 15 million menstruating women in Britain, producing 3.3 billion used tampons and pads, much of which is wrongly flushed down loos, blocking drains and polluting beaches.

Products such as the Emm could also eliminate greenhouse gas emissions from the disposal of these products. Richard Luxton, a professor of bio-sensing technology, at the University of the West of England, has also helped Emmtech via the university’s health technology transfer scheme, which provides funding for business start-ups.

His research is focused on developing new rapid-detection technologies for ‘point of care diagnostics — things people can do themselves’, he explains.

‘You will be able to use this device to pick up problems with normal fertility hormones, to detect early signs of polycystic ovaries [a hormone disorder where fluid-filled sacs form around the eggs, affecting fertility]; endometriosis [where womb-like tissue develops elsewhere in the abdomen, causing pain and also affecting fertility]; or even ovarian cancer, all of which could be seen from menstrual blood biomarkers.

‘The basic technology is already there and we are getting funding to do much more with this device. Wearable technology is becoming a big thing in diagnostic biochemistry and this is the sort of thing we’re looking at for the future.

‘It is going to be very useful indeed,’ he adds.

Light up your life

The best home lighting for your health. This week: Your bedroom 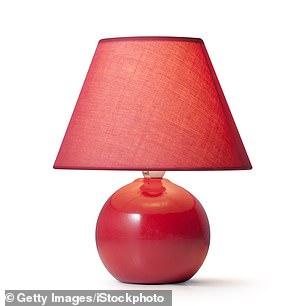 Keep your bedroom as dark as possible, say researchers who have shown that exposure to light at night — from street lighting or night lights — can increase the risk of heart problems and type 2 diabetes.

If you can see your hand in front of your face but wouldn’t be able to read the words on a page if you were holding a book, the lighting is just right, says Professor Daniela Grimaldi, a neurologist at Northwestern University in the U.S. She showed that heart rate, which normally falls as our body relaxes during sleep, stays raised in those exposed to light, which reduces the body’s ability to recover from the day’s stresses.