The baby born with TWO FACES: Two-month-old boy has an extra face and brain from his conjoined twin who failed to develop a body

A baby has been born in Indonesia with two faces because his conjoined twin did not develop properly in the womb.

Two-month-old Gilang Andika, from Batam, a city in Indonesia about 20 miles (32km) across the sea from Singapore, has two faces and two brains but just one head.

The complication has left him looking disfigured and suffering from a potentially fatal brain condition, which is causing fluid to build up.

Although he has just one body with two arms and two legs, Gilang is technically a conjoined twin – a condition which affects one in every 250,000 births.

On his head he has the face and brain of a sibling which did not grow its own body in the womb, because their mother’s egg did not completely split in two during pregnancy.

His parents, Ernilasari and Mustafa, now desperately want help to save their son’s life after local doctors told them they were unable to operate. 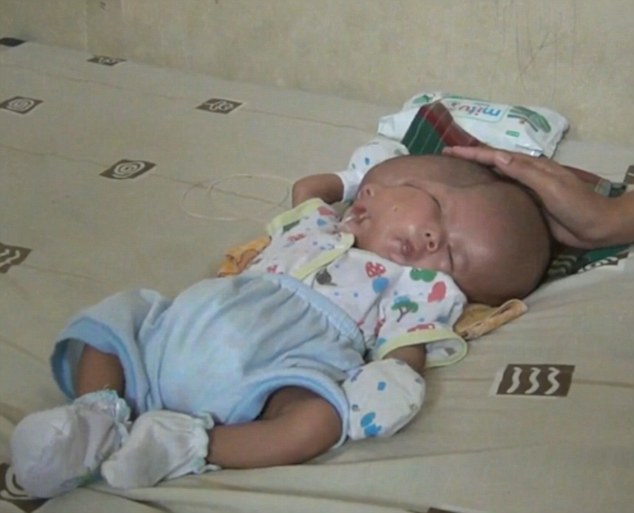 Two-month-old Gilang Andika, from Batam in Indonesia, was born with two faces and two brains because he is a conjoined twin, however his sibling did not develop a body

Because of his rare predicament, Gilang cannot be breastfed, so has to be fed milk through a tube.

And doctors have said he is not likely to live long because of his condition.

The unfortunate infant also has a condition called hydrocephalus, which is caused by a build-up of fluid in the brain.

Many babies who are born with hydrocephalus have long-term brain damage, which can cause learning disabilities, speech, vision or memory problems, or epilepsy.

Mother Ernilasari and father Mustafa did not know about their son’s serious illness until he was born by Caesarean section.

Parents cannot afford treatment to save their son

They want to seek treatment for Gilang, but they don’t have the money.

Dr Nenden Ismawati, who looked after Gilang at Awal Bros Hospital in Batam, says it is unlikely doctors will be able to perform surgery.

He told Kompas News: ‘Indeed, we suggested [surgery] to one of the hospitals in Jakarta which has better equipment than Awal Bros Hospital, but it also does not mean it he can be operated on right away, because doctors in Jakarta are still discussing the case.’ 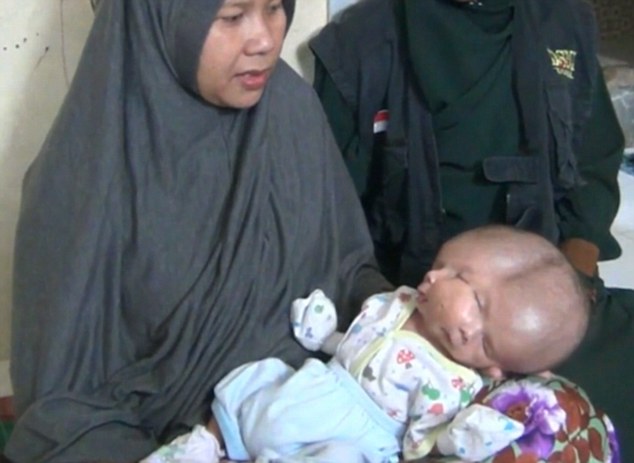 Mother Ernilasari (left) did not feel anything was wrong during her pregnancy, and doctors did not pick up on the problem until after Gilang was born – despite doing three ultrasound scans 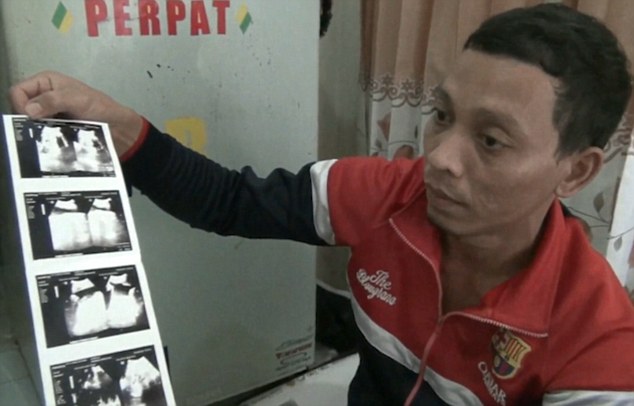 Gilang’s parents are now desperate for help for their son because they cannot afford his treatment and local doctors say they do not have the equipment to operate (pictured, his father Mustafa holding the ultrasounds which failed to pick up Gilang’s condition) 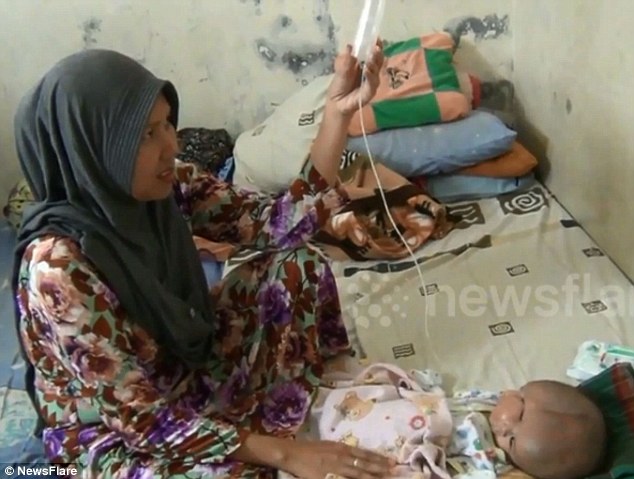 Gilang cannot be breastfed because of his condition so must be fed through a tube, and also has a condition called hydrocephalus, which is caused by a build-up of fluid in the brain (pictured: Gilang’s mother Ernilasari)

Doctors did not notice the problem in three ultrasound scans

During her pregnancy Ernilasari said she did not feel anything strange, and doctors at the Chamata Sahidiya Panbil Hospital did not notice the problem despite three ultrasound scans.

‘The doctor just said the baby’s head is enlarged and he is in breech position,’ Ernilasari said.

Now Gilang’s parents are desperate to find a way to separate their child’s head, as the abnormality has caused health problems for the little one.

It is believed he has a disorder called diprosopus, one of the rarest deformities in humans, and one which most do not survive beyond birth.

The condition is known as craniofacial duplication and causes part or all of the face to be grown twice because of a problem during the egg’s division in the womb.

Curing Gilang will likely involve risky surgery to remove one of his brains and faces, and part of his skull.

WHAT ARE CONJOINED TWINS?

Conjoined twins occur when siblings have their skin or internal organs fused together.

Conjoined twins are caused by a fertilised egg beginning to split into two embryos a few weeks after conception, but the process stops before it is complete.

The most common type is twins joined at the chest or abdomen.

Separation surgery success depends on where the twins are joined.

Doctors can only tell which organs the siblings share, and therefore plan surgery, after they are born.

At least one twin survives 75 per cent of the time.

The condition is also known as Siamese twins, named after the first pair of internationally famous conjoined twins, Chang and Eng Bunker (1811–1874), who were from Siam.