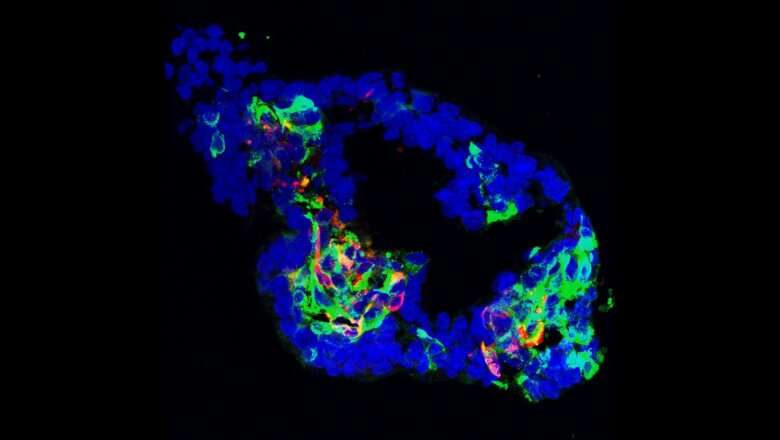 Maturity-onset diabetes of the young (MODY) is a disease caused by single-gene mutations. The genes typically affected by MODY are important for the development and function of beta-cells, which are crucial for maintaining insulin and glucagon balance in the body. MODY occurs in young adults under 25 years of age and shows very diverse disease characteristics, with some patients needing to use diet and medication and others needing to use insulin injections to manage the disease.

A new paper authored by Dr Ana-Maria Cujba and Dr Mario Alvarez-Fallas, arising from research conducted in Dr Rocio Sancho’s lab, uncovers how the most common MODY3 mutation in the HNF1A (hepatocyte nuclear factor 1A) gene can cause diabetes. The researchers were intrigued by the diverse MODY characteristics across patients harboring the same genetic mutation, even within the same family.

In a dish they differentiated human induced pluripotent stem cells (iPSCs) from MODY3 patients towards the beta-cell lineage in-vitro. They derived pancreatic organoids (simplistic and microscopic ‘mini-organs’) from healthy and MODY3 iPSCs to understand the effect of the mutation on beta-cell development and function. They found that the MODY3 mutation results in the formation of a shorter HNF1A protein that impairs binding to itself and to HNF1B, therefore reducing expression of genes important for beta-cell development. In turn, this resulted in a developmental defect in the MODY3 lines, with a reduced formation of functional pancreatic progenitors and beta-cells in-vitro.

“Even though mouse models and gene knockout models for genes involved in monogenic diabetes have been instrumental in understanding the general aspects of this disorder, our study underlines the importance of using patient-specific mutations in conjunction with human iPSC-derived pancreatic models to decipher more subtle and unknown aspects of the disease,” says Sancho

The diversity of phenotypes observed for the MODY3 patient lines used in this study implies that the mutation can have milder or more severe effects depending on the genetic background and other clinical factors, helping researchers to better understand the diversity of responses to MODY3 disease.

“We established an in-vitro human pancreatic progenitor organoid model that revealed the effect of the MODY3 mutation in early and late stages of pancreatic development. Thus, we believe that our organoid model could be used by the scientific community to understand other subtypes of monogenic and polygenic diabetes,” says Cujba