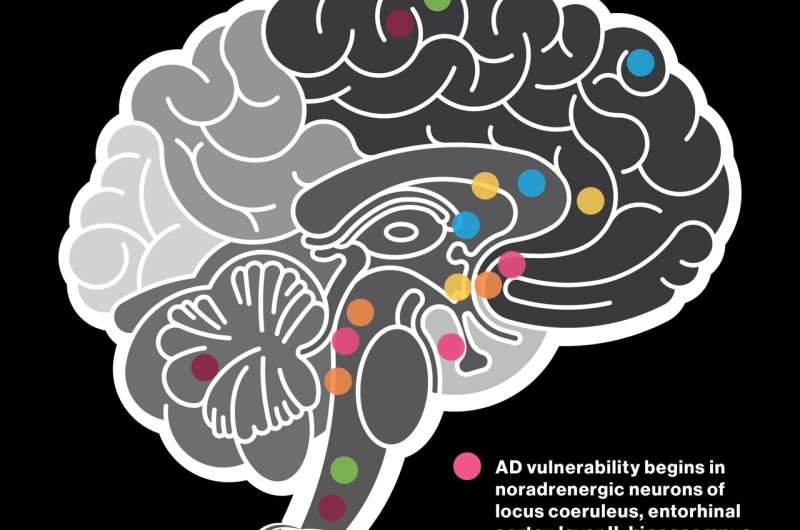 A perplexing range of neurodegenerative diseases are known to attack distinct regions of the brain, causing severe cognitive and motor deficit. The combined impact of these (generally fatal) diseases has inflicted a devastating toll on society. New insights suggest many of these afflictions have their origin in a constellation of common processes, which play out in different ways as each disease develops.

The study uses an innovative approach, which includes the machine learning analysis of RNA found in whole blood. By comparing multiple diseases, researchers can identify which RNA markers occur across several neurodegenerative diseases and which are unique to each disease.

“It appears that multiple neurodegenerative diseases harbor similar fundamental dysfunctional cellular processes,” says Huseby, a researcher with the ASU-Banner Neurodegenerative Disease Research Center. “Differences between diseases may be key to discovering regional cell-type vulnerabilities and therapeutic targets for each disease.”

The blood samples used for the study were derived from a publicly available data set known as the Gene Expression Omnibus. Each of the six neurodegenerative diseases were probed. As the machine learning algorithm combed through thousands of genes, it assembled sets of RNA transcripts that optimally classified each disease, comparing the data with RNA samples from healthy patient blood.

The study also identified uncommon transcripts for each disease, which may represent unexplored disease pathways. Such disease-specific outliers may be explored as a potential source of diagnostic biomarkers.

For example, while synaptic loss was a common feature in all six of the diseases analyzed, transcripts related to a phenomenon known as spliceosome regulation were only detected in the case of Alzheimer’s disease. (The spliceosome is a protein complex found in the cell nucleus, essential for proper cell function. Defective splicing of RNA is associated with disease.)

The investigation of blood biomarkers for neurodegenerative diseases, coupled with powerful statistical methods using artificial intelligence, has opened a new window on these serious afflictions. Blood can be easily sampled in living patients at all stages of health and disease, providing a powerful new tool for early diagnosis.

According to the United Nations, when all neurodegenerative diseases are considered, the global death toll may top a staggering 1 billion people. The course of many such diseases is protracted and pitiless, causing not only grave suffering to patients but a massive economic burden on health care systems. New methods of early diagnosis, improved treatments and possible methods of prevention are vitally needed.

Most neurodegenerative diseases, however, have been tricky to accurately diagnose and stubbornly resistant to treatment, including Alzheimer’s disease (AD), the leading cause of dementia. While genetic factors do play a role in the development of AD, most cases are regarded as sporadic, meaning the underlying causes are unclear. This is also the case with three other diseases highlighted in the study: frontotemporal dementia, ALS and Parkinson’s disease. Huntington’s disease and Friedreich’s ataxia appear to be genetically determined and are said to be familial.

Signposts of neurodegeneration are detectable in both the central nervous and peripheral vascular systems. The diseases may also migrate from their point of origin to distant brain regions, where they inflict most of their damage.

The study describes RNA clusters or trees selected by the machine learning process, which uncovers patterns of gene expression common to the six neurodegenerative diseases explored in the study as well as expression profiles that are distinct and disease dependent. Thousands of such trees are created and statistically compared by the machine learning algorithm, to pick out groupings of 20 transcripts that most closely align with known disease pathways in the diseases under study.

The findings offer clues about common cellular features that may play a role in jump-starting processes of neurodegeneration. The study also raises puzzling questions about how distinct disease forms ultimately develop from these common elements.

From the RNA transcripts extracted from blood, some 10,000 genes are expressed. The machine learning algorithm, known as Random Forest, categorizes the data and compares results with gene expression profiles known to be associated with disease-linked biological pathways.

Screening of whole blood and examination of the complete RNA profile can overcome the limitations of many other forms of testing, which are often less comprehensive as well as expensive, highly invasive and labor intensive. Diagnosis through whole blood, in contrast, can be carried out at low cost virtually anywhere in the world. Blood results can be tracked over time, providing a valuable window on disease progression. Research of this kind may also encourage new modes of treatment.

The results suggest a tantalizing possibility: Transcriptional changes shared by multiple disease types may provide the initial seeds that later develop into each of the distinct brain afflictions. The mechanisms responsible for these common factors germinating to produce diverse diseases and symptomologies, attacking different regions of the brain, remain a central puzzle to be solved.