The credibility of scientific findings hinges on their reproducibility. As a scientist, it is therefore disastrous when you are unable to replicate your own findings. Our laboratory has found itself in just this situation several times; in each instance, unintended environmental exposure distorted our data. Our first accidental foray into toxicology 20 years ago convinced us of the need to understand the reproductive effects of environmental chemical contaminants. The latest twist in our journey down that road adds a new dimension to an old concern, BPA.

Bisphenol A, or BPA, is a man-made chemical that has become a household word. It is a plasticizer used in such a wide range of consumer products that daily exposure is inevitable. People absorb BPA through our skin – from receipts and contamination of personal care products and water. We ingest it via contamination from plastic food containers, and food and beverage liners. We even inhale it as a contaminant in dust. Studies of this chemical number in the thousands, but whether BPA is hazardous to our health remains “controversial.” Here’s why: Although data from traditional toxicology testing provide little or no evidence of harm, independent investigators like us have reported effects induced by very low doses thought to be in the realm of human exposure.

The implications of these low-dose effects for human health and reproduction captured media attention and increased consumer unease. In response, manufacturers introduced BPA replacements by producing structurally similar bisphenols. As a result, it no longer is simply BPA contaminating our environment but an ever-increasing array of bisphenols. Our recent studies of several replacements suggest effects on the production of eggs and sperm similar to those induced by BPA.

We stumbled into the BPA world 20 years ago when cages housing mice for our studies were damaged when inadvertently washed with a detergent intended for the floor. Unbeknownst to us the detergent caused BPA to leach out of the cages. We happened to be studying eggs from young females and saw an immediate increase in eggs with scrambled chromosomes that would give rise to chromosomally abnormal embryos. In the intervening 20 years, our studies and those of colleagues have described the effects of BPA exposure on the developing brain, heart, lung, prostate, mammary gland and other tissues, and our studies have described serious effects on the production of both eggs and sperm. Together these findings inflamed debate about the safety of BPA and resulted in the rapid appearance of “BPA free” products.

Remarkably, almost exactly 20 years after the BPA exposure of our mice, we recently found ourselves, once again, victim of an environmental contamination that halted our research. We were working to pinpoint the critical windows of BPA exposure when we noticed that something was interfering with our experiments. This time the effect was harder to run to ground: Again, it appeared to be due to cage damage, but the damage was milder, limited to a subset of cages, and the effect on our results was evident in some animals and not others.

The major culprit this time was not BPA but the replacement bisphenol, BPS, leaching from damaged polysulfone caging. Knowing what it was didn’t make eliminating it easy. We tried several less expensive methods to solve the problem, but ultimately had to replace all the cages and water bottles in the facility. When we could resume our studies, we experimentally tested four common replacement bisphenols and found effects on sperm and egg production in our mice analogous to those that result from BPA exposure. 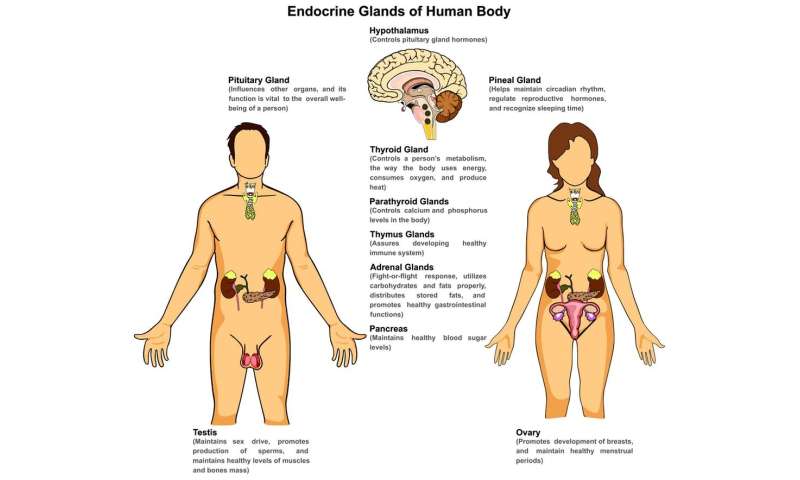 The possibility that exposure effects may span generations has been a growing concern. Our recent experience with accidental exposure allowed us to ask if BPS exposure effects persisted across generations, and if so, for how long. Our data suggest persistence of effects for up to three generations, with full recovery evident in great-grandsons.

Widespread use of BPA-like chemicals

Do we simply have bad lab karma? No, we think we have supersensory powers. The process of making eggs and sperm is tightly controlled by complex hormone signals. This makes it vulnerable to endocrine-disrupting chemicals like bisphenols – chemicals that can interfere with our body’s hormones. Bisphenol contaminants cause a seismic shift in our data, but it’s not that the research of others isn’t also affected, but most remain blissfully ignorant.

Importantly, our laboratory knew what data from unexposed animals should look like. What if we hadn’t? We would have misinterpreted our results. If we had been asking if BPA had an effect, background bisphenol contamination would have diminished it, causing us to conclude that BPA had little or no effect.

This isn’t merely hypothetical. BPA use is so prevalent in consumer products and routine laboratory materials (like mouse caging materials or culture flasks) that low-level contamination of unexposed control groups is increasingly difficult to avert. Data and conclusions from CLARITY-BPA, a large, ambitious collaborative study conducted by three U.S. agencies, are coming out now. CLARITY was launched to understand why findings from traditional toxicology studies of BPA and those of independent investigators differ. Animal contamination was evident in a pilot study, but the source could not be determined, and the CLARITY initiative proceeded.

Given our experience, we have great concern about drawing any conclusions from CLARITY data because there is no way to determine the impact of low-level contamination.

The bisphenol story details the evolution of only one class of the endocrine-disrupting chemicals that are common contaminants in our lives. The ability of manufacturers to rapidly modify chemicals to produce structurally similar replacements undermines the ability of consumers to protect themselves from hazardous chemicals and federal efforts to regulate them.