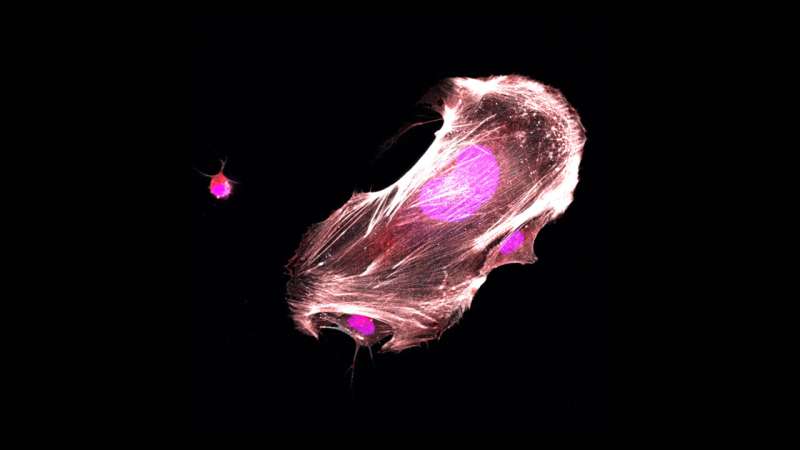 Scientists at Cold Spring Harbor Laboratory (CSHL) have discovered a new drug target for Ewing sarcoma, a rare kind of cancer usually diagnosed in children and young adults. Their experiments show that the cells causing this cancer can essentially be reprogrammed with the flick of a genetic switch.

Shutting down a single protein forces the cancer cells to take on a new identity and behave like normal connective tissue cells, a dramatic change that reins in their growth. This discovery suggests researchers may be able to stop Ewing sarcoma by developing a drug that blocks the protein known as ETV6.

Ewing sarcoma causes tumors to grow in bones or the soft tissues surrounding them. Once a tumor begins to spread to other parts of the body, it can be very difficult to halt the disease’s progression. Even for patients with positive outcomes, treating Ewing sarcoma often causes toxic side effects. New treatments are badly needed, says CSHL Professor Christopher Vakoc, who led the research on ETV6.

Vakoc and his colleagues became excited about ETV6 when their experiments revealed that Ewing sarcoma cells seem uniquely dependent on this protein. “This protein is present in all cells. But when you perturb the protein, most normal cells don’t care,” he says. “The process by which the sarcoma forms turns this ETV6 molecule—this relatively innocuous, harmless protein that isn’t doing very much—into something that’s now controlling a life-death decision of the tumor cell.”

Postdoctoral researcher Yuan Gao works in Vakoc’s lab. When Gao blocked ETV6 in Ewing sarcoma cells grown in the lab, she witnessed a dramatic transformation. “The sarcoma cell reverts back into being a normal cell again,” she says. “The shape of the cell changes. The behavior of the cells changes. A lot of the cells will arrest their growth. It’s really an explosive effect.”

Vakoc and Gao hope other researchers will use what they’ve learned to begin exploring potential therapies for Ewing sarcoma that work by switching off ETV6. They say their biochemical analyses, which identify specific spots in the ETV6 protein that are key to its function in cancer cells, could help guide drug development. Because their experiments have shown that most cells are unaffected by the loss of ETV6 activity, they are optimistic that such a drug might be able to eliminate cancer cells while causing few, if any, side effects.

The study is published in the journal Nature Cell Biology.