Watch what cigarettes really do to your HEART: Shocking video reveals how the habit damages the organ

A shocking video has revealed the full extent of the damage caused to the heart by smoking.

Released by the World Health Organization (WHO), it aims to raise awareness of the effect of cigarettes on the heart and encourage smokers to quit.

The 30-second clip starts with a heart beating slowly, as it asks viewers if they were aware that tobacco is a major cause of heart disease.

But as the video proceeds, it beats quicker and more smoke can be seen puffing from its valves – designed to mimic being overworked.

The footage, released yesterday for World No Tobacco Day, ends with the message ‘protect your heart and choose health – not tobacco’.

Figures estimate that tobacco is the primary cause of 17 per cent of all deaths from heart disease, the world’s leading killer. 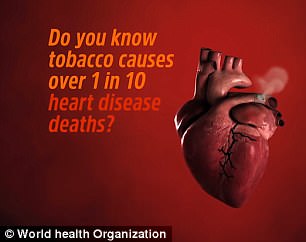 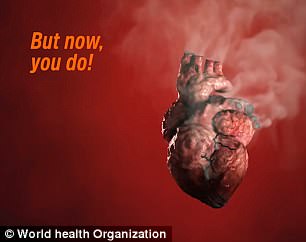 Released by the World Health Organization, it aims to raise awareness of the effect of cigarettes on the heart (pictured: a healthy heart, left, and diseased heart, right)

Dr Tedros Adhanom, WHO chief, yesterday called for more awareness over the links between smoking and heart disease.

He said: ‘Most people know that using tobacco causes cancer and lung disease, but many people aren’t aware that tobacco also causes heart disease and stroke.

‘This World No Tobacco Day, WHO is drawing attention to the fact tobacco doesn’t just cause cancer, it quite literally breaks hearts.’

How many people does smoking kill?

Smoking is known to kill more than seven million people across the world each year, including 890,000 from breathing in second-hand smoke.

But many people are unaware that nearly half of those deaths, around three million, are due to heart disease, including heart attacks and strokes.

How does tobacco damage the heart?

Tobacco smoke contains more than 7,000 chemicals, including tar and others that can narrow arteries and damage blood vessels.

While nicotine – a highly addictive toxin found in tobacco – is heavily linked with dangerous increases in heart rate and blood pressure.

Smoking also unleashes poisonous gases such as carbon monoxide, which replaces oxygen in the blood – reducing the availability of oxygen for the heart. 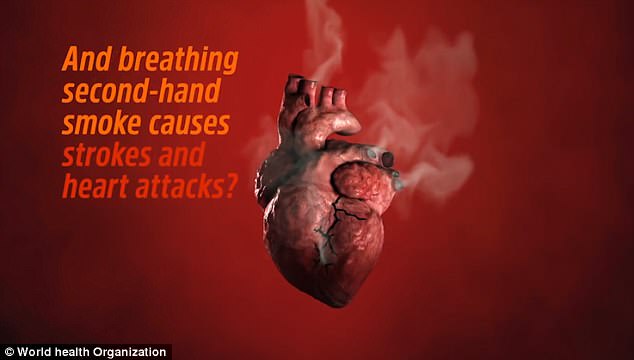 The 30-second clip starts with a heart beating slowly, as it asks viewers if they were aware that tobacco is a major cause of heart disease 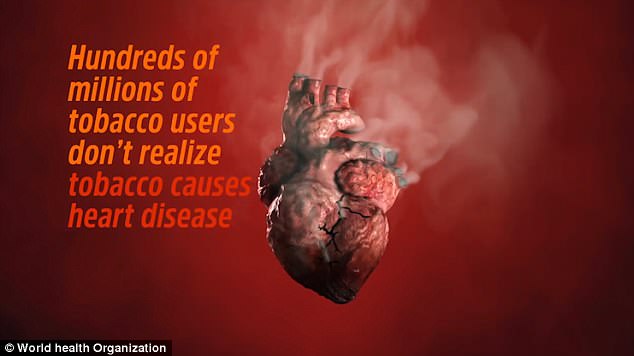 But as the video proceeds, it beats quicker and more and smoke can be seen puffing from its valves – designed to mimic being overworked

A lack of awareness

Yet in many countries, there is low awareness that smoking significantly increases your chances of developing cardiovascular disease, WHO said.

In China for instance, a large survey showed more than 60 per cent of the population is unaware that smoking can cause heart attacks.

While in India and Indonesia, more than half of adults are unaware that smoking can cause strokes.

Dr Douglas Bettcher, head of WHO’s non-communicable disease prevention unit, said: ‘Governments have the power in their hands to protect their citizens from suffering needlessly from heart disease.’

‘Measures that reduce the risks to heart health posed by tobacco include making all indoor public and workplaces completely smoke-free and promoting use of tobacco package warnings that demonstrate the health risks of tobacco.’

WHO estimates that the prevalence of smoking across the world has dropped from 27 per cent at the turn of the century to 20 per cent in 2016.

But it warned that the pace of reduction was too slow. Due to population growth, the number of smokers in the world has remained relatively stable at around 1.1 billion.

The damage of smoking on the lungs

The new clip comes after a separate video earlier this month showed the difference in healthy lungs and those of a smoker who got through a pack-a-day for 20 years.

Uploaded by North-Carolina based nurse Amanda Eller, the footage showed the black, cancer-ridden lungs of the heavy smoker failing to properly inflate.

This is compared to the healthy, red-coloured lungs that are shown inflating and deflating as normal in the videos, which have been shared more than 5,000 times.

The new clip also comes after health officials in the UK claimed last summer the end of smoking is finally ‘in sight’ following a stream of quitters.

Around 680,000 adults gave up the bad habit completely in 2016, according to data from the Office for National Statistics.

Masses of smokers are instead turning to e-cigarettes, with three million Britons now believed to use the battery-powered devices containing nicotine.

Although thought to be considerably safer than tobacco cigarettes, studies have linked long-term use to heart disease and cancer.