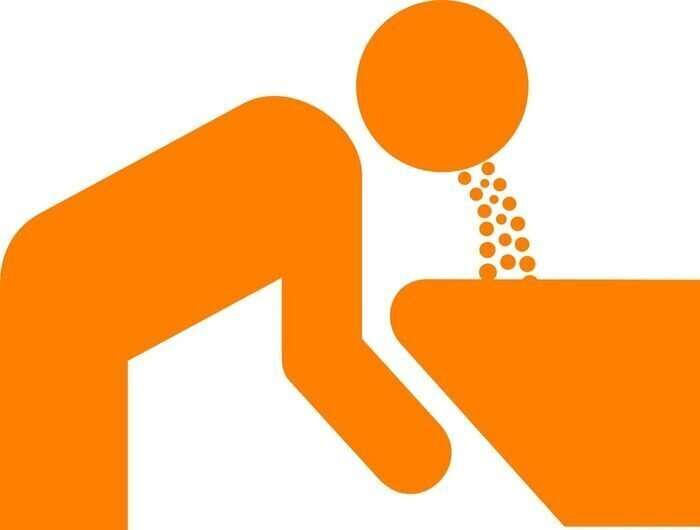 The urge to vomit after eating contaminated food is the body’s natural defensive response to get rid of bacterial toxins. However, the process of how our brain initiates this biological reaction upon detecting the germs remains elusive. For the first time, researchers mapped out the detailed neural pathway of the defensive responses from the gut to the brain in mice. The study, presented November 1 in the journal Cell, could help scientists develop better anti-nausea medications for cancer patients who undergo chemotherapy.

Many foodborne bacteria produce toxins in the host after being ingested. The brain, after sensing their presence, will initiate a series of biological responses, including vomit and nausea, to get rid of the substances and develop an aversion toward foods that taste or look the same.

“But details on how the signals are transmitted from the gut to the brain were unclear, because scientists couldn’t study the process on mice,” says Peng Cao, the paper’s corresponding author at the National Institute of Biological Sciences in Beijing. Rodents cannot vomit, likely because of their long esophagus and weaker muscle strength compared to their body size. As a result, scientists have been studying vomit in other animals like dogs and cats, but these animals are not comprehensively studied and thus failed to reveal the mechanism of nausea and vomiting.

Cao and his team noticed that while mice don’t vomit, they retch—meaning they also experience the urge to vomit without throwing up. The team found that after receiving Staphylococcal enterotoxin A (SEA), which is a common bacterial toxin produced by Staphylococcus aureus that also leads to foodborne illnesses in humans, mice developed episodes of unusual mouth opening.

Mice that received SEA opened their mouths at angles wider than those observed in the control group, where mice received saline water. Moreover, during these episodes, the diaphragm and abdominal muscles of the SEA-treated mice contract simultaneously, a pattern seen in dogs when they are vomiting. During normal breathing, animals’ diaphragm and abdominal muscles contract alternatively.

“The neural mechanism of retching is similar to that of vomiting. In this experiment, we successfully build a paradigm for studying toxin-induced retching in mice, with which we can look into the defensive responses from the brain to toxins at the molecular and cellular levels,” Cao says.

In mice treated with SEA, the team found the toxin in the intestine activates the release of serotonin, a type of neurotransmitter, by the enterochromaffin cells on the lining of the intestinal lumen. The released serotonin binds to the receptors on the vagal sensory neurons located in the intestine, which transmits the signals along the vagus nerves from the gut to a specific type of neurons in the dorsal vagal complex—Tac1+DVC neurons—in the brainstem. When Cao and his team inactivated the Tac1+DVC neurons, SEA-treated mice retched less compared with mice with normal Tac1+DVC neuron activities.

In addition, the team investigated whether chemotherapy drugs, which also induce defensive responses like nausea and vomiting in recipients, activate the same neural pathway. They injected mice with doxorubicin, a common chemotherapy drug. The drug made mice retch, but when the team inactivated their Tac1+ DVC neurons or serotonin synthesis of their enterochromaffin cells, the animals’ retching behaviors were significantly reduced.

Cao says some of the current anti-nausea medications for chemotherapy recipients, such as Granisetron, work by blocking the serotonin receptors. The study helps explain why the drug works.

“With this study, we can now better understand the molecular and cellular mechanisms of nausea and vomiting, which will help us develop better medications,” Cao says.

“In addition to foodborne germs, humans encounter a lot of pathogens, and our body is equipped with similar mechanisms to expel these toxic substances. For example, coughing is our body’s attempt to remove the coronavirus. It’s a new and exciting field of research about how the brain senses the existence of pathogens and initiates responses to get rid of them,” Cao says, adding that future research may reveal new and better targets for drugs, including anti-nausea medicines.