Scientists discover 44 depression genes – and EVERYONE has some of them, ground-breaking study suggests

Scientists have uncovered 44 genetic risk factors for depression – tripling the number of previously identified DNA links to the disorder.

In a global push to unravel the leading cause of disability in the US, 200 researchers from the UK, US and Australia found that all humans carry genetic risks for depression.

The investigation also found that existing antidepressants do in fact target some of the right genetic variants – though quite by accident.

Discovering so many new genes common to everyone represents a breakthrough for the development of new, more targeted therapies for depression. 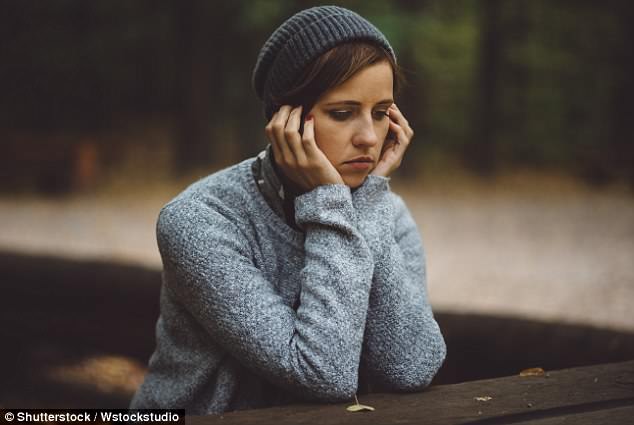 An international team of scientists has discovered 44 new genetic risks for depression, suggesting that anyone can develop the condition

Depression is the leading cause of disability globally, and, in the US it plagues more than 16 million people, costing the government $210 annually.

Mental health disorders are only becoming more common, yet science lags behind its spread, leaving millions of people to search for treatments, cycle through ill-fitting ones, or without any relief at all.

The ineffectiveness of treatments is due in large part to our pour understanding of the causes and physiology of depression – like many mental health issues.

But the new research is a ‘huge, huge step forward’ in the right direction, says one of its co-authors, Dr Patrick Sullivan, a professor of genetics and psychiatry at the University of North Carolina.

Dr Srijan Sen, a professor of psychiatry at the University of Michigan says: ‘This paper is a significant advance over previous ones and the number variants they have identified means we are really starting to get a more textured picture of what systems might be involved in depression.’

‘We need a precise understanding of the biological condition in order to treat it,’ says Dr Sullivan.

‘Look at fields like cancer and heart disease: we have an increasingly accurate knowledge of what’s going on at a fundamental level, with the proteins and genes involved in the diseases [which underlies] far more effective ways to develop therapeutics,’ he explains.

Yet, for depression, ‘up to this point, pretty much every antidepressant has been developed by chance,’ Dr Sullivan says.

His research, however, revealed that we have gotten surprisingly lucky with the the therapies on the market thus far.

‘Our findings overlaid nicely with what we know now about antidepressants that target various genes and proteins,’ he said.

‘We are definitely barking up the right tree.’

He says he hopes that the newly-discovered genes will help to ‘spur a new generation of therapies that are more effective against these awful conditions.’

The existence of 44 genetic risk factors for depression also confirms that the condition truly can strike anyone.

Dr Sullivan says that the discovery ‘provides important proof that most of us carry genes that are risk factors for depression, so the idea that some people with depression are somehow different from us is completely incorrect.’

The researchers evaluated the DNA of 135,000 people with depression and another 344,000 controls who do not suffer from the condition.

They found that, genetically, everyone is on a ‘spectrum’ of depression risks, says Dr Sullivan.

He says that we all likely inherit some depression risk factors, but depending on where we fall on that spectrum and what happens to us throughout our lives, we may or may not develop depression.

But ‘every human being can be fit into that spectrum,’ he adds.

It is worth noting, as Dr Sen does that even though the study was very large, it was based only on ‘Europeans and European-American subjects.’

‘It is important to try to replicate this work and do it in a broader set of ethnic populations,’ including African and Chinese people, Dr Sen says.

According to Dr Sen, the new research makes it possible to assign ‘a genetic risk score by looking across the whole genome to calculate overall risks for depression and that can be applied in a way that hasn’t been seen before.’

There is still a long way to go before this revelation in our understanding of depression can be turned into targeted treatment, but acknowledging the dual influences of genetics and environment will be key.

‘We assumed that this is a really complicated condition…and that’s one of the things that’s allowed us to get this far,’ says Dr Sullivan.

‘But if we can break of little pieces of this and understand them, then this can eventually lead to a better understanding.’