Schools will face a head lice epidemic this winter due to the NHS axing treatments – and poor areas will be the most affected, charity warns

Schools will face a head lice epidemic this winter due to the NHS axing treatments, a charity has warned.

A change in guidance, which was rolled out over the summer to save the NHS £100 million a year, means GPs cannot routinely prescribe nit treatments that cost the health service just £4.92 a time.

This will cause head lice to become increasingly common in schools, particularly in low-income areas, according to the charity Community Hygiene Concern (CHC).

Over-the-counter head lice treatments can cost as much as £13 per application. It is often also necessary to treat the entire family. 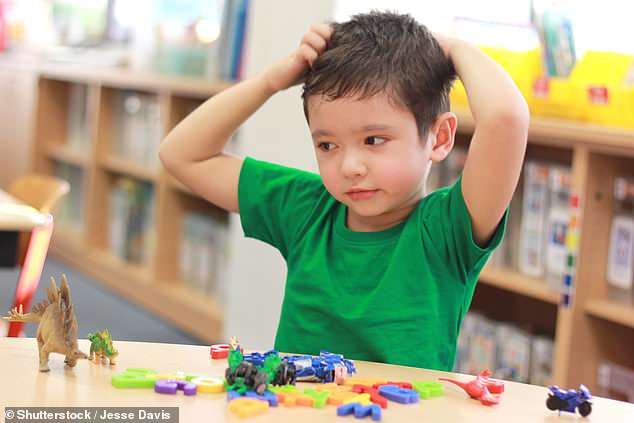 ‘Not everyone can afford to repeatedly buy head-lice treatments, which are very, very expensive and can be ineffective.’

Head lice outbreaks usually peak in autumn when children go back to school.

This is when GPs would usually prescribe hundreds of the CHC’s Bug Buster kits.

These include different sized combs that remove lice and nits – their empty eggs – without pesticides.

Since GPs were told to stop issuing such treatments, prescriptions have fallen by 90 per cent, CHC said.

And some 98 per cent of head lice are resistant to over-the-counter chemical treatments, previous research has found.

The parasites are also becoming more common with nearly half of children in the UK having had a head-lice infestation over the past five years, compared to as little as two per cent before.

As the problem is set to continue, schools may become inundated with head-lice cases.

‘Children whose parents cannot afford the treatments will be victimised and bullied,’ Ms Fry said.

WHAT ARE HEAD LICE?

Head lice are tiny insects which live and lay their eggs in hair. Their empty egg cases which stick to hair are known as ‘nits’.

Lice, which can be treated by an over-the-counter medication, quickly multiply and can cause itching and inflammation of the scalp.

In severe cases, infections can be caused when children scratch their head with dirty fingernails or if faecal matter from the lice gets into a scratch.

All people who come in contact with the infected person should also check if they have contracted the bug because it spreads easily.

Clothing, bedding and other products need to be laundered in high heat in order to kill the bugs.

If something can’t be washed, then it needs to be either dry cleaned or sealed in a bag for two weeks to help kill off the infestation.

‘Poorer children will be looked down on for causing the problem, and all the judgments and stigmas about nits will return.’

Teachers are also concerned about infestations becoming more common in their classrooms.

‘This is a shortsighted policy that clearly hasn’t been thought through,’ Dr Mary Bousted, joint general secretary of the National Education Union, told The Guardian.

‘As a result, schools will likely have to deal with more frequent and harder to control outbreaks.’

‘Lice clinics’, which promise to remove the parasites in as little as one hour, can charge up to £400.

An NHS England spokesperon argued GPs do not prescribe treatments that are readily available over-the-counter.

This is to free up millions of pounds to invest in mental-health, cancer and A&E services.

Head lice can be effectively treated by wet combing, with chemical remedies only being required in exceptional circumstances, the spokesperson added.

But Dr Louise Fearfield, clinical vice-president of the British Association of Dermatologists, argued GPs should use their discretion and prescribe head lice treatments when necessary.

This comes after research released last year found children who own smartphones or tablets are more likely to have the parasite.

Some 62.5 per cent of youngsters with such devices will experience head lice within a five-year period compared to just 29.5 per cent of children who are less technologically savvy, according to a study by Oxford University.

One explanation could be that the pests easily spread when children gather together to look at a screen, the researchers claimed.

WHAT ‘OVER-THE-COUNTER’ PRESCRIPTIONS HAVE BEEN CURBED?

From May 31, the NHS will no longer prescribe ‘over-the-counter’ remedies.

This was announced in an attempt to save money and pump it into frontline services.

Treatments for the following conditions are no longer routinely prescribed: