Why potatoes could be fuelling the nation’s obesity crisis: A baked spud contains the equivalent of 19 lumps of sugar – almost three times the amount in a can of Coca-Cola

The seemingly innocent potato could be fuelling the nation’s obesity crisis.

A new BBC documentary is set to reveal that carb-heavy foods, like the ‘humble spud’, are actually loaded with sugar.

Experts taking part in the programme have discovered there are nearly 90g of sugar in a single baked potato – the equivalent of 19 lumps of sugar.

By comparison, a Snickers bar has just under six lumps of sugar in it, and a can of Coca-Cola has seven-and-a-quarter.

Foods like bread and pasta also effectively contain a lot of sugar, because our bodies break the carbohydrates into glucose.

The findings have led scientists to conclude that carbohydrates could be driving up obesity rates in the UK. 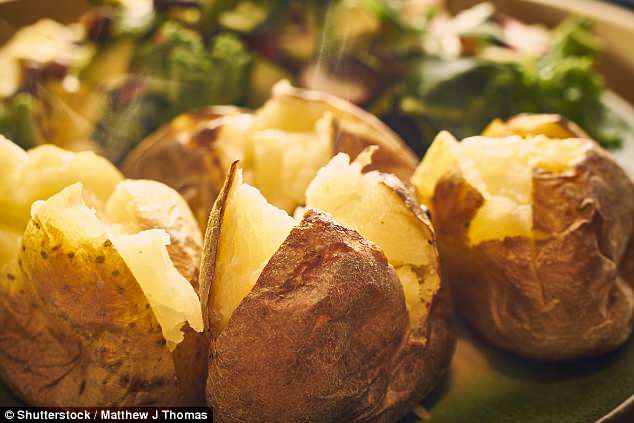 ‘Looks can be deceiving’

‘Looks can be deceiving,’ dietitian Alison Barnes told the BBC.

‘Just because a food doesn’t look sweet, it doesn’t mean it won’t ­release lots of sugar into your bloodstream.

‘When you eat a food item, like a jacket potato, your body breaks the starch down into sugar, which equates to 19 cubes.’

The BBC One documentary The Truth About Carbs, which will be shown Wednesday at 8pm, explains in what way carbohydrates could be contributing to bulging bellies.

The documentary is hosted by Dr Xand van Tulleken, a self-described ‘carbohydrate addict’, who used to weigh 19st (226lbs). 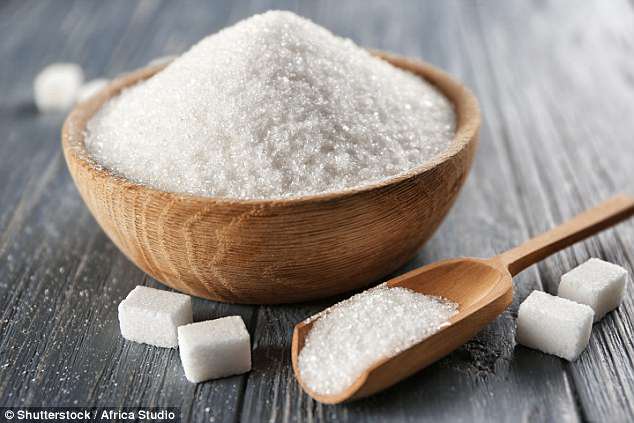 HOW MANY PEOPLE ARE OBESE?

Around two billion people are overweight or obese worldwide – almost a third of the population.

A study, published in June last year in the New England Journal of Medicine, looked at data from people in 195 countries between 1980 and 2015.

They found that a third were overweight, while 10 per cent were actually obese.

Since 1980, obesity rates in 70 countries have doubled. Meanwhile, the rate of childhood obesity has increased faster than that of adults.

Obesity is a risk factor for diabetes, heart disease and stroke, some types of cancer, and numerous other serious health problems.

The best way to prevent or tackle obesity is to eat a healthy, balanced diet and to do regular exercise – the NHS recommends between two-and-a-half and five hours per week.

Calculating a person’s BMI involves measuring their height and weight and considering their age and gender.

Work out yours or your child’s with the NHS BMI calculator.

Dr van Tulleken says it’s our consumption of carbs – not just sugars – that is causing obesity and related illnesses.

According to figures from the Organisation for Economic Co-operation and Development (OECD) released in November of last year, 63 per cent of UK adults are considered overweight or obese, and 3.5 million suffer from type 2 diabetes.

‘Too many of us are getting the wrong type of carbs leading to type 2 diabetes,’ Dr van Tulleken said.

‘There are three types of carbohydrates – starch, sugar and fibre,’ he explains.

‘There is lots of starch in potatoes, pasta and bread and lots of sugar in fizzy drinks, sweets and processed foods.

‘Once eaten they get broken down into glucose and get into your bloodstream where you body uses it as energy.

‘But if we eat too many they are turned to fat. Fruits and vegetables contain fibre which releases ­energy very slowly and is good for gut health – as well as not making us fat.’

Dr van Tulleken says we need to be looking out for ‘resistant starch’ in our foods. For example, they can be found in wholegrain loaves, which has also been shown to prevent bowel cancer.

In the program, the scientists warn against eating white bread.

You can minimize this process if you freeze the bread first and then toast it, he says. This converts the sugary starch into resistant starch.