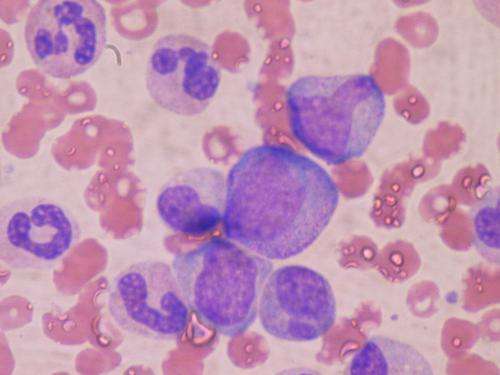 Primary myelofibrosis (PMF), a relatively rare but painful type of bone marrow cancer, disrupts the body’s normal production of blood cells by causing extensive scarring in the bone marrow. Regrettably, few treatment options are available, with most of them being palliative in nature. The only curative treatment is a stem cell transplant, for which few patients are eligible.

A new study by researchers at Boston University School of Medicine (BUSM) led by corresponding author Katya Ravid, DSc, has found that the drugs PXS-LOX_1 and PXS-LOX_2 are capable of slowing PMF’s disease progression in experimental models.

According to Ravid, professor of medicine and biochemistry at BUSM and professor of biology at Boston University, these drugs are unique because they are able to inhibit their target, a protein called lysyl oxidase, with a combination of specificity and potency not seen in previously tested drugs. These current findings build upon previous discoveries and publications by Ravid and her group, showing what specific proteins in the bone marrow cause the scaring effect observed in PMF.

Three experimental models were used for this study: the first group was normal, while the other two had gene alterations that caused them to develop cancer in their bone marrow. The drug PXS-LOX_1 was given to all three groups. While it caused no significant changes in the normal models, it reduced the severity of the bone marrow cancer symptoms in both altered groups. In a separate experiment, PXS-LOX_2 was given to normal set and one of the genetically altered groups. This test resulted in no change in the normal group, but a reduction in the severity of the cancer symptoms of the altered models.

Ravid, believes these findings are significant because they represent a possible novel avenue of treatment for PMF, since there are currently no available drugs that fight the diseased bone marrow matrix proteins in the way that PXS-LOX_1 and PXS-LOX_2 fight it. “Should these drugs eventually be approved for human use, they could help to slow the progression of the cancer and lessen the painful symptoms of the disease.”