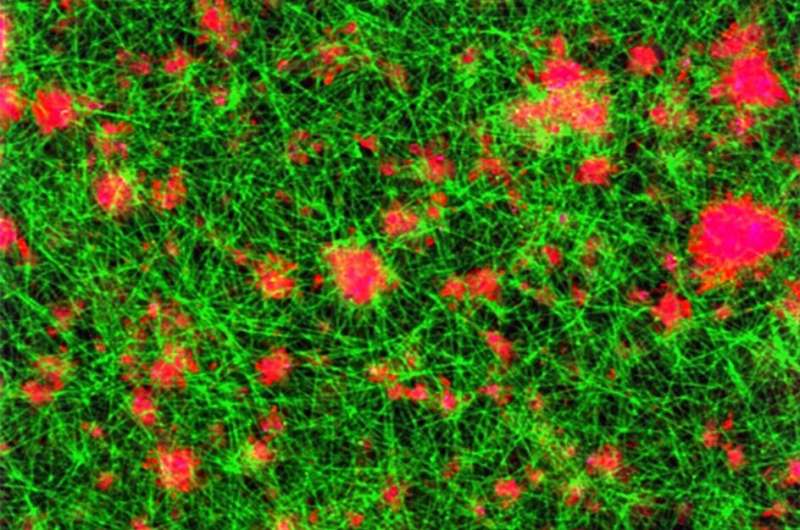 This new effort centers on the creation of next-generation, platelet-mimicking nanoparticles that help generate a protein mesh that acts as a natural netting to stabilize blood clots and help stop bleeding.

If proven safe and efficient in clinical trials, the technology would bolster the scientists’ advances in a decade-long effort to develop and optimize what they call synthetic platelet surrogates.

“This is the next step in artificial-platelet technology and it’s truly a critical advance,” said Anirban Sen Gupta, a professor of biomedical engineering at Case Western Reserve, who led the new research. “We have not only been able to form a plug to reduce bleeding from a traumatic injury, but to also help format fibrin, a protein mesh that secures the plug, further stabilizing the clot.”

The researchers detailed their findings in a paper published this month in the journal Science Translational Medicine.

They reported in the research that the nanoparticles—which the scientists call “platelet-mimicking procoagulant nanoparticles” (PPNs)—helped the clot form faster and stop bleeding in animal models, even when natural platelets were significantly depleted.

Blood has four main components: plasma, red blood cells, white blood cells and platelets. Platelets help the blood-clotting process by quickly gathering at the site of an injury, sticking to the lining of the injured blood vessel, clustering to form a plug and amplifying the formation of fibrin, an insoluble protein mesh that slows bleeding.

Platelet transfusions are routinely used to prevent or treat bleeding complications in trauma, surgery and various clotting disorders. More than 2 million platelet units are needed in the United States every year, according to the Red Cross.

However, natural platelets aren’t always available or portable and have a limited shelf life, prompting research over the last several decades into synthetic alternatives.

These promising results suggest that this new nanoparticle design could further enhance the performance of artificial platelet technologies that Sen Gupta and his research team have been working to develop over the last decade.

The first is a type of “homing” mechanism that helps platelets sense and then stick to a bleeding injury. The second is the ability of platelets to pile up on each other to form a plug, like stacking sandbags as a barrier that stops a flood—in this case bleeding.

“But to ensure that the sandbags stay put under the force of flood, you would need netting to secure them and then peg the netting down so it wouldn’t move,” Sen Gupta said. “Fibrin is this netting, and we have shown that the PPNs can amplify formation of fibrin even when natural platelets are depleted.”

This suggests that PPNs can be used as a viable platelet surrogate to stop bleeding when natural platelet transfusion products are limited.