Alzheimer’s disease and other types of dementia affect more than 55 million people worldwide. But the development of effective treatments and cures is progressing slowly. To some extent, this is because we still don’t understand enough about what causes the disease and drives its progression.

Myself and my colleagues’ most recent work, published in Science Advances, presents a new approach using ideas from other areas of science to analyze data from Alzheimer’s patients. In this way, we’ve been able to build a better understanding of the processes that control the progression of Alzheimer’s disease in the brain.

By way of background, in Alzheimer’s disease and many other neurodegenerative diseases, like Parkinson’s disease, proteins that are normally part of healthy brain cells start sticking together in microscopic clumps. These clumps of protein, called aggregates, form in patients’ brains, killing off brain cells and leading to symptoms such as memory loss.

As the number of aggregates increases, the disease worsens and eventually leads to death, often many years after the first mild symptoms. Several processes likely contribute to the formation of aggregates, but scientists are yet to understand how aggregates form in detail, and which processes are the most important in controlling how quickly they form.

Research into Alzheimer’s disease often uses lab animals, such as mice, to mimic the human disease. This approach can be very useful for investigating specific aspects of the disease, such as the effect of genetic factors. But it’s not a great model for the disease as a whole. This is partly because Alzheimer’s normally takes decades to develop in humans, and lab animals can only be studied over a much shorter timescale.

We’ve been in need of a way to understand the progression of Alzheimer’s disease in the brain using data directly from humans. Until now, this has been difficult, firstly because the data from humans is much more limited than what we can obtain in lab animals (we can modify lab animals, but not humans). It’s also been tricky because the mathematical models to combine and analyze different kinds of human data relevant in this context did not exist.

This is where our work comes in. Using an approach from physical chemistry called chemical kinetics, we were able to work out what happens at the microscopic level in the Alzheimer’s brain. Chemical kinetics allows us to understand the way molecules interact with each other, and how quickly, without having to be able to zoom in and watch at the molecular level.

For example, we can work out how bleach destroys colored molecules simply by looking at how quickly a stain disappears when bleach is applied. With Alzheimer’s disease, it’s much more complex, but we’ve been able to apply the same ideas to determine how aggregates form in an Alzheimer’s brain.

Over more than ten years, we’ve used chemical kinetics in increasingly complex systems, starting in a test tube. Our new study represents the first time we’ve been able to apply these methods to human data, such as from PET scans in patients living with Alzheimer’s, brain microscopy of patients who have died with the disease, and other measurement techniques. 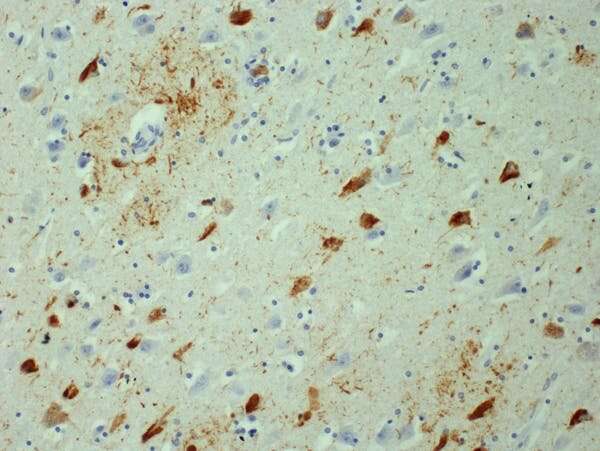 We found that the protein aggregates in brains of Alzheimer’s disease patients multiply exponentially, meaning one aggregate produces two aggregates after a certain period of time, which then, after the same amount of time has passed again, produce four aggregates, and so on.

As we’ve all experienced during the COVID pandemic, exponential growth can appear deceptively slow at first, and then result in a seemingly sudden increase. In Alzheimer’s disease, this explains why patients experience no symptoms or mild symptoms while aggregates initially build up, followed by much more rapid progression and worsening of symptoms.

One encouraging finding from our work is that the human brain is actually quite good at slowing down the multiplication of aggregates. We found it takes around five years to double the amount of aggregates, which is over ten times longer than in lab animals or the test tube. The reason for this likely relates to many factors, such as the presence of molecules that slow down different steps of aggregation in the brain. It’s all part of our ongoing research.

Another process scientists are very interested in is the spreading of aggregates from one region of the brain to another. We also investigated how important this process is in driving the progression of disease and found, surprisingly, that it appears to have little effect on the speed of progression. While spreading may influence the location of the initial aggregates to some degree, we found the main factor that controls the speed of progression is the multiplication of aggregates in individual brain regions.

We can think about this by returning to COVID-19. Stopping travel between countries is not a particularly effective way to stem cases when there are already significant numbers of infected people in the original country. We found that, in the same way, stopping spreading of aggregates between brain regions is unlikely to help slow down Alzheimer’s once it’s started.