Quorn recalls 6,500 packs of gluten-free veggie burgers bought in Waitrose and Morrisons because they have gluten in them

Quorn is recalling thousands of its frozen gluten-free veggie burgers because they have gluten in them.

The vegetarian food company has to refund customers for the burgers because they pose a health risk to people with a gluten allergy or intolerance.

The gluten-free burgers come in packs of two and cost £2.49 in Waitrose and Morrisons, and some 6,500 packs are being recalled by the company.

Burgers containing gluten have been packaged in gluten-free boxes, Quorn says, which has been blamed on ‘human error’.

People who bought the burgers with a best before date of November 30, 2019 are warned by the Food Standards Agency to take them back to the supermarket.

The company says ‘the safety of our customers is our number one priority’ – and no other products have been affected. 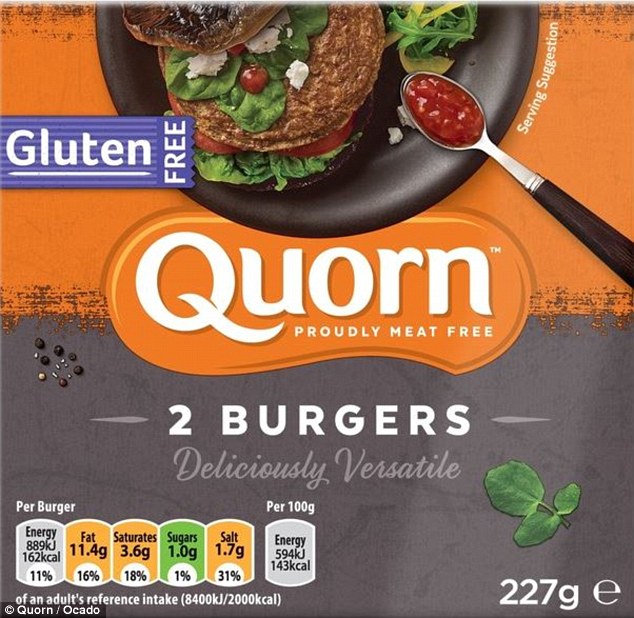 Some 6,500 packs of Quorn’s gluten-free vegetarian burgers have been recalled by the company because they do in fact contain gluten, but there is no warning on the label

Shoppers with a two-pack of gluten-free burgers should check the bar codes and batch codes on their food to see if they need to take it back, Quorn warned on Wednesday.

The company says some of the burgers do in fact contain gluten, but there is no warning on the packaging.

Gluten can cause reactions in those with allergies or worsen symptoms such as diarrhoea or vomiting among the one per cent of people who have coeliac disease.

‘The safety and wellbeing of our customers is our number one priority,’ a Quorn spokesperson said.

‘Which is why we initiated this recall as soon as it was confirmed that Quorn burgers containing gluten had been packed in gluten-free packaging.

Supermarkets including Tesco, Sainsbury’s, Waitrose and Aldi were recently forced to recall more than 50 frozen products over fears they may be contaminated with listeria.

Listeria is a bacteria which can cause a fever, aches and pains, feeling sick or vomiting and diarrhoea.

Listeria is a particular threat to the elderly, pregnant women and babies.

The European Food Safety Authority (EFSA) said earlier this month: ‘New cases could still emerge due to the long incubation period of listeriosis of up to 70 days; the long shelf-life of frozen corn products; and the consumption of corn bought before the recalls.’

The contamination was traced back to a freezing plant in Hungary, which the EFSA believes caused the bacteria to make people ill in the UK, Austria, Denmark, Finland and Sweden.

‘This was the result of human error, and we would like to assure our customers that no other Quorn products are affected.

‘Customers with coeliac disease or gluten intolerance are advised not to consume the product and should return it to their retailer for a full refund.’

One per cent of people have coeliac disease

One in every 100 people are thought to have coeliac disease, an autoimmune condition in which the body reacts badly to gluten, which is most commonly found in wheat.

The condition can cause vomiting, diarrhoea, fatigue, constipation and stomach cramps, and is not curable – sufferers have to avoid eating gluten to stop symptoms.

‘These are a possible health risk for anyone with an allergy’

The Food Standards Agency added: ‘This product contains gluten making it a possible health risk for anyone with an allergy or intolerance to gluten.

‘If you have bought the above product and have an allergy or intolerance to gluten do not eat it. Instead return it to the store from where it was bought for a full refund.

‘Quorn is recalling the above product from customers and has contacted the relevant allergy support organisations, who will tell their members about the recall.

‘No other Quorn products are known to be affected.’