More than 18 months into the pandemic, we’re still hunting for effective antiviral treatments for COVID—medicines that target the coronavirus itself and stop it from developing in the body.

So far we have only a handful of options. Remdesivir has been authorized for use, but the latest research shows it doesn’t improve outcomes for COVID patients, and so the World Health Organization has recommended it not be used. A new alternative, molnupiravir, will soon be available, but demand will be high. It could also be very expensive for some patients.

So if we need alternative antivirals, where will we find them? Possibly in nature. It’s an outstanding hub for valuable natural compounds, and provided us with one of the most important scientific discoveries in history: penicillin, the first naturally occurring antibiotic to be used therapeutically. Thanks to this drug, various diseases caused by bacteria are no longer life threatening.

There’s a very good chance that researchers could discover a highly effective antiviral agent in nature too, if they were able to test all of the substances within the natural environment. This, however, would be an enormous task. So we need to find shortcuts—which is something I and my colleagues have been working on.

Finding medicines under the waves

The marine environment in particular is a treasure trove for potential new medicines. Many products derived from marine organisms have been approved by the US Food and Drug Administration for medical use, for example, and many others are currently in different stages of clinical trials. However, the sea and its natural products are still under-investigated as far as medicines are concerned.

One set of substances that are particularly interesting are marine sulphated polysaccharides, or MSPs. These are a type of carbohydrate that contain sulfur, and are mainly found in the cell walls of marine algae or seaweeds. They’re also less commonly found in some fish skins and in mangrove plants.

They’re significant because they’ve shown that they can inhibit many disease-causing viruses, such as herpes simplex virus, HIV, chikungunya virus, cytomegalovirus, influenza and hepatitis virus.

But even if we know MSPs in general are worth investigating, discovering which ones specifically are effective against SARS-CoV-2, the virus that causes COVID, would be very time and resource-consuming using traditional laboratory testing. 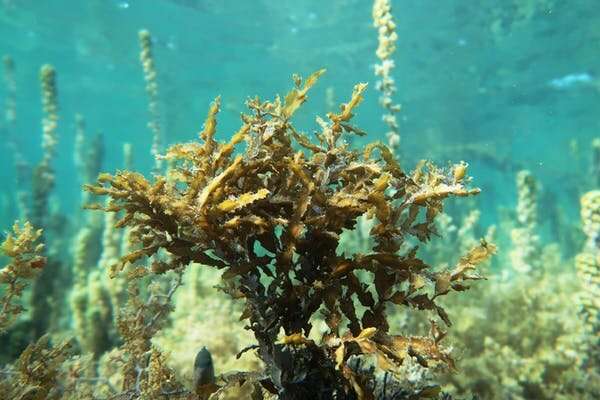 To get around this, my colleagues and I used computer-assisted methods to predict how MSPs would behave with the coronavirus, and so filter out those unlikely to work against it. Many drugs currently on the market were developed with this kind of assistance, including the flu treatment zanamivir and the HIV drugs nelfinavir and saquinavir.

First, we looked at past research, focusing on papers that mentioned MSPs having an effect against different viruses. We looked at around 80 papers, spanning 25 years, and came up with a shortlist of 45 substances that might potentially have an antiviral effect and so be worth investigating further.

We then built 3D computer-generated versions of these molecules, together with the spike protein that covers the outside of the coronavirus, which is what the virus uses to get inside cells. Using these computer models, we then simulated how well each MSP would bind to the spike protein. This process—of using computer simulations to test binding—is known as “molecular docking”.

Knowing that we should focus interactions with the spike protein wasn’t just a guess. A substance chemically similar to the MSPs we were looking at, called heparin, had recently shown promise against SARS-CoV-2 by binding to its spike proteins and stopping it from infecting cells. (The issue with heparin is that it’s a blood thinner, and so it’s not highly suitable as a COVID medicine.)

If we could find MSPs that bound to the virus in the same way as heparin, then we’d have a list of substances that could plausibly have the same antiviral effect as it too. And so, we ran computer simulations for all of our MSPs.

Of the 45 MSPs we shortlisted, nine showed the same binding activity as heparin, suggesting they would have real promise as avenues for future drug development. And while some of these had already been flagged as having potential use against SARS-CoV-2—such as carrageenan, an algae product already used in nasal sprays and lozenges for the common cold—crucially, five hadn’t.