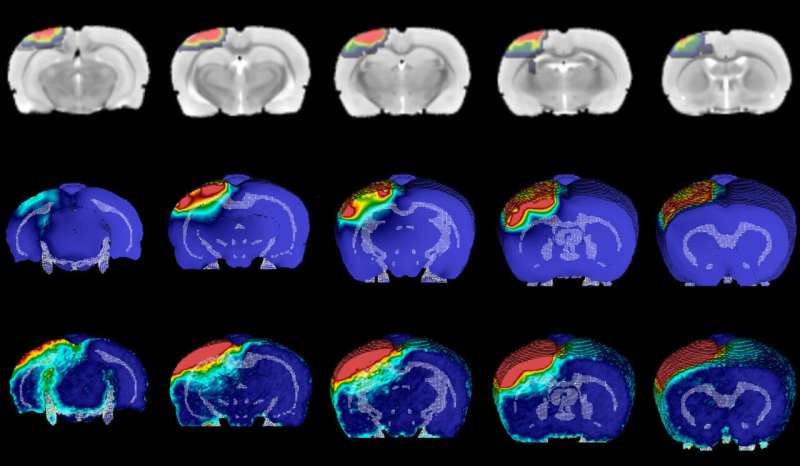 Researchers have shown how forces acting on the brain during traumatic injury are linked to damage seen years after the initial trauma.

The findings, from a cross-disciplinary team at Imperial College London, could be used to predict the severity of brain injuries and help design more effective helmets for a range of sports and activities.

Traumatic brain injury (TBI) results from a sudden impact or jolt to the head, such as during a road traffic accident or bomb blast, or during sports like rugby and American football. Immediate impacts of TBI can include bleeding and unconsciousness, but it can also result in changes to regions of the brain that lead to symptoms like memory loss, mood and personality changes, and lack of concentration, sometimes many years after the initial injury.

However, the link between the mechanical forces that act on the brain during TBI and the resulting long-term changes is poorly understood.

Now, researchers from the Faculties of Engineering and Medicine at Imperial, including the teams of Dr. Mazdak Ghajari, Professor David Sharp and Dr. Magdalena Sastre, have shown a clear link between the forces acting on the brain during TBI and its associated long-term changes. The research, which is published in Brain, combined a computational model of brain injury with experimental studies on rat brains.

Dr. Mazdak Ghajari, from the Dyson School of Design Engineering at Imperial, said: “The initial damage during a traumatic brain injury takes only milliseconds to occur, but it triggers many changes that result in ongoing effects which can be felt years later. Understanding the link between the two is crucial for predicting who is at risk for long-term damage, and how protection may be better designed to prevent this damage.” 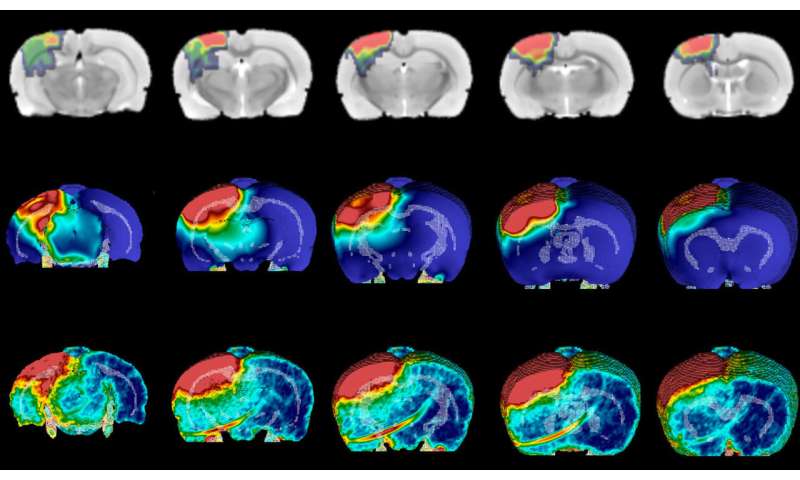 Now, they have tested this modeling approach to see if it can accurately predict the pattern of white matter damage in rats given mild or moderate TBI. They simulated the rats’ brains during injury, revealing the location and duration of mechanical forces linked to damage. Using a precise experimental model, this damage was induced in the rat brain and followed up after several weeks, which correlates to years of changes in a human brain.

They found that the effect of shear stresses on the white matter helped to predict the location of long-term damage. Shear stresses push two parts of the same object, in this case the brain, in different directions.

Dr. Magdalena Sastre, from the Department of Brain Sciences at Imperial, said: “The shear stresses on the brain correlated with markers of brain inflammation, which is associated with memory loss and other future functional cognitive alterations.”

The brain is jelly-like in consistency, so when it received a jolt, it shakes in a similar way, causing shear between adjacent parts. The intensity of the shear at different locations caused by different impacts, for example what angle they come from, predicts where the most severe white matter damage will occur. This could potentially help doctors predict the likely long-term effects in patients who have suffered a TBI.

Dr. Ghajari said: “Different types of injuries will cause different kinds of shear. With this new model we can now more accurately predict which injuries will cause severe, long-term damage, and potentially avert it. For example, motorbike accidents involve a lot of rotational movement, which causes lots of shear. We are studying dozens of bike helmets to see which best protect against excess rotation.”

Now the team’s computational model has been validated in real rat brains, they can use it to ask a range of research questions by modeling different kinds of TBI.

Professor David Sharp, also from the Department of Brain Sciences, added: “We are also looking at how the type of impacts experienced by American football players affects whether they lose consciousness, and whether new helmet designs might protect soldiers from the effects of blast waves following explosions. These types of studies can also help explain whether repeated small impacts, such as heading the ball in football, could lead to similar long-term brain injury.”