The antifungal drug itraconazole – also known as Sporanox –  may kill off tumour cells which cause people’s cancer to spread or to come back after treatment.

Scientists at Cancer Research UK made the promising discovery in lab experiments on mice, and now hope to start human trials.

They found the drug destroys cancer cells which are resistant to chemotherapy, and wipes out ‘sleeping’ cells which make the disease return after treatment.

Bowel cancer is the fourth most common form in the UK and just under 60 per cent of patients survive for five years after diagnosis.

Researchers say if the treatment is successful in humans it could be used to target dormant cancer cells – the ‘sleeping’ cells – in other types of tumours. 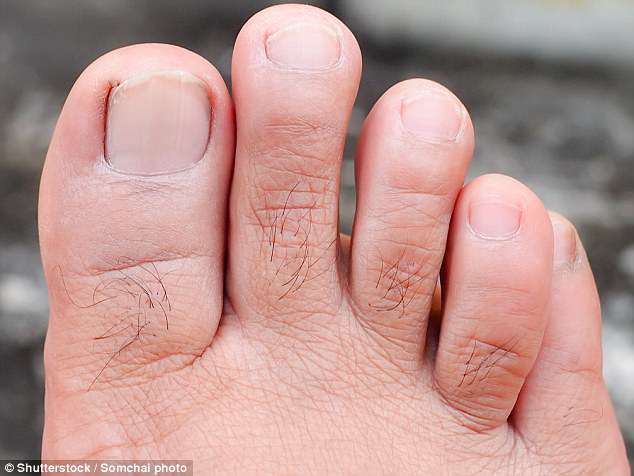 Itraconazole, also known as Sporanox, is commonly used to treat fungal nail infections, but scientists say it could stop bowel cancer from spreading or coming back after treatment

One of the study’s authors, Dr Simon Buczacki, of Cancer Research UK Cambridge Institute, said: ‘One of the biggest challenges in treating any cancer is the diversity of different cells within the same tumour.

‘We have targeted a type of cell that lies asleep within bowel tumours, remaining unresponsive to treatment and putting the patient at risk of their cancer coming back.’

In the study Dr Buczacki and his colleagues analysed the dormant tumour cells, which are resistant to chemotherapy because it targets actively growing cells.

So even if it looks like a treatment has been effective, some of these cells can later awaken after treatment has finished and cause the tumour to regrow.

By testing drugs on bowel tumours grown from mice with the cancer, researchers found itraconazole causes tumours to collapse.

Bowel, or colorectal, cancer is the fourth most common in the UK after breast, prostate and lung, and there are 41,000 cases diagnosed each year.

It affects the colon and rectum and symptoms include bleeding, unexplained weight loss and abdominal pain.

HOW THIS FUNGAL NAIL TREATMENT COULD KILL CANCER CELLS

In their study, scientists at the Cancer Research UK Cambridge Institute identified two pathways – groups of molecules which control a cell’s functions – which cause cancer cells to become dormant.

The two the researchers singled out are called the Wnt and hedgehog pathways.

While testing the effect of anti-fungal medicine itraconazole, they found for the first time that it blocks signals from the Wnt pathway, which has been shown to be responsible for the growth and spread of various different cancers.

Blocking the signals caused the tumours to collapse and stop growing, and the dormant cells – which can make a cancer come back after treatment – to disappear.

Originally thought to be an old person’s disease, its incidence among younger people is rising because of unhealthy diets.

The condition kills more than 16,000 people per year.

Sporanox is an oral drug which has been routinely prescribed for fungal nail infections for years.

But it cannot be taken by those with a history of heart disease, stroke, kidney or liver disease, cystic fibrosis and some breathing disorders.

‘It slams on an irreversible stop button’

Dr Buczacki said: ‘What is interesting is this drug seems to kick both dormant and non-dormant cells into action.

WHAT IS BOWEL CANCER?

Bowel, or colorectal, cancer affects the large bowel, which is made up of the colon and rectum.

Most cases have no clear cause, however, people are more at risk if they:

More than nine out of 10 people with stage one bowel cancer survive five years or more after their diagnosis.

This drops significantly if it is diagnosed in later stages.

According to Bowel Cancer UK figures, more than 41,200 people are diagnosed with bowel cancer every year in the UK.

It affects around 40 per 100,000 adults per year in the US, according to the National Cancer Institute.

‘It forces cells back into a short cycle of growth before slamming on an irreversible stop button, entering a permanent standstill that is known as senescence.’

Senescence is the process by which cells stop dividing – most human cells can only reproduce a limited number of times.

The process protects against cancer because the more often cells divide, the greater the chance they will accumulate errors.

Cellular senescence helps keep humans predominantly free of cancer in the first half of their lives.

Itraconazole killed the dormant cells by blocking signals from a particular biological interaction called Wnt, which is responsible for the growth and spread of many different cancers.

If this drug works in humans it may also help to treat other types of cancer.

The researchers, who published their findings in the Journal of Experimental Medicine, hope to set up a clinical trial to test the drug on patients with hard-to-treat advanced bowel cancer.

They also intend to investigate whether the drug could be more effective in combination with other treatments like chemotherapy.

Professor Greg Hannon, director of the Cancer Research UK Cambridge Institute, added: ‘This innovative study has taken a step toward addressing one of the biggest challenges in cancer research.

‘Tumours are made up of many different types of cancer cells, which can evolve separately and respond to treatments differently.

‘The presence of drug-resistant, dormant tumour cells is a problem in many types of cancer.

‘If we find ways to target these cells in bowel cancer, it might provide insights into tackling the problem of dormant tumour cells more broadly.’