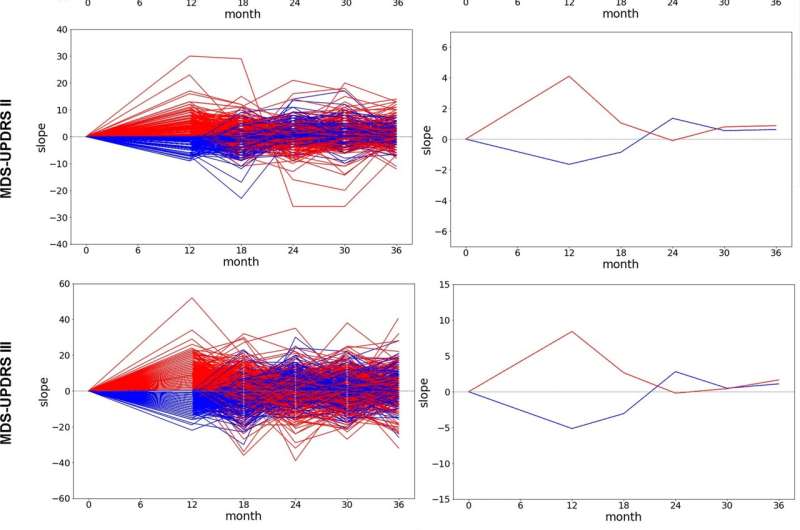 Testing whether a new drug impacts the progression of Parkinson’s disease takes years, in part because the disease often advances so slowly. Many Parkinson’s patients don’t have any worsening of their symptoms over the course of a typical clinical trial, even without treatment.

Now, Scripps Research scientists have developed a tool that analyzes Parkinson’s disease patients’ genetic and clinical data to predict who is most likely to rapidly progress. The approach, described in npj Parkinson’s Disease, will let clinical researchers select the most at-risk patients and design shorter, more powerful trials to assess Parkinson’s drugs, they say.

“If clinicians are able to enroll in trials only those patients predicted to progress, they can get much faster results and move this field along more quickly,” says senior author Ali Torkamani, Ph.D., professor and director of Genomics and Genome Informatics at the Scripps Research Translational Institute.

Parkinson’s disease is a progressive disorder of the nervous system and affects about one million people in the United States. The earliest symptoms are often barely noticeable tremors, and over the course of many years the disease progresses, eventually impacting movement, posture, facial expressions, speech and eating, as well as causing pain and dementia.

However, the order and speed at which these symptoms worsen varies greatly between people. Over a single year, for instance, many patients won’t get worse, making it difficult and time-consuming to study the effectiveness of drugs at slowing this progression.

Torkamani, along with Scripps Research colleagues and collaborators at Takeda—who are developing investigational Parkinson’s Disease treatments—set out to better predict this short-term progression in patients considered for inclusion in clinical studies to slow down this disease.

They analyzed the progression over 12, 24 and 36 months of patients enrolled in two existing cohorts—the Parkinson’s Progression Markers Initiative and the Parkinson’s Disease Biomarkers Program. In all, the team used data including genetics, clinical exam information, brain scans and treatments, on 879 patients.

Overall, 529 patients were found to be “progressors” over the first 12 months of the study, with their symptoms significantly worsening, while 350 were grouped as “non-progressors.” Torkamani’s group used a machine learning approach to develop a model that could predict, with 77% accuracy, which group patients belonged to.

“This model worked by combining different aspects of comprehensive disease profiling,” says Torkamani. “Genetic risk factors were the most powerful predictor, but other factors were important to include as well.”

Some of the strongest signals, he says, included whether a patient had a mutation in LRRK2—this known risk factor for Parkinson’s disease makes patients more likely to develop early onset disease, but then their symptoms progress more slowly.

For now, the model doesn’t have clinical value for individual patients, since there are no drugs that have been shown to slow the progression of Parkinson’s. However, the researchers hope that being able to choose “progressors” for clinical trials makes it easier and faster to pinpoint these kinds of drugs as the field moves forward.

“Right now, these clinical trials are large and tend to take two to three years,” says Torkamani. “We’re hoping to empower smaller trials that are on the order of a one-year time frame.”