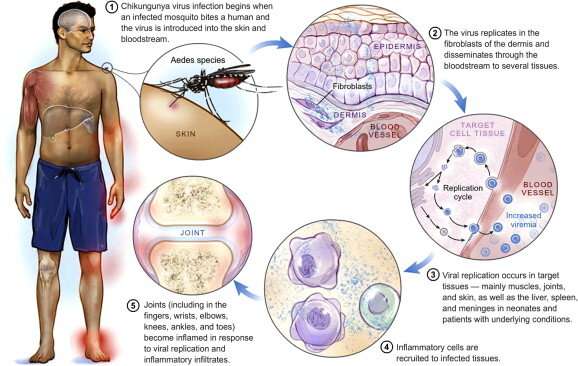 Evotec, a drug company headquartered in Hamburg, Germany, has begun a phase 1 clinical trial of a monoclonal antibody against the chikungunya virus that was identified at Vanderbilt University Medical Center.

This is the second monoclonal antibody against the debilitating tropical viral infection isolated in the lab of James Crowe Jr., MD, director of the Vanderbilt Vaccine Center, to enter clinical trials.

In September 2019 Massachusetts-based Moderna Inc. announced positive results from a phase 1 study in healthy adults of another chikungunya antibody isolated at VUMC. Moderna also developed one of three vaccines against the COVID-19 virus that now are being distributed in the United States.

Chikungunya is a mosquito-borne viral disease that causes fever and severe joint and muscle pain as well as headaches, nausea, fatigue and rashes. Currently there is no targeted therapy for the disease, endemic in the Americas and Caribbean islands, but which is spreading outside the tropics.

The neutralizing antibody developed by Evotec, EVT894, was isolated from the blood of a patient previously infected by the chikungunya virus.

“We believe it holds great promise to be become an effective therapeutic and prophylactic treatment option and is thus expected to make a real difference for people affected by the disease,” Cord Dohrmann, Ph.D., Evotec’s chief scientific officer, said in a news release.

“We’re thrilled to see an antibody we discovered moving forward in the clinic,” said Crowe, the Ann Scott Carell Professor in the Departments of Pediatrics and Pathology, Microbiology & Immunology at VUMC. “A major goal of the Vanderbilt Vaccine Center is to translate our basic science discoveries into medicines that can improve human health.”

During the past 25 years, Crowe and his colleagues have pioneered techniques for isolating human monoclonal antibodies that can neutralize—with laser-like focus—a host of pathogenic viruses including influenza, HIV, respiratory syncytial virus (RSV), Zika and the highly lethal Marburg and Ebola viruses, which cause severe hemorrhagic fever.

In October 2019 the global biopharmaceutical company AstraZeneca announced it was advancing into phase 3 clinical trials an investigational COVID-19 therapy consisting of two long-acting antibodies against SARS-CoV-2 discovered in the Vanderbilt Vaccine Center and optimized by AstraZeneca.