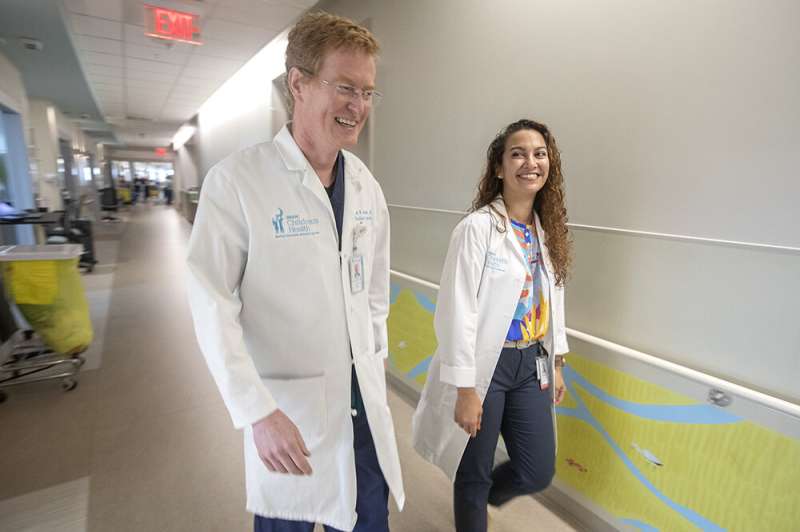 Race was already known to matter when it came to health outcomes for infants with congenital heart disease (CHD), the most common birth defect, affecting 1 in 100 live births. In the first year of life, African Americans are 1.4 times more likely and Hispanics are 1.7 times more likely to die due to CHD than Whites. However, no one knew why race affected those outcomes.

“We’ve known for a couple decades now that outcomes are worse in minority groups, compared with their White counterparts,” said John Costello, M.D., pediatric cardiologist and director of research for the MUSC Children’s Health Pediatric & Congenital Heart Center at MUSC Shawn Jenkins Children’s Hospital. “But it really has never been understood why these differences in outcomes exist.”

There is now a partial answer to that question, thanks to a joint effort between Costello; MUSC Children’s Health pediatric cardiology fellow Stephanie Santana, M.D.; and their colleagues at the University of California San Francisco (UCSF) and Northwestern University. They report in the Journal of Pediatrics that the state of the mother’s health during pregnancy can partially explain the racial differences in outcomes of CHD patients.

As a first-generation Hispanic physician, Santana has always been passionate about health disparities. At MUSC, she became interested in why CHD outcomes are worse in infants of color. After discussing these interests with Costello, the two reached out to collaborators at UCSF and Northwestern. Together, they tapped into a large California administrative dataset that allowed them to make connections between maternal health and outcomes for infants with CHD. An earlier conference presentation about this work led to Santana receiving the 2021 American Heart Association’s Outstanding Research Award in Pediatric Cardiology.

The recently published study is unique in that it not only assessed the health of infants with CHD but also that of their mothers. This maternal component was important to include, as CHD begins during development when the baby and mother are interconnected in the wombs.

“The journey of a child or adolescent or patient with congenital heart disease doesn’t start at birth,” said Santana. “It starts in that mother-baby unit and all the influences and factors that negatively or positively impact that environment.”

This investigation assessed the records of over 8,000 infants and their mothers from diverse populations. It found that placental and metabolic syndromes in the mother during pregnancy explained 25% of the disparity in CHD outcomes in Blacks and 18% in Hispanics. Among the conditions associated with these syndromes are high blood pressure, obesity, diabetes and high cholesterol levels.

The findings are exciting, according to Santana, because these conditions can be treated.

Armed with the knowledge from this study, she believes doctors can modify treatment plans for at-risk mothers. For example, they can provide education or preventive medications. While there is still a long way to go to address the racial disparities in CHD, Santana thinks identifying one of the factors accounting for them gives hope for improved outcomes in the future.