Parents warned as teenage girls use paracetamol, booze and prescription pills to poison themselves

A growing number of teenage girls are self-harming by overdosing on painkillers, prescription pills and alcohol, research has revealed.

Parents have been warned to safely store medicines because common household items like paracetamol, aspirin and alcohol are all often seen in poisonings.

Almost 40 per cent of cases involve paracetamol, and the number of 10 to 18-year-old girls who have overdosed on it has risen sharply since 2011.

Poisonings involving opioids such as codeine and tramadol have risen fivefold since the research began in 1998.

Girls and young women poisoning themselves with over-the-counter and prescription meds are on the rise, despite rates among young men staying comparatively stable.

The findings come after figures revealed the number of girls admitted to hospital after self-harming has almost doubled since 1997. 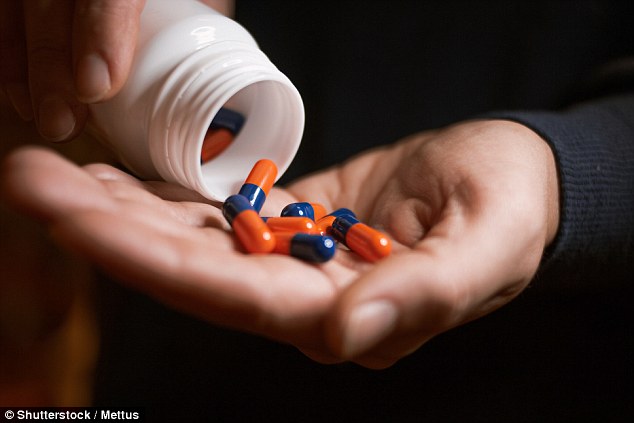 Researchers from the University of Nottingham studied trends in self-harm among 10 to 24-year-olds in England between 1998 and 2014.

Their study looked at over a million patient records and found 40,333 incidents of young people seen by medics after poisoning themselves.

Scientists said poisonings make up between 77 and 91 per cent of all self-harming incidents which are so serious they need medical attention.

Only 7.5 per cent of the poisonings were accidental, and in almost a third of cases (31.8 per cent) the patient had taken more than one drug at once.

EXAM PRESSURE AND SOCIAL MEDIA MAY CONTRIBUTE TO SELF-HARM

Twice the number of girls are admitted to hospital for self-harm than 20 years ago.

Psychiatrists believe a combination of academic pressures and body-image issues brought on by social media could be to blame.

Vice-chairman of the child and adolescent faculty at the Royal College of Psychiatrists, Jon Goldin, told the Times: ‘I think there are a range of factors putting pressure on young children.

‘Academic pressures, exam pressures, social media… with fear of missing out and comparing yourself unfavourably to images you see online.’

He added that girls may be more ‘sensitive’ to the pressures than boys.

The NSPCC said the statistics were ‘heart-breaking’ and ‘many children are being driven to self-harm as a way of dealing with the pressures and demands of modern-day life.’

And they warned parents the most commonly used substances are those which can be found lying around in a normal home – paracetamol and alcohol are the biggest dangers, as well as antidepressants and prescription painkillers.

And the study added children who live in deprived households are more at risk.

‘They commonly include over-the-counter medications that may be easily accessible within households or which young people may buy themselves.’

The team’s findings were published in the British Journal of General Practice.

They come after it was revealed in August that the number of girls admitted to hospital after harming themselves has almost doubled since 1997.

The NSPCC said the figures were ‘heartbreaking’ and blamed modern-day life.

Jon Goldin, of the Royal College of Psychiatrists, told the Times: ‘I think there are a range of factors putting pressure on young children.

‘Academic pressures, exam pressures, social media… with fear of missing out and comparing yourself unfavourably to images you see online.’