Battling the final stages of a terminal disease is painful.

Doctors have ways to manage the pain that will keep the patient lucid until the end, but for many their agony too unbearable to handle.

This is has given rise to a growing and controversial movement across the US, and other parts of the world, to legalize physician-assisted suicide, which ends a person’s life before their natural death.

However, while the ethical debate over euthanasia rages on, doctors in all 50 states are legally carrying out a common form of therapy that can offer relatively similar effects.

It is known as palliative sedation, in which people who are terminally ill are given medication that will make them unconscious, sometimes enough that they pass away in this state, or remain in a ‘coma’ until their natural death.

Daily Mail Online spoke to a palliative care specialist about the difference between this form of treatment and physician-assisted suicide and what it takes for a medical professional to resort to it. 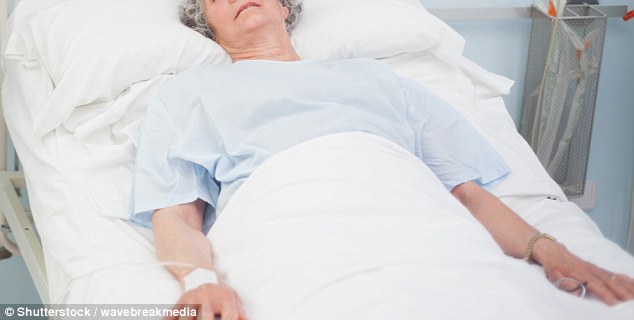 Palliative sedation is when a patient who is terminally is given enough sedatives to render them unconscious but is controversial, with many likening it to physician-assisted suicide (file image)

Palliative sedation is when a patient who is terminally is given enough sedatives to render them unconscious.

The goal is to relieve suffering, although there are cases in which the patient dies and does not ever regain consciousness.

Some liken it to physician-assisted suicide which is when a doctor ‘knowingly and intentionally’ prescribes or supplies lethal doses of drugs to a patient with six months or less to live.

But it faces strong opposition from several religious groups and from professionals who fear it will expand to marginalized groups including the disabled and those with chronic diseases.

Some consider palliative sedation to be similar or say it’s no different that intentionally ending a person’s life – despite the fact that it’s legal in all 50 states.

‘Palliative sedation raises eyebrows in some people because whenever you sedate someone, there’s the idea that we’re medicating people to death or we must be hastening their death,’ Dr Anthony Back, co-director of the University of Washington’s Cambia Palliative Care Center of Excellence, told Daily Mail Online.

‘It’s one of the last things we talk about [with patients]. It’s often a decision made in last hours or days of life, but it can help provide relief for those who have intolerable suffering.

‘It’s not the same as physician-assisted suicide, there is a difference.’

Dr Back explained that there is currently no evidence that palliative sedation shortens people’s lives nor have many studies been conducted on the matter.

But he says there are practices medical practitioners can follow so that it doesn’t look like patients are simply receiving more and more sedation.

‘There are ways to examine them, see how arousable they are not when getting routine care – do they groan or not respond at all?’ he said.

Additionally, creating policies that establish guidelines are another way to make people more comfortable speaking about it.

In Washington state, where Dr Back practices, patients who wish to receive palliative sedation must provide two verbal requests to their doctor and sign a consent form as well as be healthy enough to take the drugs on their own.

‘Palliative care specialists need to see that the patient has had a consultation and use the consultation to become involved in administering and monitoring the sedation,’ he said.

‘It also helps to make sure that discussions are being had with the family, telling them this is what it is, what to expect.’

Dr Back elaborated that by clinician staff seeing the process being done in a consistent way, it can reassure them when it comes to administering care.

While there is no way to tell if the patient’s suffering is truly reduced by palliative sedation, Dr Back says there is one marker physicians can check.

‘We don’t know what someone’s inner experience is when sedated but patients often experience retrograde amnesia where they don’t remember much,’ he said.

‘It’s a similar kind of sedation as seen with Versed, which often used for colonoscopies – and for palliative care.’

Dr Back adds that the kind of patient eligible for this is someone who is in so much pain that they can’t stand the thought of being conscious anymore.

‘I often ask: “Have we gone through every single thing we could do to relieve the suffering?”‘ he said.

‘I’ve come across people who feel they’re being punished by God for something. So if I get that gist, I ask: “Would you be willing to talk to a priest about it?” We want to exhaust every possible resource.

‘If I feel I’ve used every resource I could and there is not much time left, then we need to talk to the patient about palliative sedation means and about steps such as making phone calls and saying goodbye to family.’