Dying cancer patients get better hospice care than those with dementia or Parkinson’s, finds study that also reveals the young receive more treatment

Cancer patients receive roughly twice the palliative care time that other incurable diseases receive, according to a new study.

Patients with progressive and incurable diseases like dementia, liver failure, Parkinson’s and strokes typically spend around half as much time receiving end-of-life care in hospices than patients with cancer.

Leeds University researchers analysed information about 42,000 deaths in the UK in 2015 and found patients with cancer were typically referred to hospices 53 days before their deaths, compared to 27 days for other terminal patients.

A February survey among NHS nurses found they felt the NHS was under too much pressure to provide the care that dying patients needed.

For instance, almost all nurses – 94 per cent – said they have witnessed a patient die in hospital who had made a request to die at home. 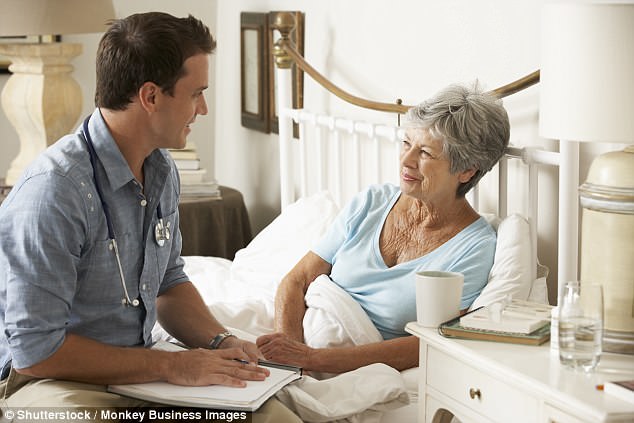 Dying patients do not get the best palliative care unless they have cancer, a study suggested

Patients not being referred for palliative care

Researchers found older patients aged over 75 tended to receive less palliative care, spending an average of 39 days at a hospice compared to 78 days for under 50s.

And there is a North-South divide in end-of-life care, with patients in the South and Midlands spending an average of 55 days in hospices compared to 35 days for patients in the North.

Previous trials have shown patients with terminal illnesses benefit most when they spend three to six months in a hospice before their death.

But patients can usually only be referred to hospices by GPs, hospitals, community nurse specialists or social workers.

Lead author, Dr Matthew Allsop, said: ‘Palliative care is for any person diagnosed with a terminal illness, not just those with cancer. It aims to help patients and their families achieve the best quality of life through treating or managing physical symptoms, and helping with any psychological, social or spiritual needs.

‘We know that people have a better quality of life if they are referred for palliative care early, but our findings suggest that this is not happening in a majority of cases.

‘A large number of patients are accessing palliative care in the last weeks of life.’

Co-author of the study, Dr Sarah Russell, of charity Hospice UK, said: ‘Despite increasing evidence about the benefits of early referrals for hospice care, our research shows that many people who could benefit from inpatient and community hospice care are not being referred early in their illness.

‘Palliative and hospice care is not just for people in the last days of life, it is there to provide support for anyone with life-limiting illnesses, and their families, to help them live well until they die.’

The authors of the study, published in the journal Palliative Medicine, suggested health professionals should consider making earlier referrals to hospices for people with dementia and other conditions. 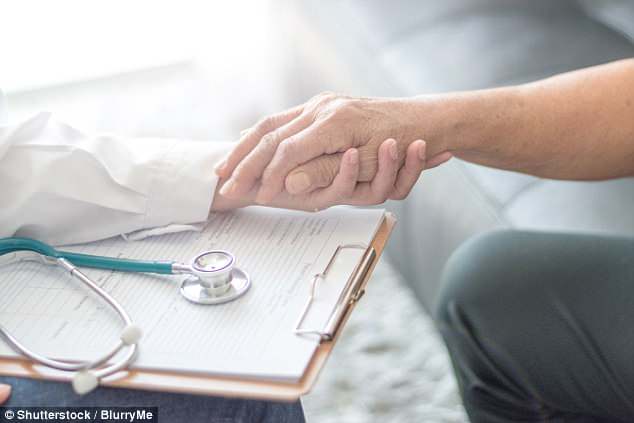 Many people fear death partly because of the perception they might suffer increasing pain and other awful symptoms the nearer it gets.

There is often the belief palliative care may not alleviate such pain, leaving many people to die excruciating deaths.

But an excruciating death is extremely rare.

The evidence about palliative care is that pain and other symptoms, such as fatigue, insomnia and breathing issues, actually improve as people move closer to death.

More than 85 percent of palliative care patients have no severe symptoms by the time they die.

Evidence from the Australian Palliative Care Outcomes Collaboration (PCOC) at the University of Wallongong shows that there has been a statistically significant improvement over the last decade in pain and other end-of-life symptoms.

Worldwide an estimated 40 million people are in need of palliative care, 78 percent of whom live in low and middle-income countries.

Only about 14 percent of people who need palliative care currently receive it.

NHS under too much pressure to perform

A survey of NHS nurses taken in February found they felt that the NHS is under too much pressure to provide suitable care for dying patients.

Patients are being left stranded in hospitals rather than being allowed to die at home or in hospices, the survey claims.

Others are dying alone because staff are too stretched to spend time with them, the report found.

Almost all nurses – 94 per cent – say they have witnessed patients dying in hospital when they had expressed the desire to die at home, in a hospice or care home setting.

The survey of more than 600 nurses, conducted by Marie Curie and Nursing Standard journal, found most nursing staff believe it is now a ‘common occurrence’.

One nurse said patients were dying in hospital because ‘fast track services to get patients home where they want to die [are] not very fast’.

Carole Walford, chief clinical officer at Hospice UK said: ‘Nurses continue to face huge barriers. Many hospices are already reaching out to hospitals to work together to improve end-of-life care in acute settings.’

Following the worst flu season in seven years, nurses were also worried about the impact of this year’s winter pressures on end-of-life care.

Almost eight in ten feel the winter crisis had a negative effect on the quality of care they are able to provide to dying patients.