What should you order at Starbucks? Nutritionists reveal what they would pick for a drink, breakfast and lunch – and what they always avoid

Whether we’re shopping at the mall, running to catch a flight at the airport, or just walking down the street, you’re bound to find one of those green-and-white mermaid logos.

And, in a pinch, it can be a great place to stop for a morning coffee or to grab a quick bite to eat.

But among the glass stand filled with pastries and sandwiches, and the seemingly endless menu of drink options, it can be hard to know what will fill you up and what will leave you feeling hungry an hour later. 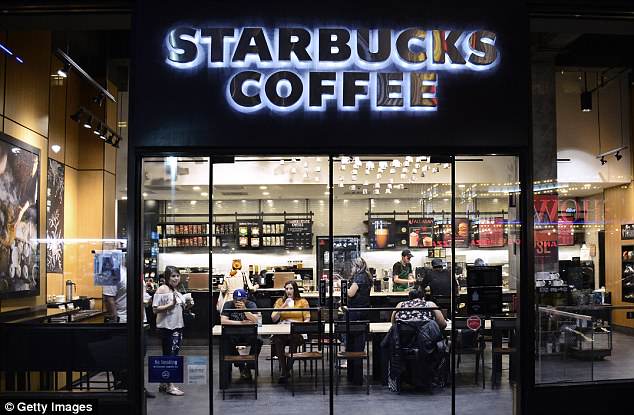 When it comes to health, nothing beats the classics.

‘One of the best things you can drink is good old-fashioned coffee,’ said Jennifer Schonborn, a holistic nutrition counselor in Brooklyn, New York.

‘If you get a black coffee of any size, it’s only five calories.’

Schonborn added that, even if you add milk or sugar, it won’t add very many calories and you can control how much you’re putting in.

Several studies have promoted the multitude of health benefits when it comes to coffee including reducing the risk of depression, lowering the risk of multiple sclerosis and slowing down the progress of dementia. 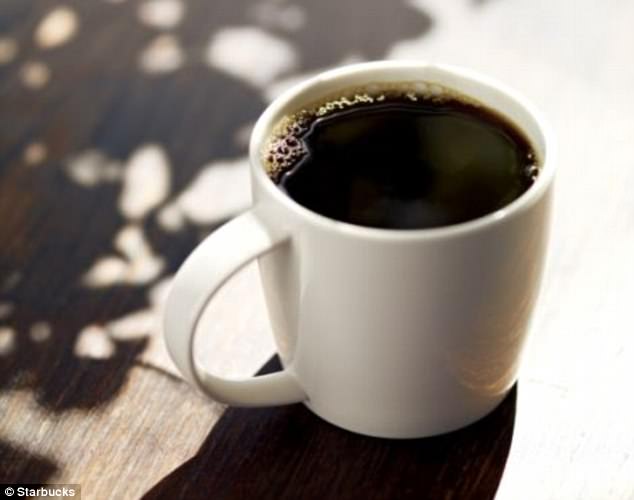 If you’re looking for something similar to lattes, without all the added sugar and fat, then this could be a good option for you.

The green tea misto is a hot or iced green tea that has steamed milk added to it.

‘It’s a little less of the steamed milk than in a regular latte but you still get the frothiness,’ said Adena Neglia, registered dietitian at Brown & Medina Nutrition in New York City.

In human-controlled trials, green tea has been shown to increase fat-burning and boost metabolic rate. 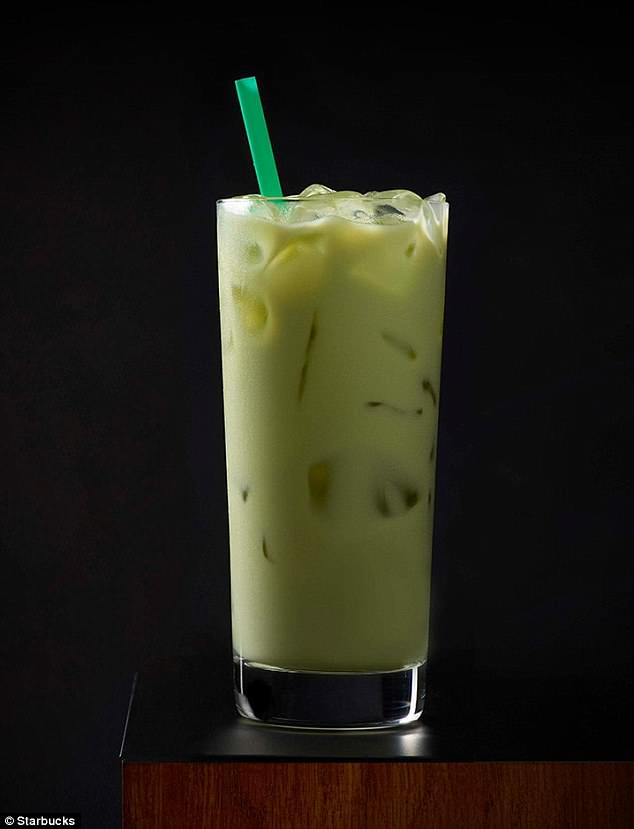 The green tea misto is a hot or iced green tea that has steamed milk added to it, which will give you ‘the frothiness of a latte with half the amount of sugar’

While many of Starbucks’s blended creations are delicious, its ingredients are sure to wreak some havoc on your body.

‘If you’re concerned about calories and sugar, definitely avoid the Frappuccino,’ advised Schonborn.

‘If you get a Venti (20 ounces), which is the largest size, it’s 540 calories. Right there you’ve just eaten another meal.’

Schonborn also pointed to the grams of sugar in the drink, 70 grams, which is the equivalent to 17.5 teaspoons of sugar. 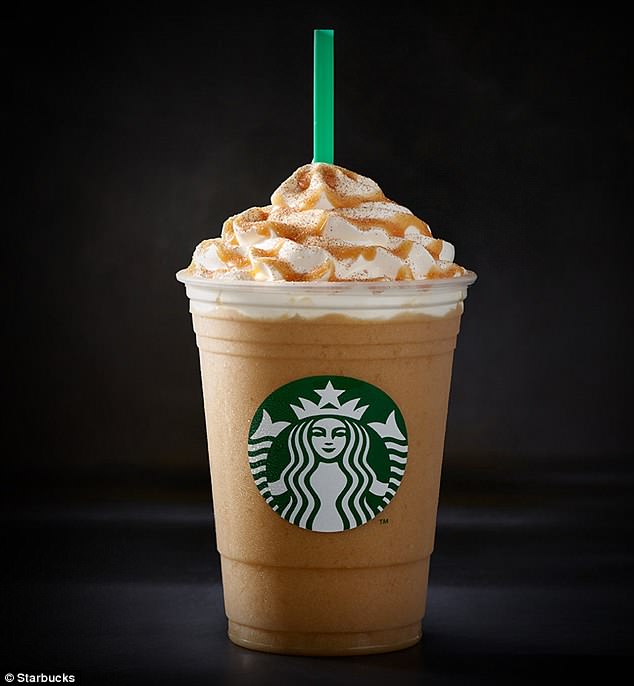 Because of marketing, Starbucks Refreshers may come across as light alternatives to some of their more indulgent drinks.

But, due to how much sugar these drinks have – 25 grams in the case of a Grande Cool Lime Lemonade – they’re not far off from some Frappuccinos.

‘To me, this is in the same category of sodas and sweetened iced teas,’ said Schonburn.

‘I don’t recommend drinking sweetened beverages. These are empty calories. Sugar is an appetite-stimulant and it will just makes you hungrier and crave more sugar.’ 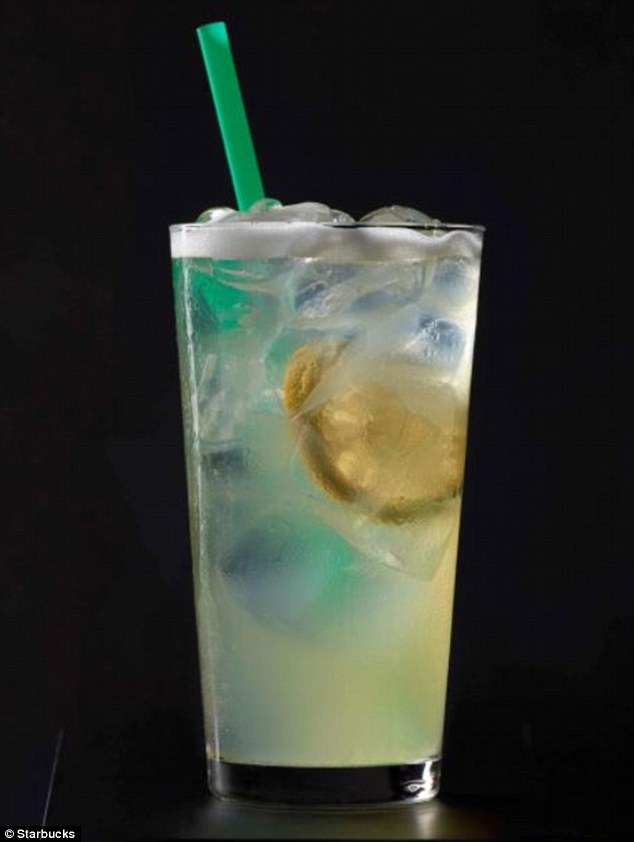 Because of marketing, Starbucks Refreshers may come across as light alternatives, but the sugar content is often just as high as a frappuccino

Schonburn recommends going for the oatmeal if you forgot to pack breakfast and want to grab something at Starbucks.

‘It’s not pre-sweetened, so you can control how much sugar you’re adding,’ she said

‘It’s a whole grain so its gives people sustained energy more than any of the items that contain white flour.’

Oatmeal is also full of soluble and insoluble fiber, helping to aid digestion and keeping you fuller longer. 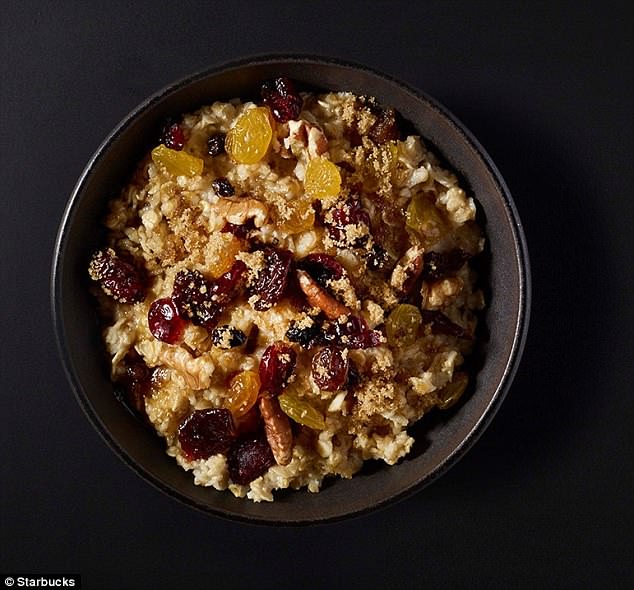 Oatmeal is full of soluble and insoluble fiber, helping to aid digestion and keeping you fuller longer

Nutritionists agree that when it comes to breakfast sandwiches, this is one of Starbucks’s best.

‘It’s got all of the components of a good fuel mix,’ Neglia said.

‘It’s got carbs (from the wrap and spinach), protein (from the egg white and cheese) and fat (from the cheese).’

Spinach is among the healthiest of vegetables and is high in vitamins A, B6, C, E and K, folate, zinc, calcium and iron.

Egg whites are an excellent source of protein, with more than half the protein of an egg being found in the white part. It is also high in vitamin B2. 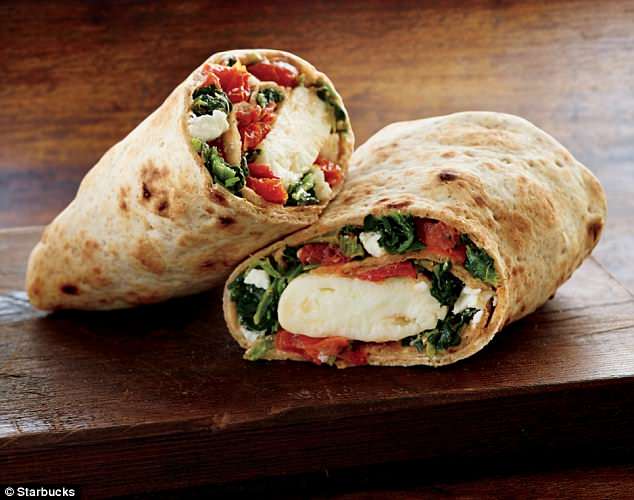 Nutritionists noted that the wrap a was a ‘good fuel mix’ due to having carbs (from the wrap and spinach), protein (from the egg white and cheese) and fat (from the cheese)

While pastries in general should be avoided, our nutritionists say to be careful conflating ‘reduced-fat’ with ‘healthy’.

‘There’s a lot of sugar, a lot of calories and not full of nutrients,’ said Keri Glassman, founder of Nutritious Life in New York.

In fact, one serving of the coffee cake has 44 grams of sugar, which is about 10 teaspoons of sugar.

‘That sugar will turn into fat, spike your blood sugar levels, and then you’ll crash an hour later.

Glassman also noted that the cake has long list of ingredients, including preservatives and fillers, and says it’s better to choose items made up of as many whole ingredients as possible. While pastries in general should be avoided, our nutritionists say to be careful conflating ‘reduced-fat’ with ‘healthy’

Our nutritionists say that, unlike some of Starbucks’s other sandwiches, the bread of this breakfast sandwich is made from white flour, which will not fill you up as long.

Additionally, sausage is not as healthy of a meat as some of the coffee shop’s other options, including turkey bacon and chicken sausage.

‘Eating sausage occasionally is not bad if your practice generally healthy eating habits, but this sandwich wouldn’t be a good idea if someone’s doctor wanted them to watch their sodium,’ said Neglia.

When you consume too much salt, the extra water stored in your body raises your blood pressure.

In turn, the elevated blood pressure puts a greater strain on the kidneys, arteries, brain and heart. 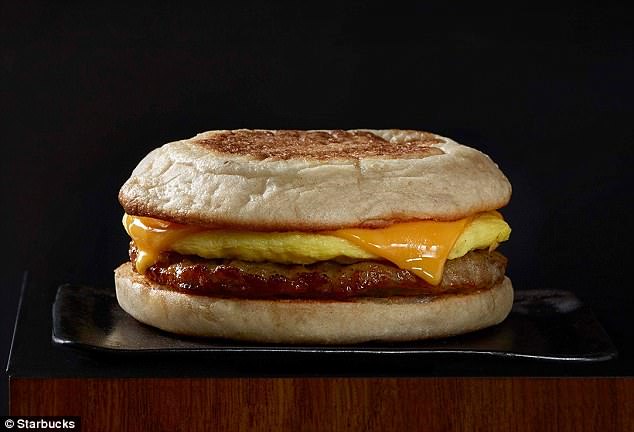 Unlike some of Starbucks’s other sandwiches, the bread of this breakfast sandwich is made from white flour, which will not fill you up as long

When selecting what to eat for lunch, you want something that fills you up for three to four hours, and the nutritionists say this bowl will do just that.

‘It has 650 calories, which is good. When it’s lunch time you want something filling,’ said Schonburn.

‘You’re getting protein from the lentils and sunflower seeds, whole grains with the brown rice. It’s a good whole food item.’

She adds that with 21 grams of dietary fiber, this bowl provides you with 84 percent of your fiber for the day. 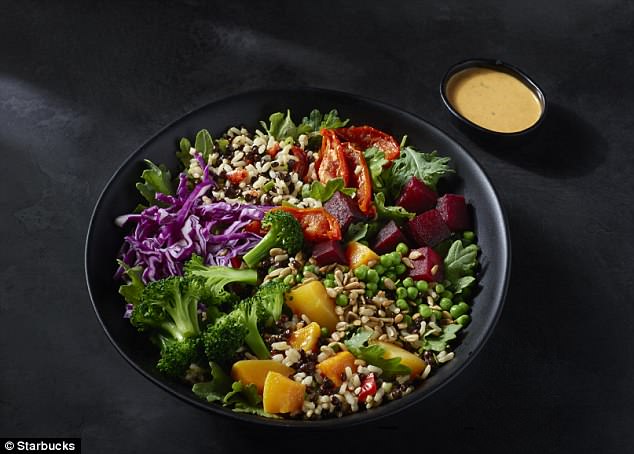 Our nutritionists say that with 21 grams of dietary fiber, this bowl provides you with 84 percent of your fiber for the day

Our nutritionists say that with the 20 grams of protein in this box, you’re bound to be full and satiated.

Studies have shown that protein is the most filling macronutrient, decreasing the levels of ghrelin, a hormone that increases appetite.’

‘The apples and grapes will also give you vitamin C and fiber and the peanut butter is a healthy fat, which you want because it’s really satiating.’ 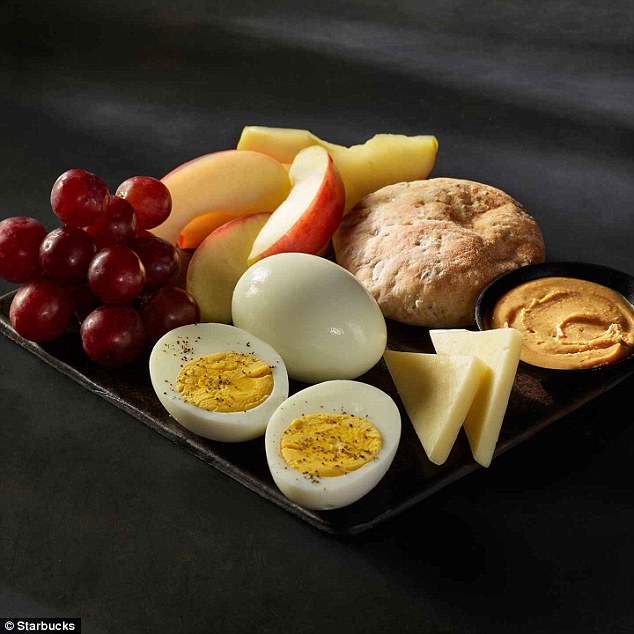 The egg and cheese box was noted as yet another fuel-mix of protein, carbohydrates and fat

The calorie-content of this sandwich doesn’t concern our nutritionists as much as the ingredients that make it up.

‘The main concern is the bread,’ Schonburn said of the apple brioche bread Starbucks uses.

‘It’s a white bread and because the fiber has been stripped out of white flour, we digest it more quickly. We get hungrier sooner so we tend to eat more food over the course of the day.’

She also warns that the amount of sodium is incredibly high at 1480 milligrams or 62 percent of your recommended daily intake.

Additionally, according to the American Institute for Cancer Research, just 1.7 ounces of processed meats eaten daily, which is less than two strips of bacon, can increase your risk for colorectal cancer by 21 percent.

‘A cured meat like bacon is best kept to once a week,’ said Schonburn. 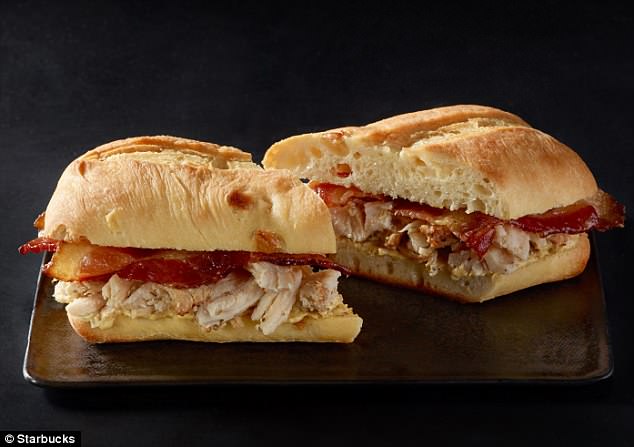 Similar to the sandwich before it, our nutritionists say the refined ‘artisan’ bread will not keep you full as long as whole grain bread will.

‘You’re going to crash later on the day. Also if you’re consuming extra calories of sugar, what you’re eating will turn into fat in your body.’

Neglia added that unlike the protein box, you’re not getting a full serving of fruits/vegetables.

‘Generally, the more colors that are on your plate the healthier your meal is. Probably the only serving of veggies you’ll get is some lettuce or some peppers or onions.’ 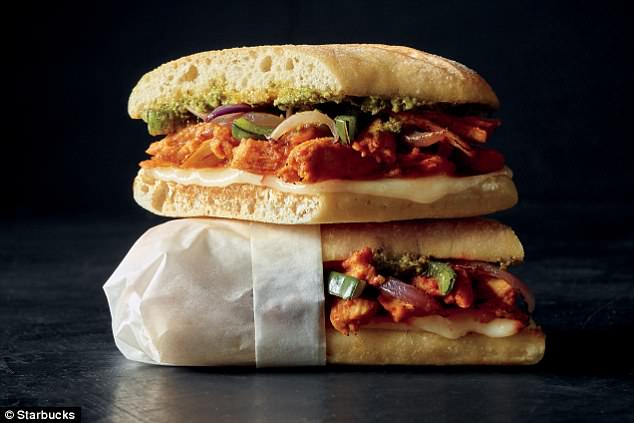 While maybe delicious, the sandwich is on a highly-processed type of bread that the body converts into sugar

Around 5.5 Million People Have Signed Up for 2023 Obamacare Plans
Recent Posts
HEALTH PROBLEMS

Around 5.5 Million People Have Signed Up for 2023 Obamacare Plans