IS wearing a face mask bad for you? New York pediatrician’s experiment shows her N95 did NOT drive up her CO2 to dangerous levels as social media explodes with claims that ‘masks can kill’

Most of us have been wearing face masks for several weeks to help prevent the spread of the novel coronavirus as the pandemic rages on.

But social media has been exploding with claims that masks reduce the intake of oxygen, forcing people to breathe in high levels of their own carbon dioxide.

People claim they feel lightheaded or dizzy, and that breathing in too much carbon dioxide could cause them to suffer from seizures, or even suffocate.

But one New York City pediatrician, Dr Rebekah Diamond of Columbia University Medical Center says this is just not true.

In her experiment, she shared a picture of her carbon dioxide levels after a day of wearing an N95, which showed the mask did not drive her CO2 up to dangerous levels.

DailyMail.com spoke to two respiratory experts who said, plainly, there is no evidence that prolonged face mask use will reduce oxygen levels in the blood – or kill you. 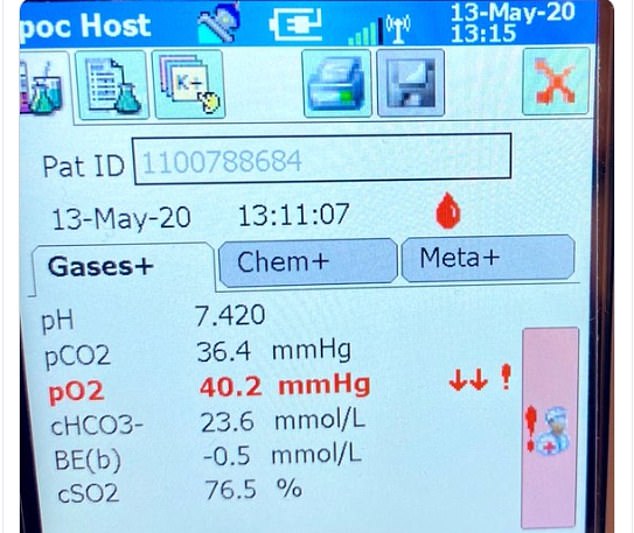 Normal PCO2 levels are between 35 millimeters of mercury (mmHg) and 45 mmHg and Diamond’s levels were 36.4 mmHg 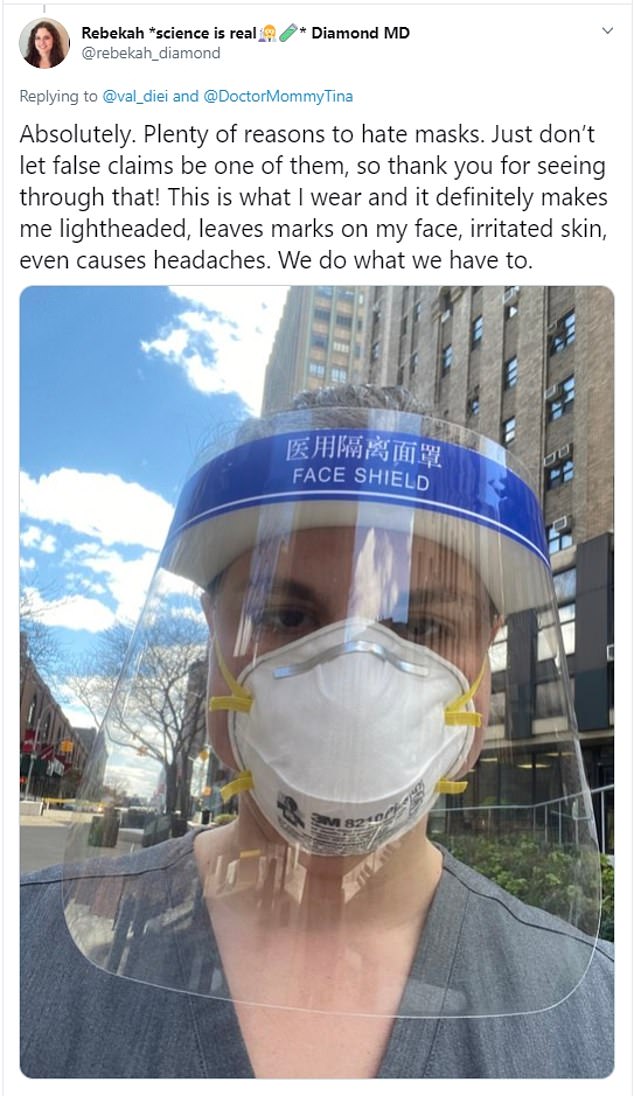 ‘Apparently worrying about hypercapnea (too much carbon dioxide) from wearing a breathable cloth mask is a thing,’ Diamond wrote on Twitter.

Normal PCO2 levels are between 35 millimeters of mercury (mmHg) and 45 mmHg.

Diamond took a blood test that showed the levels of gases in her body. Her CO2 levels were 36.4 mmHg.

She then posted a photo of herself outside the hospital where she works wearing both an N95 mask and a face shield.

‘Plenty of reasons to hate masks. Just don’t let false claims be one of them, so thank you for seeing through that!’ Diamond tweeted.

‘This is what I wear and it definitely makes me lightheaded, leaves marks on my face, irritated skin, even causes headaches. We do what we have to.’

Several posts have been circulating around social media claiming that wearing a face mask can cause such a build-up of carbon dioxide that leads to people passing out – or worse.

One Facebook post from May 8 claims ‘oxygen in the blood reduces’ and ‘oxygen to the brain reduces’ from wearing masks for too long.

Another post alleged ‘prolonged use of a face mask’ can led to hypoxia, which is when there are low oxygen levels in the tissues that can result in death 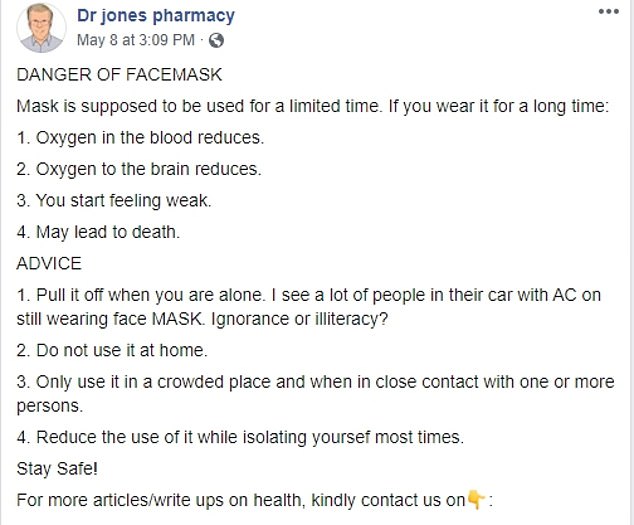 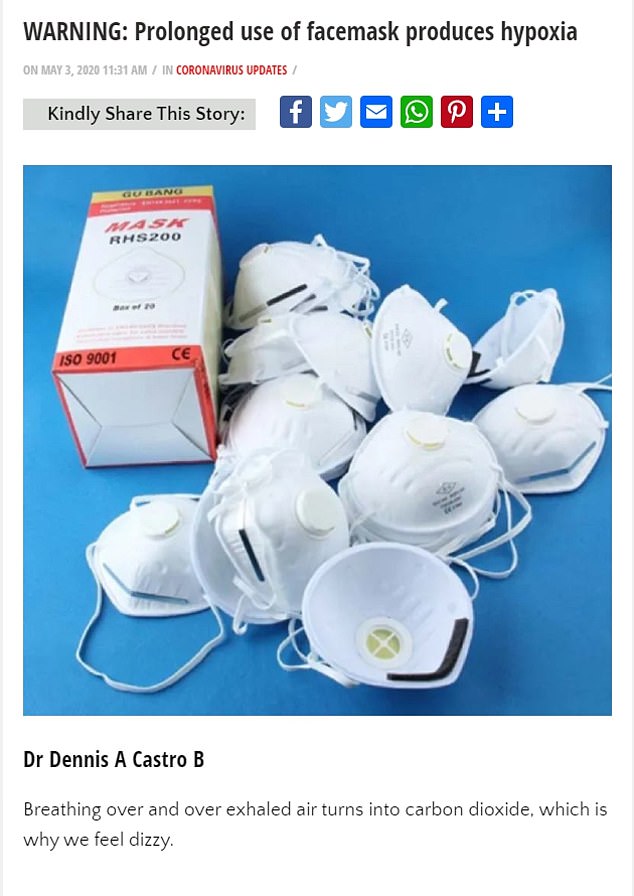 Several posts online claim that prolonged face mask use can reduce oxygen in the blood or lead to hypoxia, which is when there are low oxygen levels in the tissues

Dr Steve Lubinsky, the medical director of respiratory care at New York University Langone Health, told DailyMail.com there is no danger in face mask use.

‘[Masks are] not comfortable and there is data that shows they can cause headaches, they’re irritating and it does interfere with daily life,’ he said.

‘People want to see the face, and that’s  understandable of normal conditions,’ he told DailyMail.com.

‘But at a time when health is adrift, it’s important to [wear masks] for us and for each other.’

There are rare cases in which carbon dioxide, a natural by-product of respiration, can be deadly.

Inhaling high levels of the gas can lead to hypercapnia, also known as carbon dioxide toxicity, and cause headaches, double vision, lack of concentration or suffocation – but it has to be a very high concentration of CO2. 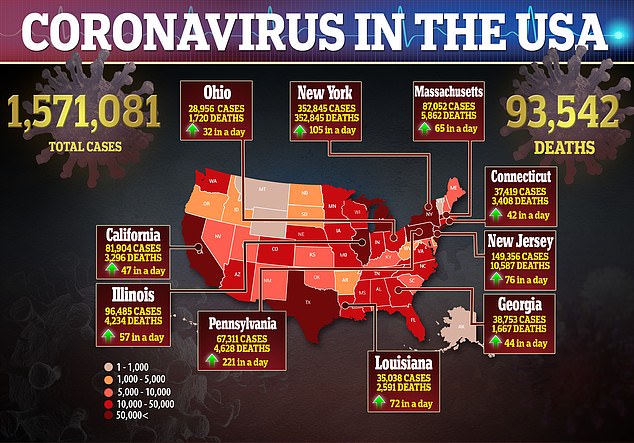 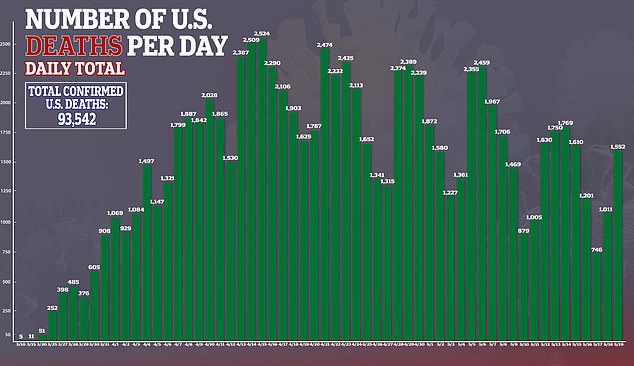 ‘We’ve seen, in New York, there’s a significant risk of illness and death in patients who get COVID-19, we’ve seen people get sick, grievously ill and die,’ Lubinksy said.

‘We’ve never seen anyone with an illness due to face mask use.’

Both physicians say wearing face masks should be coupled with social distancing and good hand hygiene such as washing your hands and trying not to touch your face.

‘Short of having universal testing, the best next thing is to cover each other’s faces, nose and mouth and emphasize that this doesn’t replace other important things like social distancing and hand washing,’ said Dweik. 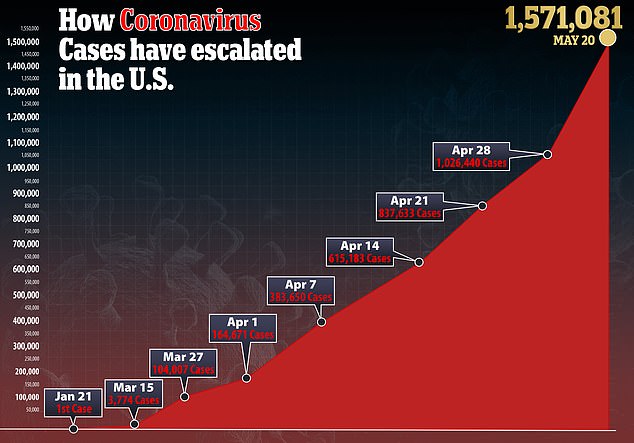