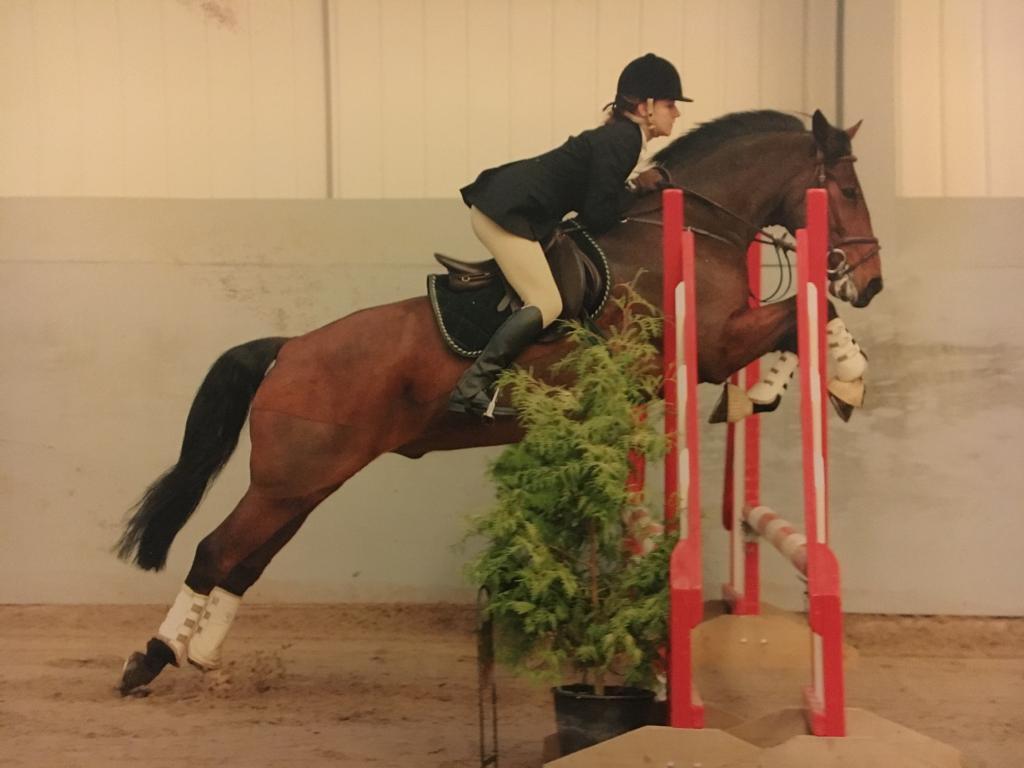 The average human body has around 10 pints of blood in it.

Thanks to nine strangers who each donated one of theirs, I’m here today.

I was working at my local riding school having just returned from a gap year in Australia a few weeks earlier. Tasked with testing out a new arrival, I hopped on board and took her for a spin in the arena.

It became clear quite quickly she was a bit of a monkey, throwing in a few bucks here and there, so I was fairly prepared when she decided enough was enough and rocketed skyward a few times in succession.

Two, three, four bucks, and still in the saddle. But the fifth, with a cheeky twist, threw me out the side door.

As the ground rapidly approached I had no time to adopt the jockey ‘tuck and roll’, instead landing with an awkward thump. Well, a thump and a crunch, knowing straight away that I’d broken my collar bone, a common injury in riders.

Luckily the local A&E was just five minutes away, so I knew after a quick call to my mum, I would have an X-ray and sling on in next to no time.

Waiting in the hospital reception afterwards, having been discharged with the broken collar bone confirmed, I explained away an intense stabbing pain in my side as the result of having just been dropped about six foot, and the sweat now emanating from every pore just my body becoming the drama queen my mind always had been.

As the evening progressed at home, the pain in my side didn’t subside. Figuring a good night’s sleep was in order I rose off the couch to head to bed.

The whole incident made me a massive NHS evangelist

Turns out, that pain was the result of a ruptured liver, so ignoring it hadn’t really been the best idea.

Luckily I’m a Geordie, so not only are we supremely tough, we also have some of the best healthcare available. Of the top 200 hospitals in the world, two are in Newcastle – the Royal Victoria Infirmary and the Freeman Hospital in Newcastle.

The Freeman became my home for two weeks after a brief trip back to the local hospital to diagnose the aforementioned ruptured liver, before a consultant anaesthetist and a large bag of blood accompanied me by ambulance to the city.

The hope was that it would clot and heal on its own, although that would mean weeks of bed rest followed by months of only light exercise.

Three days and two nights of monitoring in ICU suggested it might be going to plan, so I was relocated to the high dependency unit – where there’s one nurse to every two patients, versus the 1:1 in intensive care.

However, somewhere along the move – and unbeknown to me at the time – it ruptured again.

Cue going into theatre at around 5am for an X-ray wire guided attempt to clip the split back together – basically the surgeons go up through the main artery in your thigh and work away internally. My liver was in too much of a mess though, so after a few hours I was wheeled out, anaesthetised, and wheeled back in for open surgery.

Fair to say, it didn’t start well. As well as an abdomen swimming with blood, when my lungs were artificially inflated by the ventilator, the broken shard of collar bone punctured one.

All told, I was in surgery for around nine hours, received nine pints of blood to replace the blood I’d lost, and had 60% of my liver removed.

Thankfully it’s an incredible organ and grows back, like an internal, blood-filtering lizard’s tail.

After two more nights in ICU – the first completely oblivious while still sedated and apparently at risk of kidney failure – I was moved to a regular ward, where my surprisingly rapid recovery began (I was back at work within six weeks).

The whole incident made me a massive NHS evangelist years before Covid-19, but alongside the incredible nurses, doctors, surgeons, porters and cleaners who all played their part (including the pair of incredibly good-looking junior doctors who only came around to ask if I’d had a bowel movement), I’ll be eternally grateful to those strangers who took time out of their day to donate blood.

Not unlike the bloodstream itself, the NHS’s network of blood donation and delivery is at work 24/7, yet goes largely unnoticed as people go about their daily lives. But NHS Blood and Transplant make approximately 136,000 deliveries a year, taking around 1.7million units of blood to hospitals across the country.

I regret to say I hadn’t donated blood before ‘the incident’ – I had tried, but low iron levels ruled me out. Now, as a blood recipient, I can’t donate either.

However, my family are all donor superstars. My sister has racked up 26 pints so far – joining the register as a way to help pay back my blood debt! My dad is on 37.

Bar a huge scar just below my ribs I’ve thankfully had no lasting physical effects from the whole ordeal – but my gratitude to those who gave up their time and blood has never faded.

So if you want to be an actual, real-life hero, it only takes an hour of your time. You get a free biscuit, and you’ll help save somebody’s life.