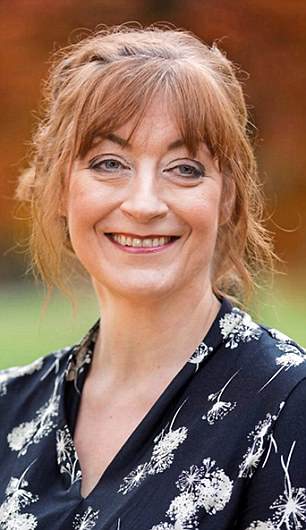 A 15-minute radio-wave treatment could give relief to people plagued with long-term dry coughs and sore throats.

British doctors have pioneered an experimental procedure which has been a complete success for 90 per cent of patients who have been offered it so far.

Acid reflux – or heartburn – coughs and sore throats are a common problem and typically not an indication of anything sinister.

However, some sufferers experience other symptoms such as hoarseness, excessive throat-clearing, and globus – the sensation of a lump in the throat – for months and even years.

They are often offered heartburn medication which is ineffective.

Some studies suggest that in about three per cent of these patients the discomfort may be due to abnormal cells on the inside of the oesophagus, the tube that carries food to the stomach from the mouth.

The condition is known as inlet patch, or IP (also referred to a cervical inlet patch), and the diagnosis is given when there are one or more abnormal areas on the inside of the oesophagus.

These areas contain cells normally found elsewhere in the body, including inside the stomach, and appear yellow or a pinkish ‘salmon’ red when looked at with a medical camera, rather than the normal pale, pearl grey of healthy oesophageal tissue.

As many as ten per cent of the population may have IP, but in the vast majority it causes no noticeable difficulties. The condition is thought to develop in the embryo. 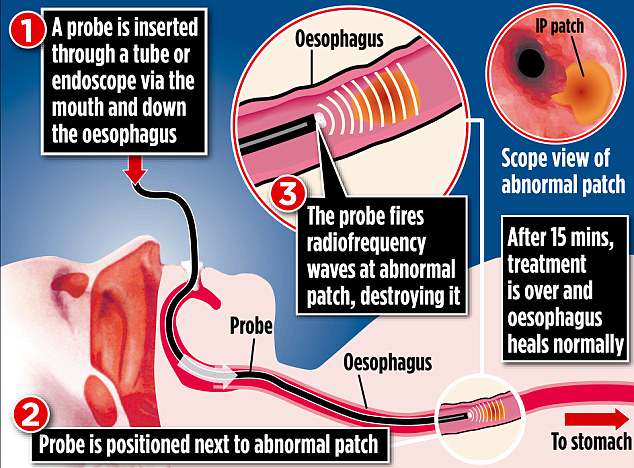 It is not fully understood why IP causes the acute symptoms, and little is known about the long-term risks of leaving it untreated.

The new minimally invasive treatment is known as radiofrequency ablation of symptomatic cervical inlet patch and is designed to destroy the patches, which can be up to 2in in diameter.

Developed by gastroenterologists at Guy’s and St Thomas’ Hospital in London, the procedure is carried out under conscious sedation.

A probe is inserted through a tube or endoscope inserted into the throat and positioned next to the patch.

This fires radiofrequency waves – a type of heat-producing electrical energy – at the area, eradicating the cells.

The day-case operation takes on average about 15 minutes.

Consultant gastroenterologist Dr Jason Dunn, who is leading research on the new treatment, has shown that one year after treatment, the patch had disappeared in eight of his ten patients.

In the remaining two, more than 90 per cent of the patch had gone.

After 14 months, there had been no recurrence of the patch or symptoms.

Dr Dunn says: ‘The procedure destroys the unwanted tissue with no side effects. It is particularly suited to those people with symptoms who have not responded to heartburn medication.’ 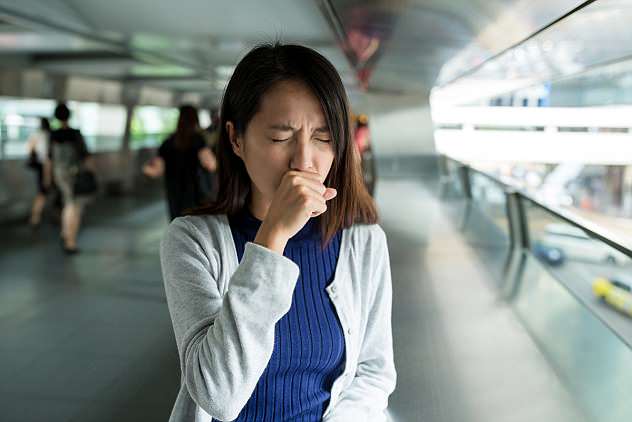 It is not fully understood why IP causes the acute symptoms, and little is known about the long-term risks of leaving it untreated

One of the first patients to benefit from the new treatment is Karen Holford, 56, who first had symptoms about four years ago.

The mother-of-three from Hemel Hempstead, whose job involves public speaking, said: ‘I had a really rough cough that would go on and on. I would have to take each breath carefully to try not to trigger it.

‘I had tests for all kinds of things, antibiotics, MRI scans, and bronchoscopies.’ Eventually, she was referred to a gastroenterologist who diagnosed IP and had treatment earlier this year.

She says: ‘It was easy and fairly pain-free. After two treatments, three months apart, I really noticed a difference. It has made my life less stressful and more comfortable.’

A new concept thrilled the nutrition geek within me this week: the introduction of ‘healthy’ vending machines.

Now, I’m not opposed to the odd chocolate bar or bag of Walkers Max but, typically, the only options given by vending machines are sugary confectionery, caffeine and sugar-laden energy drinks and packets of salty crisps.

I’ve got one such machine at my gym – and it does seem to defeat the object.

So what’s not to like about the idea of convenient grab-and-go snacks that are also a bit better for you?

Well, my hopes of a healthy, post-workout bite were shattered when I learned what sort of products were available in these machines, launched at 13 Virgin Active gyms nationwide.

Let’s look at one offering: Ollybars breakfast bars. They contain 16g of sugar per bar, more than half the daily limit, and the calorie equivalent of four Oreo biscuits.

Thirsty? Try a can of fizzy Tenzing, a ‘100 per cent natural’ energy drink. It’s made with green coffee, herbal extracts, Himalayan rock salt – and a load of caffeine and 30g of sugar.

That’s just a little less than a can of Coke. Seems to me it’s a case of same old vending machine rubbish, in slightly different packaging.

Avocado energy balls and peanut protein bites are also on offer – for those interested in punishing their taste-buds.

While I appreciate the sentiment, this attempt at reprogramming snack culture seems to me like a missed opportunity. On Meghan’s instigation, the pair were said to have opted for a liquid diet of fruit and vegetable smoothies. Harry, 33, shed half a stone

As much as I love ’em, I was rather disappointed by the new Duke and Duchess of Sussex’s alleged pre-wedding diet.

On Meghan’s instigation, the pair were said to have opted for a liquid diet of fruit and vegetable smoothies. Harry, 33, shed half a stone.

But according to dietician Sarah Ellis, juicing diets cause havoc on the body. She says: ‘High levels of sugar in juice are linked to dental cavities and spikes in blood sugar, and when fruit is juiced, you lose the fibre.

‘This diet is seriously low in protein and energy, meaning it won’t fill you up. Why waste calories on juice when you could have a nice sandwich and piece of fruit for the same calories and micro-nutrient content?’

I’ll give the Royal smoothies a miss, thanks, and stick to a good old-fashioned coronation chicken sandwich.