All new Netflix shows made for under 14s will exclude smoking and vaping, the streaming company has announced.

It comes after a report found the rate of young characters on TV shows who smoke quadrupled last year.

The biggest culprit was Stranger Things, which stuck cigarettes in the fingers of far more young characters in season two.

Netflix responded with a statement saying that, from now on, smoking will only feature in PG-13 movies or TV-14 shows if necessary for ‘reasons of historical or factual accuracy’.

The company will also wean out smoking in all other shows and movies ‘unless it’s essential to the creative vision of the artist or because it’s character-defining (historically or culturally important).’ 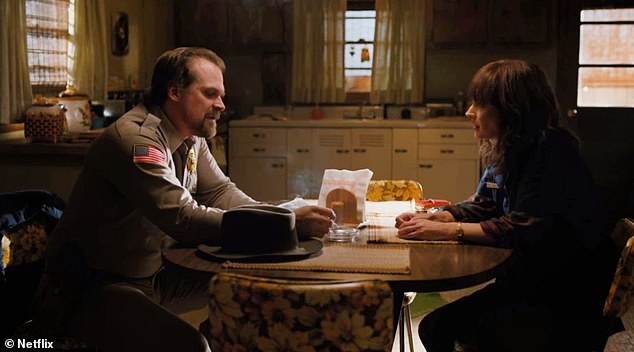 The move comes after a report showed a four-fold increase in characters smoking in shows made for under-14s, particularly in season 2 of Stranger Things (pictured)

‘We also recognize that smoking is harmful and when portrayed positively on screen can adversely influence young people.’

The report was compiled by Washington, DC-based Truth Initiative, which is a research group focused on reducing smoking.

Previously, the group has found smoking to be more prevalent in Netflix shows than in content from any other network.

This year, their researchers reassessed, and found the gap not only remained, it had widened. But across the board, rates of smoking had soared.

Studying shows from 2017 – the latest available to analyze fully – they found 92 percent of all shows – Netflix and other networks – contained images of tobacco. That’s up from 79 percent in the season prior.

They found nearly three times more instances of smoking in Netflix shows compared to the year before – up to 866 from 299. Smoking rates did increase in other network shows, too – with nearly two-and-a-half times more cigarettes than in the year before – but still dwarfed by Netflix. 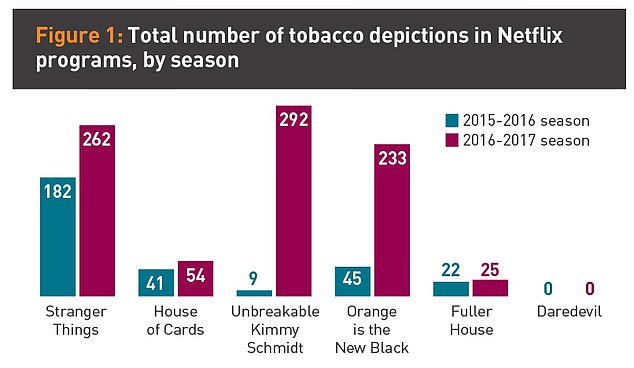 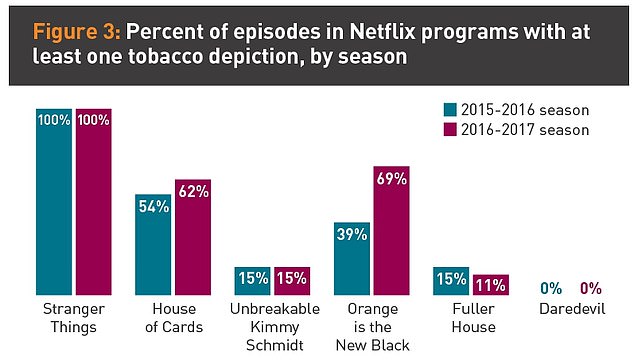 The researchers zeroed in on specific shows, surveying 750 subscribers aged 15-24 to gauge which shows are the most popular.

They landed on: Orange Is The New Black, Stranger Things, Fuller House, Daredevil, House Of Card, and Unbreakable Kimmy Schmidt.

In last year’s report, Stranger Things had by far the highest rate of smoking.

This year, it rose, from 182 tobacco depictions per episode to 262.

The report – and Netflix’s response – comes amid a widespread push to curb vaping and smoking in young people, amid the dramatic and swift rise in teens taking up e-cigarettes like Juuls.