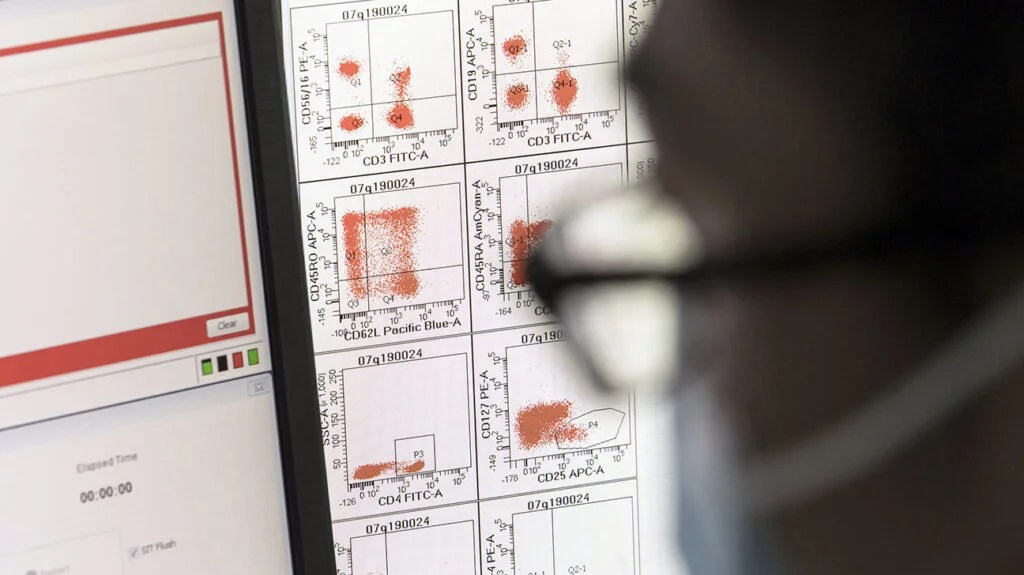 About 4% of the entire world’s population has an autoimmune disease — a condition where the body’s immune system mistakenly attacks its own tissues and organs.

In general, there are no cures for autoimmune diseases. Normally doctors treat symptoms with medications, lifestyle changes, and other treatment methods. Some of the medications used essentially block a person’s entire immune system. This can leave a person open to infection from other diseases.

Now researchers from the Washington University School of Medicine in St. Louis, MO discovered a cancer therapy called CAR-T can be used to target and destroy only the immune cells in a person’s body causing the autoimmune disease, leaving healthy immune cells alone.

The study was recently published in the journal Science Immunology.

What is CAR-T therapy?

“T cells are specialized immune cells that can kill your own cells, for example, when they are infected with a virus,” explained Dr. Chyi-Song Hsieh, the Alan A. and Edith L. Wolff professor of rheumatology and a professor of medicine, pathology, and immunology at Washington University School of Medicine in St. Louis, MO, co-senior author of this study.

“This ability has been repurposed with CAR-T cells, which have been genetically engineered to target very specific cells that are unwanted in the body, such as tumor cells, and kill them,” he told Medical News Today.

Through CAR-T therapy, a doctor takes a sample of a person’s T cells from a blood sample. The T cells are genetically altered in a laboratory setting to be CAR-T cells designed to target and remove specific immune cells. The CAR-T cells are infused back into the person’s bloodstream to do their work.

Currently, doctors use CAR-T therapy to treat blood cancers, including leukemia and lymphoma. It is also being studied as a therapy for other types of cancers and for combating solid tumors.

When asked why the research team decided to study whether CAR-T therapy could be used for autoimmune diseases or not, Dr. Hsieh explained that he and the other co-senior author of the study, Dr. Gregory F. Wu, an associate professor of neurology, pathology, and immunology at Washington University, had previously treated autoimmune diseases such as MS and rheumatoid arthritis with immunosuppressive medication, “but that’s like putting the brakes on the entire immune system to stop only a few bad cells.”

“So we run into problems with people catching colds, but also serious infections like COVID,” he continued. “With the success of CAR-T cells in treating cancer, we wanted to see if that technology could be adapted to selectively eliminate only the cells directly responsible for autoimmunity.”

For the study, the researchers designed a molecule combining part of a protein found in the myelin sheath covering nerve fibers and a protein that activates T cells. Only T cells going after myelin — the “bad” cells — would be affected by this combination molecule.

Scientists then make their own CAR-T therapy by placing this combination molecule onto a type of T cell called a killer T cell capable of eliminating certain cells. In theory, any problematic T cells would “take the bait” and be destroyed.

To test their theory, researchers used their CAR-T therapy on mice with an MS-type condition. Upon analysis of their findings, scientists found their engineered CAR-T cells helped reduce signs of the disease in mice already showing neurological effects.

Additionally, it helped prevent the MS-type disease from developing in mice not yet showing symptoms.

“Our research in animal models suggests that targeting autoimmune cells with CAR-T cells has the potential to treat ongoing diseases such as MS,” Dr. Hsieh explained.

“However,” he cautioned, “it will likely take many years before these findings may be utilized in patients as we often do not know exactly what the autoimmune cells are looking for in human autoimmunity, unlike our animal models.”

“This is an area of active investigation in the scientific community and is a solvable issue. We expect that some years down the road, this type of CAR-T cell therapy directed at only the autoimmune cells may be used to treat and potentially cure autoimmune diseases.”

“The second major implication of our study is that it appears to be easier to prevent autoimmune disease than to treat it,” Dr. Hsieh added. “We hope that it may be possible in the future to design therapies to prevent conditions to develop in individuals predisposed to autoimmunity.”

MNT also spoke with Dr. Santosh Kesari, a neurologist, neuro-oncologist, and director of neuro-oncology at Providence Saint John’s Health Center, chair of the Department of Translational Neurosciences and Neurotherapeutics at Saint John’s Cancer Institute in Santa Monica, CA, and regional medical director for the Research Clinical Institute of Providence Southern California, about this study.

“This is a completely different approach to specifically in a targeted way get rid of the actual cells that are causing the problem, which is usually a minority of cells of all the immune cells that are in your body,” he explained.

When asked what he would like to see in the research’s next steps, Dr. Kesari said it would need validation in human clinical trials as it becomes further developed.

:The great thing about it is even though it may be more intensive and expensive initially if it has long-term durability, it may actually be more cost-effective in the long run. [With] many of these autoimmune disorders like MS, we are treating [people] for decades. So having a more highly-effective initial approach that lasts a long time could actually be better for the patient and more cost-effective for the health system. It will take us many years to figure all that out and human studies to figure all that out.”