Mother-of-two whose son battled eczema that left him looking ‘like a burns victim’ claims his symptoms disappeared just one week after she started using a £4.50 cream

A youngster who spent years battling eczema so severe he looked ‘like a burns victim’ is finally free of the agonising condition just one week after using a £4.50 moisturiser.

Jack, now three, started to develop dry, cracked patches like ‘sandpaper’ all over his body when he was just three months old.

The youngster’s mother Cory Lloyd, 23, kept her son virtually housebound after cruel strangers accused her of not looking after him properly.

After trying countless creams and even bandaging her son’s limbs to prevent them bleeding, Ms Lloyd, from Darwen, Lancashire, was tagged in a Facebook post about the skincare brand Childs Farm, which is designed for eczema-prone skin.

Although sceptical at first, the mother-of-two claims her son’s skin cleared up just one week after using the moisturiser, adding: ‘Jack is so much happier. Eczema took over his life, but now he can finally run around and play again, like kids do.’ 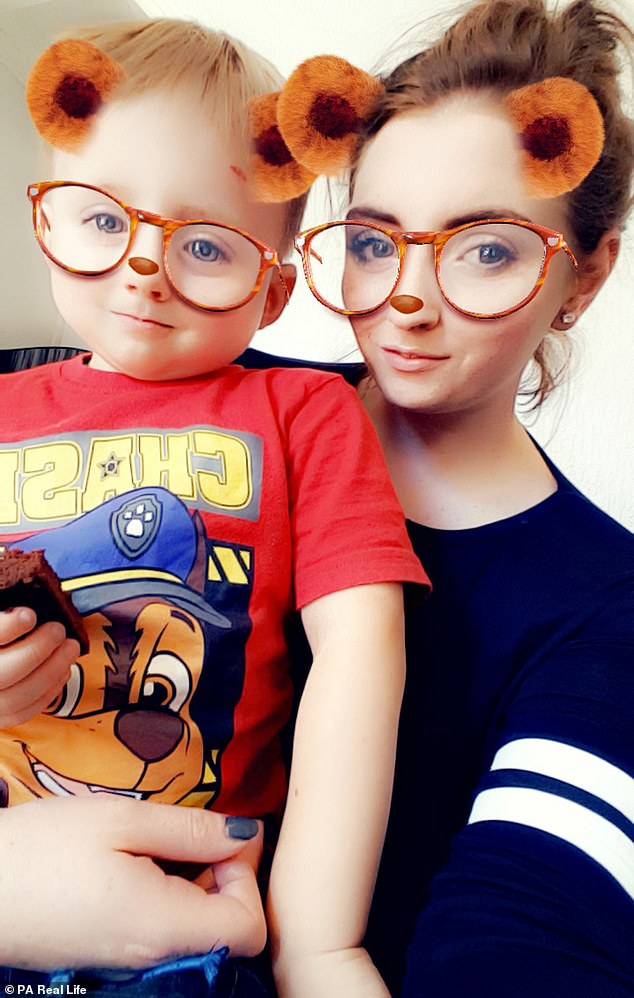 Three-year-old Jack is finally free of his agonising eczema just one week after his mother Cory Lloyd (both pictured) began applying a £4.50 moisturiser to his bleeding, weeping skin 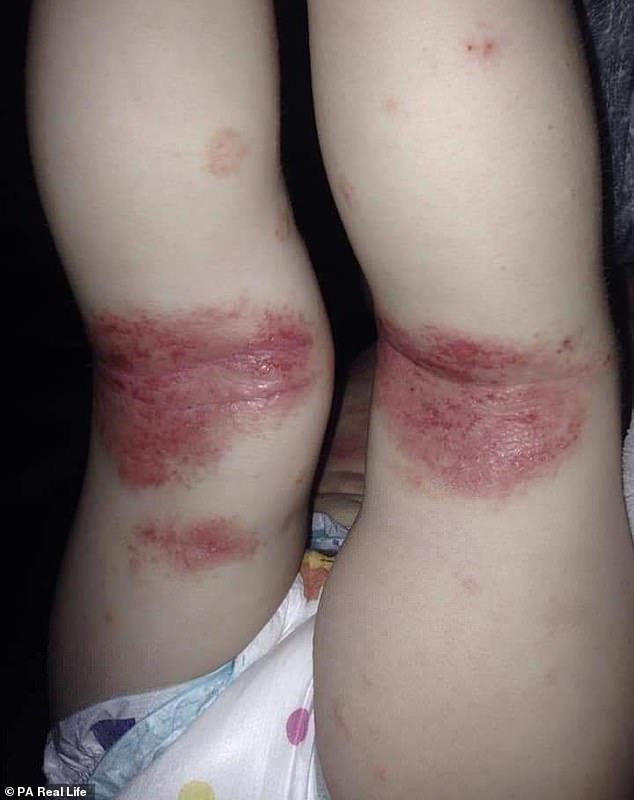 Jack began developing dry, cracked skin all over his body, including on the backs of his knees, when he was just three months old. Initially, Ms Lloyd did not think it was serious 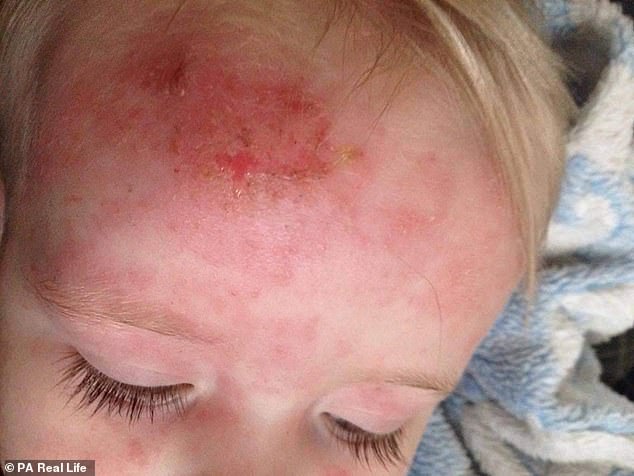 When Jack’s dry skin began to ooze, Ms Lloyd took him to see a GP who diagnosed him with eczema. The youngster was prescribed countless treatments but none eased his suffering

Speaking of the skincare brand, Ms Lloyd said: ‘I was sceptical as we had tried so many things, but literally a week after trying it, his skin was clear.

‘When Jack’s eczema was really bad, I had to stop taking him out as much as I wanted, as instead of enjoying our mother and baby bonding time, I’d be so conscious about people staring at him.

Eczema is an inflammatory condition of the skin that leads to redness, blistering, oozing, scaling and thickening.

It usually appears in the first few months of life and affects around 10 per cent of babies.

Eczema’s cause is not fully understood but it is thought to be brought on by the skin’s barrier to the outside world not working properly, which allows irritants and allergy-inducing substances to enter.

It may be genetic due to the condition often running in families.

As well as their skin being affected, sufferers may experience insomnia and irritability.

Many factors can make eczema worse. These may include:

There is no cure for eczema, however, 70 per cent of childhood sufferers no longer have the condition in their teens.

Patients should avoid known triggers for flare ups and use emollients.

‘Once a lady said to her friend, “Look at that little boy, he’s had a terrible fall, his mum must not have been looking after him”. I just went home and cried.

‘All people saw was a young mum and they judged me, but they weren’t there for the sleepless nights and countless hospital appointments. I was doing everything I could and getting nowhere.’

Jack seemed perfectly healthy until he turned three months old, which is when crusty patches began to develop on his forehead.

When the patches began to weep, she took Jack to a doctor, who diagnosed him with eczema.

Ms Lloyd, who works at a play centre, said: ‘Within a couple of months, the eczema had spread all over Jack’s body.

‘I’d be coating him in moisturiser five times a day and tried so many different creams, steroids and antibiotics that the doctor prescribed, but nothing seemed to help.

‘He’d wake up every morning with blood on his sheets from where his skin had cracked in the night.

‘Eventually, I reached my wits end, went to the doctor and said, “I’m not leaving until I have a referral to a specialist”.

At around 18 months old, Jack was referred to a dermatologist, who prescribed a special suit to keep moisture in and stop his clothes from absorbing the creams his mother was applying.

Forced to wear the suit every day under his clothes, it meant Jack did not want to play with children at his nursery because he knew running would irritate his skin. 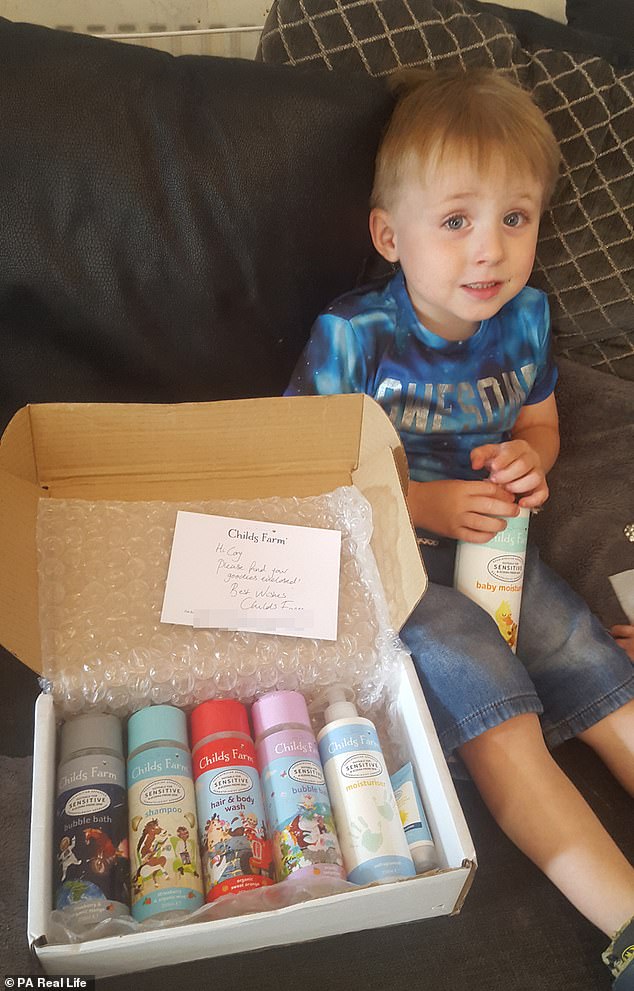 Ms Lloyd was losing hope when a relative tagged her in a Facebook post about the skincare brand Childs Farm. Although sceptical, the moisturiser cleared up his skin after just one week 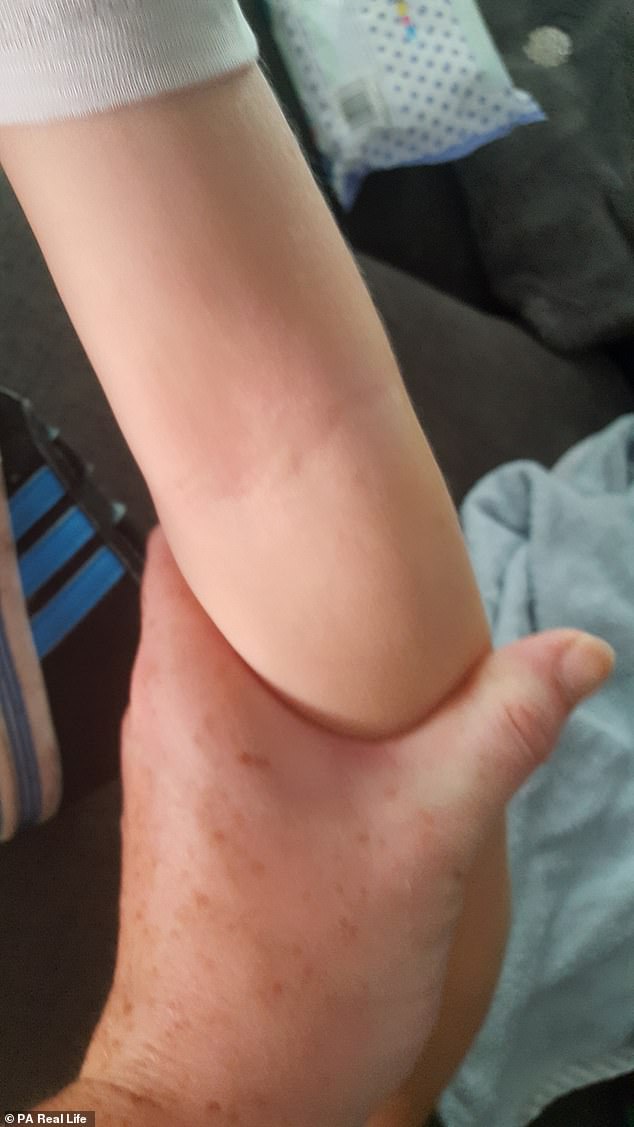 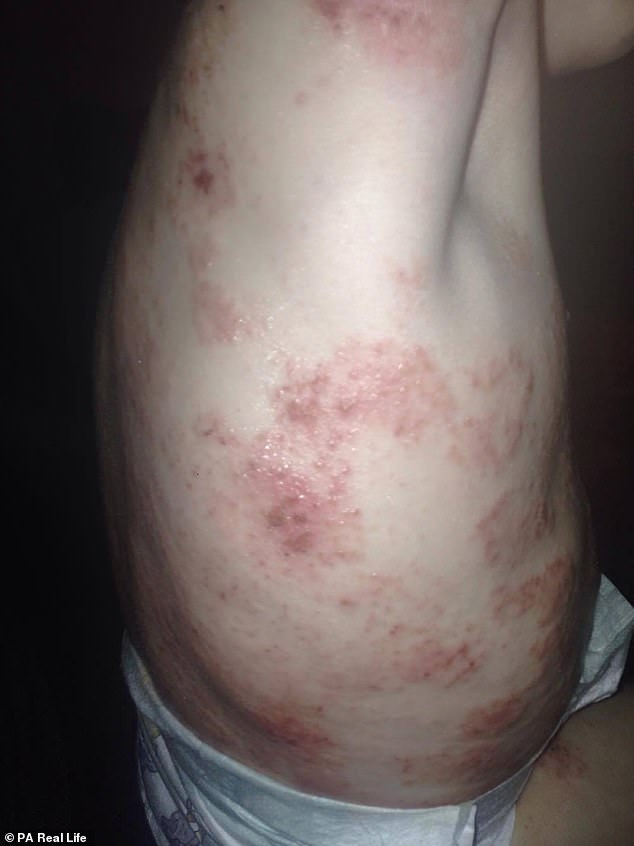 Before, Ms Lloyd would bandage Jack’s limbs to prevent them bleeding. His torso (pictured) was the worst affected area, with the mother-of-two comparing it to ‘sandpaper’ 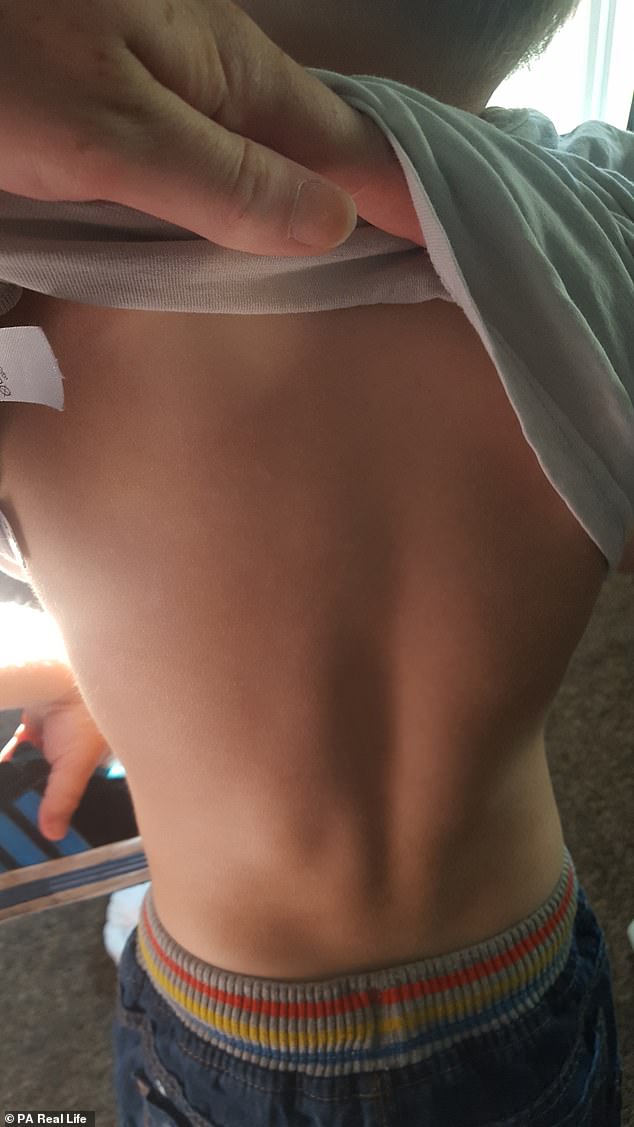 Jack’s back is now clear, with his mother continuing to use the moisturiser and body wash

The youngster also had his legs and arms bandaged in an attempt to keep moisture in.

Ms Lloyd, who also has a one-year-old son called Alfie with her partner Ben Holmes, 23, said: ‘I could bandage his limbs, but his torso was the worst place for eczema. It felt like sandpaper. He literally looked like a burns victim.’

Desperate, Ms Lloyd even asked doctors for an allergy test to determine if something in Jack’s diet was triggering his agonising outbreaks, but a cause has never been found.

Ms Lloyd was losing hope when a family member tagged her in a post about Childs Farm.

She said: ‘At first, I didn’t hold out much hope. By that point, we’d tried so many things that’d made no difference.

‘But after reading reviews, it seemed people were really impressed, so I ordered a few products – a baby moisturiser, a hair and body wash, and a bubble bath.’

The products arrived last July and, just a week after using the moisturiser, Jack’s skin was astonishingly different. 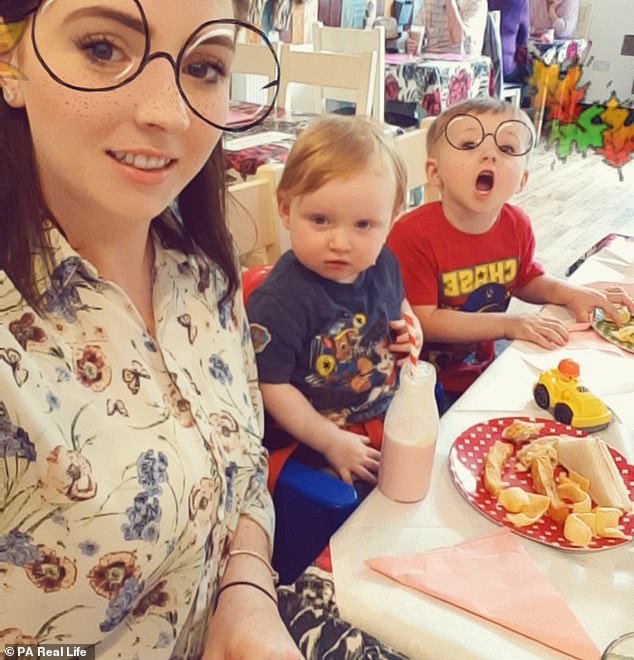 Ms Lloyd (pictured with Jack and her one-year-old Alfie) says the youngster is much happier. He can now play with other children without worrying running will irritate his skin 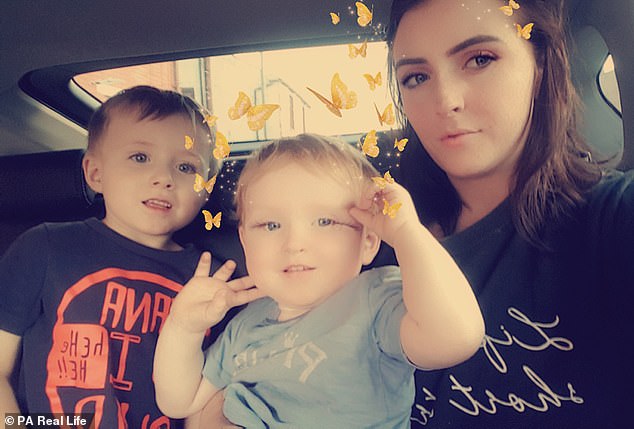