This is the incredible moment a young cystic fibrosis sufferer took her first steps after receiving a life-saving double lung transplant.

Violet Gomez, 25, said she feels ‘free’ following the surgery, which means she can breathe deeply for the first time in her life.

The young woman previously relied on oxygen 24/7 after a build of mucus in her organs reduced her lung capacity to 20 percent.

While her friends graduated college and enjoyed life, Violet was so unwell she was unable to walk the length of her apartment without taking a break.

Earlier this year, a series of infections left Violet virtually hospital-bound and hooked up to an oxygen tank to help her breathe.

She was added to the transplant list in April and expected to be waiting three to six months for a new pair of lungs, in line with average wait times.

But just six days later she received the all-important call and was rushed to hospital where she underwent the critical surgery in the early hours of April 12. 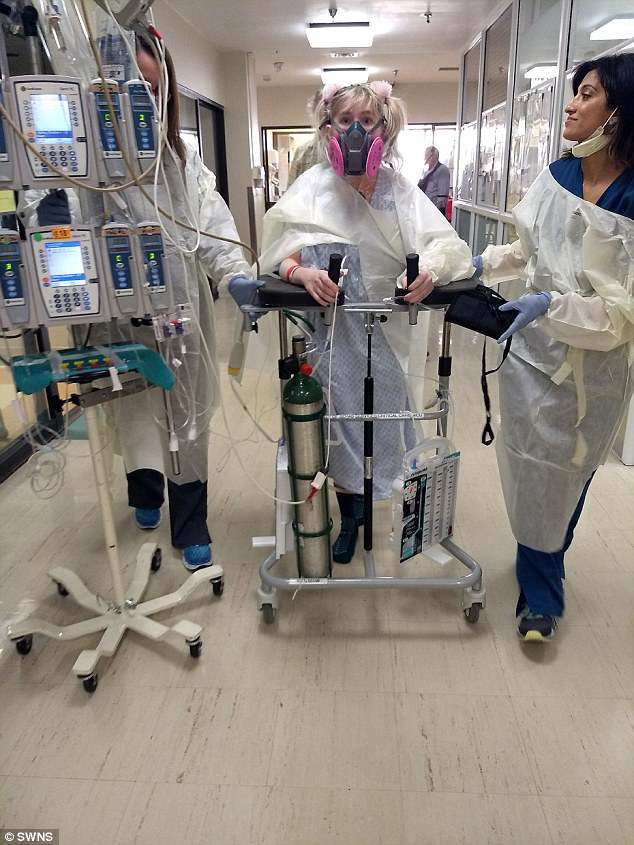 Violet Gomez’s lung capacity had plummeted 20 percent last year by the age of 24. In April, two days after getting a double lung transplant, she took her first steps through the hospital 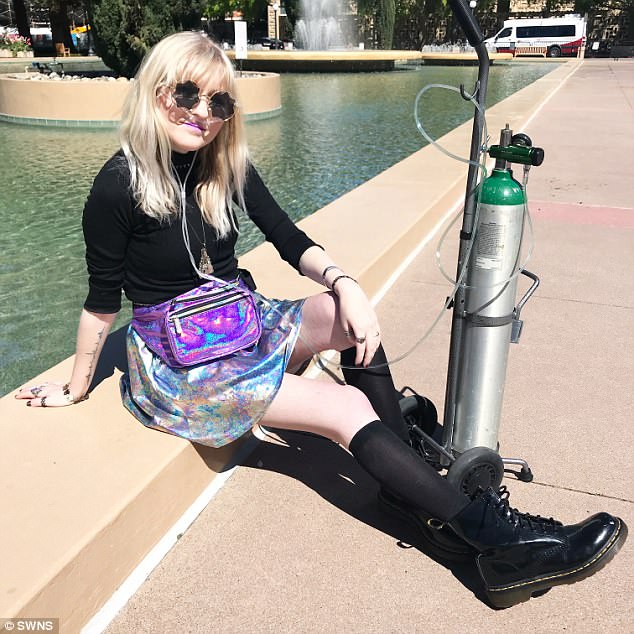 Agony: For months, Violet couldn’t walk the length of her apartment without taking a break. She is pictured here pre-surgery with the oxygen tank she had to wheel around everywhere Violet, who is married to 25-year-old Erik Gomez, a record store vinyl buyer, was diagnosed with cystic fibrosis, an degenerative inherited disorder, at just 11 months old

The aspiring fashion designer, who was unable to work before the transplant but now plans to go to school, said: ‘It is freeing. I feel free.’

‘I couldn’t really live that much of a life before,’ she added.

‘I would be in hospital every two weeks and then home and then back in hospital because I was getting infections very frequently.

‘The doctors were saying, “You are not quite ready for a transplant yet.”

‘They wanted it to be the last resort and felt I wasn’t quite sick enough yet, but I didn’t feel like I was too healthy. I felt awful.

‘Finally, at the end of March, they said, “You are ready, we want to put you on the list”. That was exciting and scary. Finally something could happen but it’s also a huge surgery.

‘Amazingly, six days after I was added they called and said, “We have lungs for you.”‘

Cystic fibrosis is a genetic disease that causes persistent infections in the lungs and limits one’s ability to breathe over time.

A defective gene causes a thick, sticky buildup of mucus in the lungs, clogging airways and trapping bacteria that leads to infections, lung damage and eventual respiratory failure.

Mucus buildup also occurs in the pancreas, preventing the release of digestive enzymes that allow the body to break down food and absorb vital nutrients.

CF is typically diagnosed in infancy and has a life expectancy rate of 37 years old.

There are approximately 30,000 cases of CF in the US, with roughly 1,000 new cases diagnosed each year.

While exercise can help extend lifespan, a transplant is the only concrete effective treatment for people suffering from the incurable genetic disease that causes a build-up of mucus in the airways.

It was a day she had been waiting for her whole life.

And yet, the day she was getting hers, Violet couldn’t believe it: ‘Going into the surgery and being put under, I kept thinking, “Is this going to happen?”

‘I remember waking up and being like, “Oh my gosh, this really happened.” 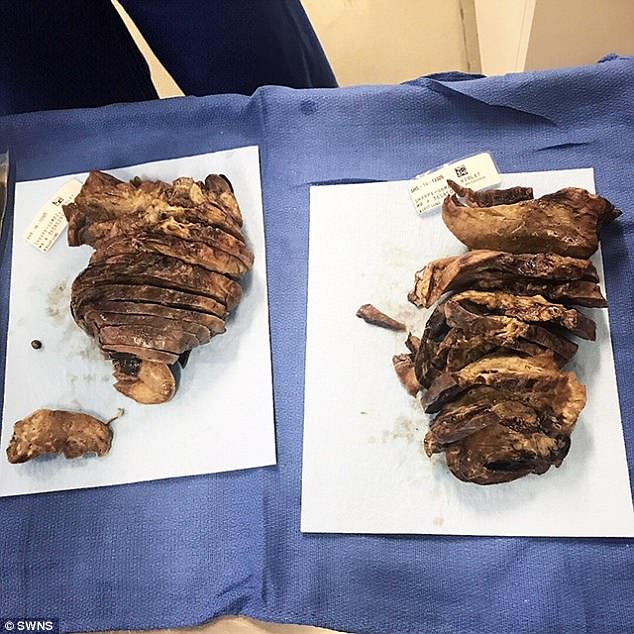 These are Violet’s damaged old lungs, seen days after they were removed and analyzed 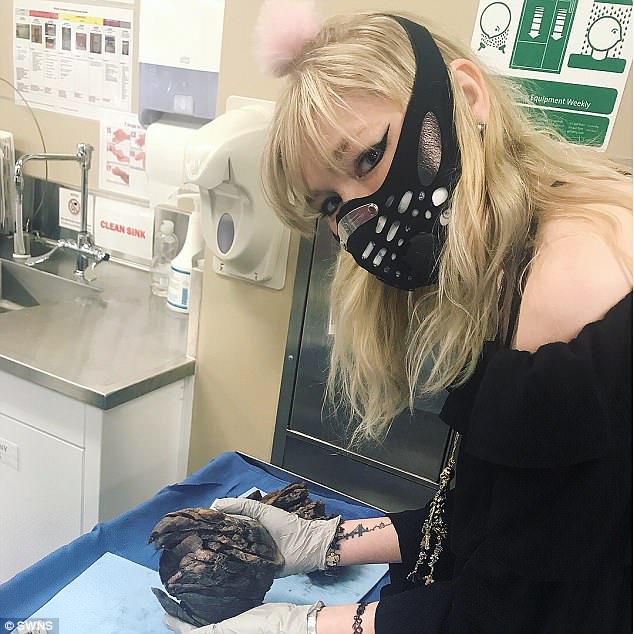 Violet was allowed to hold her old lungs three weeks after the transplant, wearing a protective face mask 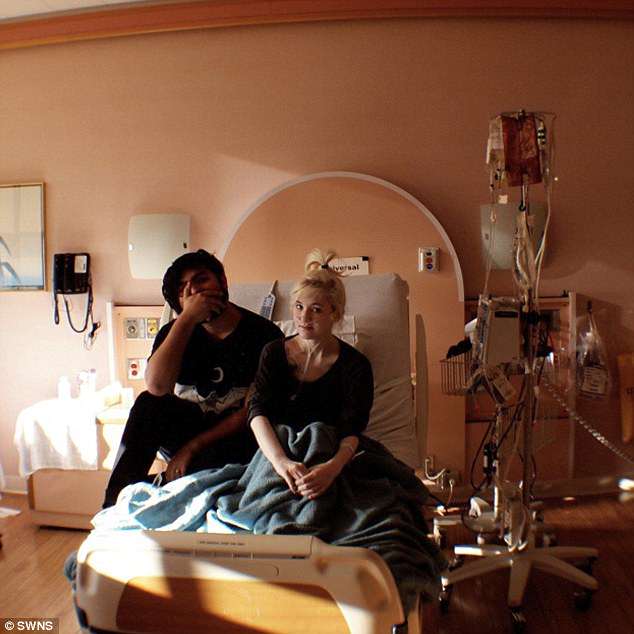 Waiting: After receiving the call that she had lungs waiting for her, Violet and Erik sat in the hotel ward waiting, hooked up to oxygen pre-surgery 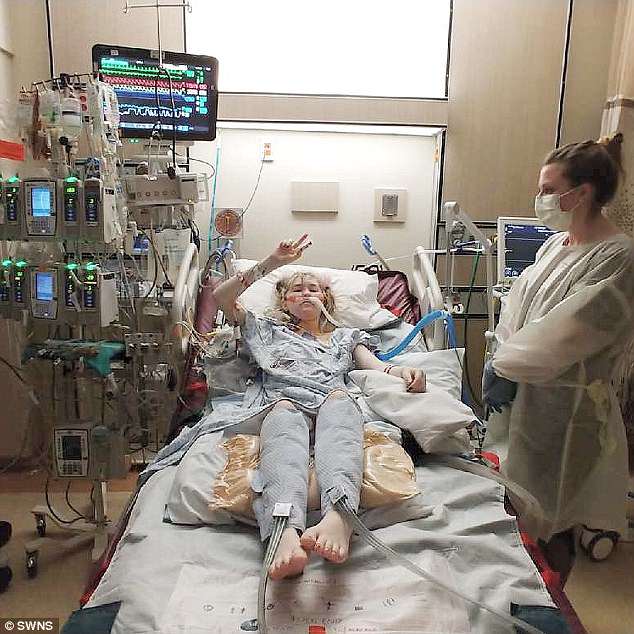 She made it! Violet held up a ‘peace’ sign with her hands just a few hours after the transplant

‘It was different. I could definitely feel that breathing was easier and I wasn’t coughing.

‘My first time getting up walking was two days after the transplant.

‘The physical therapist said I was one of the best patients she’s had when it comes to getting up and walking multiple laps after surgery.

‘She said only about five percent of patients have been able to get up and walk as quickly as I did.

‘Now I can actually walk around an entire mall and not have to sit down or catch my breath.

‘I can do things I haven’t been able to do in years and it has only been a few weeks, so the lungs aren’t even fully inflated yet.

‘It has been really life changing.’ 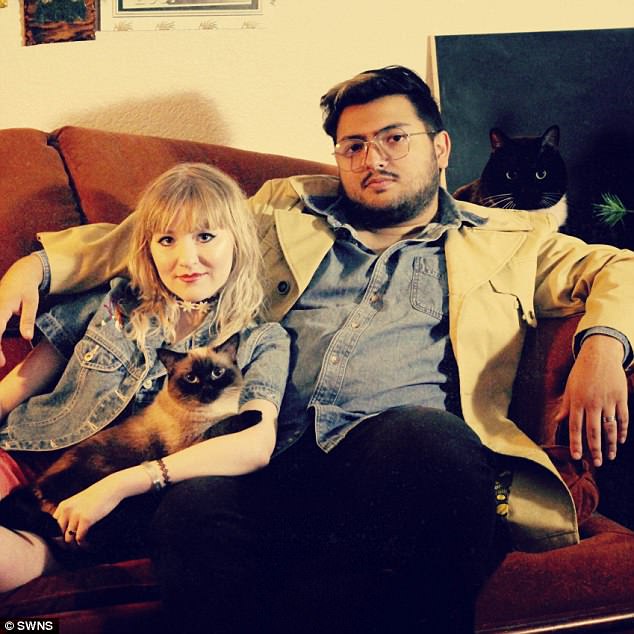 Violet and husband Erik with their cats Sushi and Taki 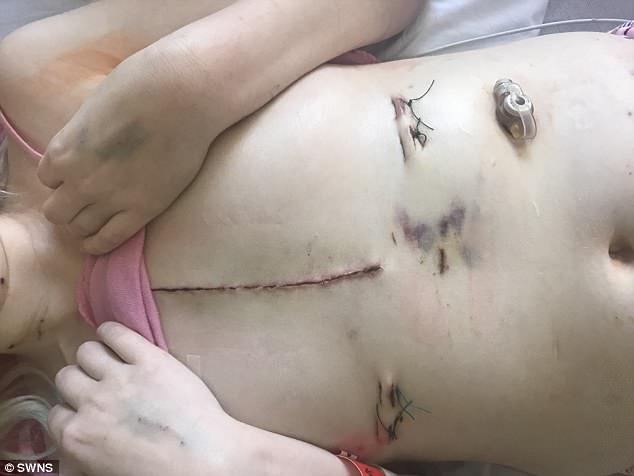 Violet’s scars after nine days. She will have to be on immunosuppressant drugs for life

The disease causes thick mucus to build up in the lungs, pancreas and other organs, resulting in breathing problems.

Violet had no choice but to take ‘lots and lots’ of pills and do four 30-minute breathing exercises per day, wearing a vibrating vest to shake the mucus loose.

She would have been left performing that routine for the rest of her life were it not for the transplant.

She said: ‘Without this transplant I would have kept getting sicker and sicker and if I wasn’t able to have it, within the next couple of years I wouldn’t be alive.

‘My life will be a lot better now. I will be able to go and do things with my friends again and keep up with everybody.’