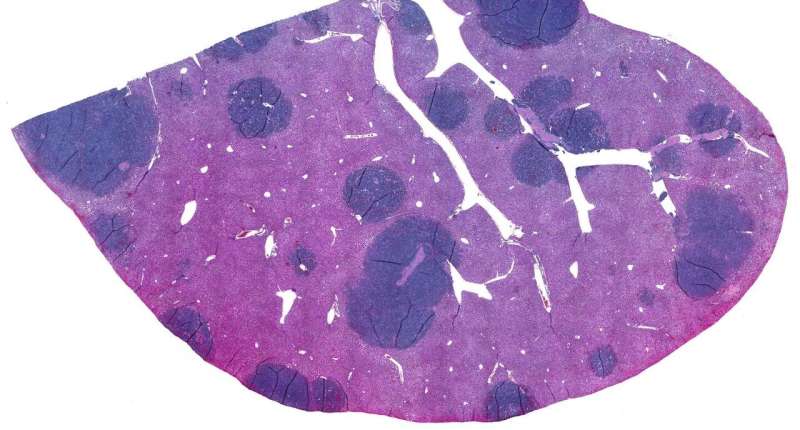 Small cell lung cancer (SCLC) cells are missing a surface protein that triggers an immune response, allowing them to hide from one of the body’s key cancer defenses, a new study led by UT Southwestern researchers suggests. The findings, reported online today in Cancer Research, a journal of the American Association for Cancer Research, could lead to new treatments for SCLC, which has no effective therapies.

Despite decades of study, SCLC—a subset of lung cancer that makes up about 13 percent of lung cancer diagnoses—has a very poor prognosis, with only about 6 percent of patients surviving five years after diagnosis. For the past 30 years, this disease has been treated with a combination of chemotherapies. Although most SCLC tumors initially respond to treatment, the majority of patients relapse within a year.

These tumors tend to carry many genetic mutations—often a good predictor of a strong immunotherapy response. However, says Esra Akbay, Ph.D., assistant professor of pathology and a member of the Harold C. Simmons Comprehensive Cancer Center at UTSW, immunotherapy drugs tend to not work well for SCLC patients, typically extending survival by just a few months.

“SCLC’s inability to respond to immunotherapy made us think that there might be something about these tumors that allowed them to evolve to hide from the immune system,” Akbay says. “We thought there might be defects in how these tumors communicate with immune cells that are supposed to recognize them as cancer.”

To investigate this idea, Akbay and her colleagues looked at publicly available cancer datasets from patient tumors and data gathered from human tumor cell lines at UTSW to compare proteins on the surfaces of SCLC cells against non-small cell lung cancer (NSCLC) cells, which tend to respond better to immunotherapy. They quickly noticed that SCLC cells were missing the surface protein NKG2DL, which is known to interact with natural killer (NK) cells. NK cells make up a key part of the innate immune system, an evolutionary ancient part of the body’s natural defense system that continually monitors for foreign invaders to launch an attack.

Data from mouse models of SCLC confirmed that the rodent version of NKG2DL was also missing from the surfaces of their cancer cells. When the researchers examined the animals’ tumors, they found far fewer immune cells compared with those from mouse models of NSCLC. Additionally, the immune cells in the SCLC tumors weren’t activated and therefore were unprepared to fight.

To better understand what role NKG2DL plays in SCLC immunity, Akbay and her colleagues genetically manipulated SCLC cell lines to force them to produce this protein on their surfaces. When they implanted these cells in mice, they grew smaller tumors and were less likely to spread. These tumors had a significantly higher population of immune cells than SCLC tumors that didn’t express NKG2DL, and far more of the immune cells in tumors with NKG2DL were activated and ready to fight.

Akbay explains that some chemotherapy drugs can induce surface expression of NKG2DL; however, when she and her colleagues dosed SCLC cell lines with these medicines, they didn’t prompt the cells to make this protein. Further investigation showed that the gene for NKG2DL wasn’t mutated, suggesting that this protein was missing due to a problem with turning the gene on, rather than a faulty gene. Sure enough, further experiments showed that in SCLC cells, the gene responsible for making NKG2DL is hidden behind tightly coiled DNA, making it impossible for the cellular machinery that translates this gene into a protein to access it. When the researchers dosed animal models of SCLC with drugs called histone deacetylase (HDAC) inhibitors, which loosen DNA coils, the SCLC cells began expressing NKG2DL on their surfaces, translating into significantly smaller tumors that had more activated immune cells. 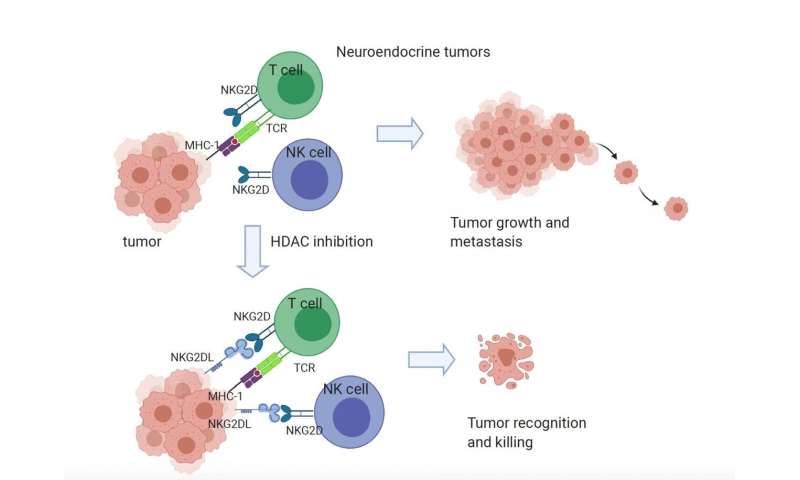 Turning again to a public cancer dataset, the researchers saw that neuroblastoma—one of the most common childhood cancers—is also typically missing NKG2DL on its cell surfaces. When the researchers dosed neuroblastoma cell lines with HDAC inhibitors, they also began expressing surface NKG2DL.

Together, Akbay says, these findings could lead to new ways to more accurately predict a patient’s prognosis and guide better treatment choices for SCLC, neuroblastoma, and potentially other cancers. Patients whose tumor cell surfaces lack NKG2DL may have a more aggressive disease that is unlikely to respond to immunotherapy drugs, she explains. But the hope is that treatment with HDAC inhibitors may spur patients’ immune systems to fight these tumors, enhancing immunotherapy effectiveness.